Striking grad students demanding higher pay just got the opposite

The University of California-Santa Cruz has fired 54 graduate workers after they refused to turn in fall semester grades in an ongoing dispute over pay. 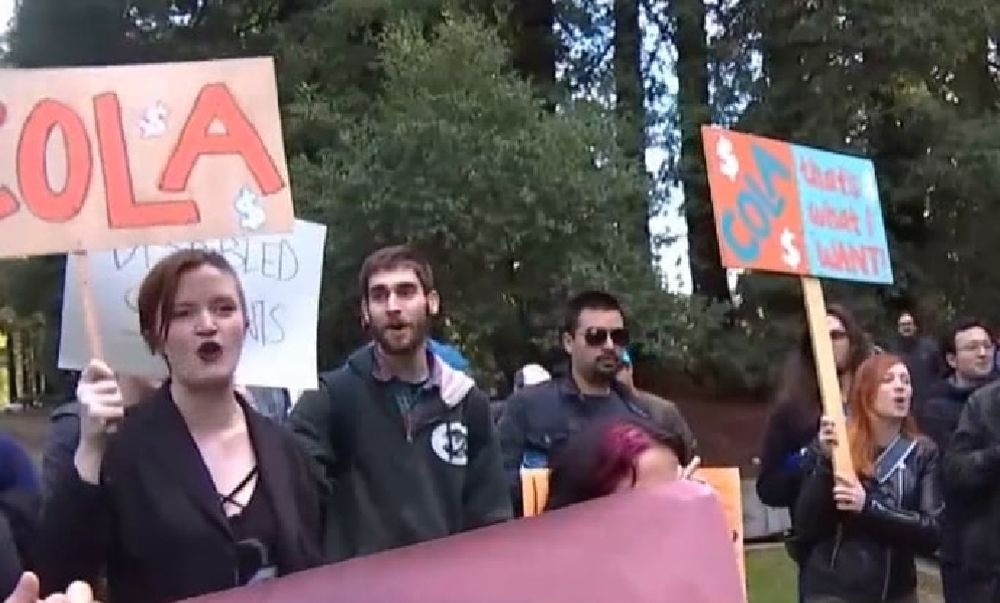 The University of California-Santa Cruz announced Friday it will fire the graduate student assistants who went on strike to protest their pay.

The move comes weeks after UCSC announced in January that it still did not have Fall 2019 semester grades for 20 percent of its students, due to the graduate student assistants withholding students' grades over their dissatisfaction with their own pay.

Prior to withholding grades, the graduate students overtook a campus dining hall and stole food, encouraging others to do the same, claiming the university is "starving" them as student workers. Then, in February, 17 people blocking a roadway while protesting pay were arrested. Five days later, Sen. Bernie Sanders applauded the efforts of those who were "organizing."

"In an effort to better support our Ph.D. and MFA students and help address the very legitimate financial concerns they have raised, we announced and implemented a number of new campus programs to help alleviate their financial burdens – and we are working together to provide greater levels of support," the college said Friday.

Among the actions that the university took to try to satisfy the striking workers were granting them a $2,500 annual housing stipend. The students were demanding a $1,400 monthly cost of living adjustment (COLA).

"Unfortunately, despite our best efforts to find an amenable resolution, 54 teaching assistants have continued to withhold fall grade information. As a result, we have been left with no choice but to take an action that we had truly and deeply hoped to avoid. As I previously shared, students who fail to meet their contractual obligations by withholding fall grade information will not receive spring quarter appointments, or if they have received them they will be dismissed from their spring quarter appointments," the university said. "It is extremely disappointing to us that we have to take such a drastic step, but we ultimately cannot retain graduate students as teaching assistants who will not fulfill their responsibilities. While we have been able to successfully get 96 percent of grades submitted for the fall quarter, we cannot again jeopardize our undergraduates’ education or put them in a position where they may not have the teaching resources they need to succeed throughout the spring quarter," UCSC added.

The graduate students, who do not have the backing of their labor union, responded to the university's decision in a tweet on Friday.

"We are fired and it's official. @UCSC terminated student workers engaged in #ucscstrike strike for a Cost of Living Adjustment (#COLA). Did we get a COLA? No! So why would we stop striking? #cola4all," the group said.

Graduate student workers at other UC schools are now planning protests in support of their colleagues at UCSC.

The dismissal of 54 grads students at UCSC for their fight for a living wage is outrageous and shameful. Let's SHOW UP and SUPPORT @payusmoreucsc this Wed. at noon for a sit-in at both UCSF campuses (PARN: UCSF Library; MB: Genentech Hall) #cola4all pic.twitter.com/gWQLMazzi2

Now is the time to show up for terminated UCSC grad students! pic.twitter.com/1yqRGIFgeE

ALL HANDS ON DECK! Wear #RedForEd & defend our Santa Cruz comrades at the picket on Monday!
The #UCSCstrike & #UCSBstrike continue! No justice, no peace until we get a #COLA4ALL! pic.twitter.com/H848MDQxdP

Sanders also tweeted in support of the fired workers on Friday, calling the university's action "disgraceful."

"All workers deserve the right to bargain and strike for better wages and benefits. To Janet Napolitano and @UCSC: stop this outrageous union busting and negotiate in good faith," Sanders said.

This is disgraceful. All workers deserve the right to bargain and strike for better wages and benefits. To Janet Napolitano and @UCSC: stop this outrageous union busting and negotiate in good faith. https://t.co/oaQGTovOdW

The California Faculty Association expressed its support for the striking student workers just days before they were fired.

CFA’s Letter of Solidarity with Striking Graduate Workers at UCSC and other UC campuses for a Cost of Living Adjustment (COLA). May this level of militancy spread to other sectors of higher education workers, especially here in the CSU. @payusmoreucsc #COLA pic.twitter.com/St9SGky5aT