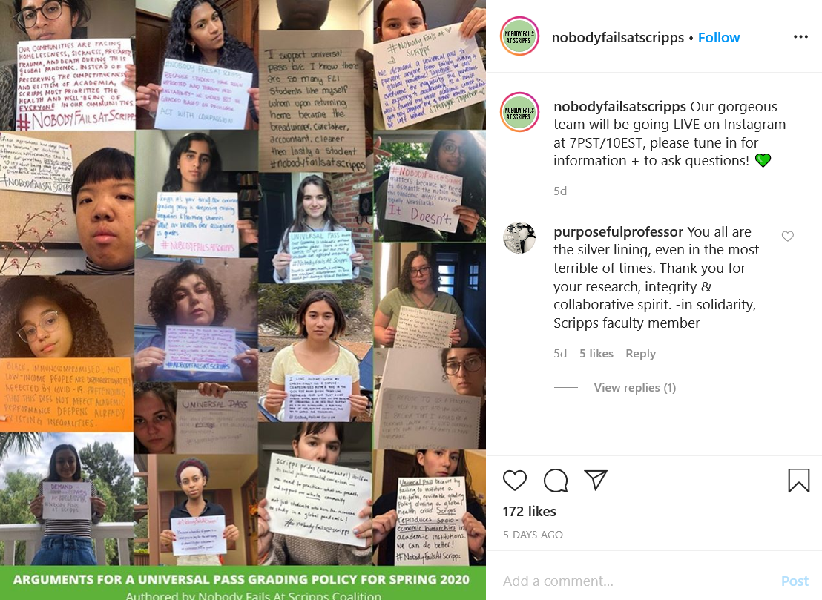 Students at Scripps College in California are demanding everyone get A's, and they're going on an "academic strike" to get there.

Students at the women’s college sent out a survey to ask about interest for an academic boycott of their college. According to the "interest form," "the grading policy as it stands rewards students who are more privileged and are able to complete coursework as usual during a time of deep health, social, and economic devastation which is disproportionately affecting FLI, BIPOC, disabled, immunocompromised, and international students."

“Do these students really want their college to be known as the one that gave up?"

To these organizers, an opt-in pass/fail grading system is not sufficient because “students with the privilege to devote time, energy, and resources to their classes have the ability to maintain a letter grade, while students deprived of such resources would opt-in to the pass/fail system.”

[RELATED: Ivy League prof: Just give everyone an A]

The organizers of the strike listed several ways of potential protesting. These include “refusing to attend online classes and not submitting online assignments, starting Monday, April 20th,” and “Attending Zoom classes with a “#scrippsstrike2020” graphic displayed,” and “no audio or video,” while refusing to submit assignments.

The proposal also asked students if they would participate in “boycotting” course registration if demands had not been met by registration open date.

After surveying students, the group calling itself #NobodyFailsatScripps began circulating a petition, and a formal argument for the proposed All A’s policy.

[RELATED: Ivy League students demand everybody get an 'A']

The National Association of Scholars had some harsh words to say to the student protesters.

“Unless a student is already accomplishing below minimal work they will not 'fail'  and any student who is doing such deserves to fail," Communications and Membership Coordinator for the National Association of Scholars Chance Layton told Campus Reform.

“Professors should be allowed to make their own decisions pertaining to how they assign proficiency for a course, be they graded or pass-fail,” added Layton. “Students ought to know that earning an A only because they pressured a school or professor into giving all students an A is cheapening the quality of their education, not the price. Professors and administrators ought to know the same; neither should give in to such demands.”

“Do these students really want their college to be known as the one that gave up? Or would they rather be part of the many colleges and universities that are riding out this pandemic through learning and achievement? Unfortunately, the student strike points toward the former,” Layton observed.