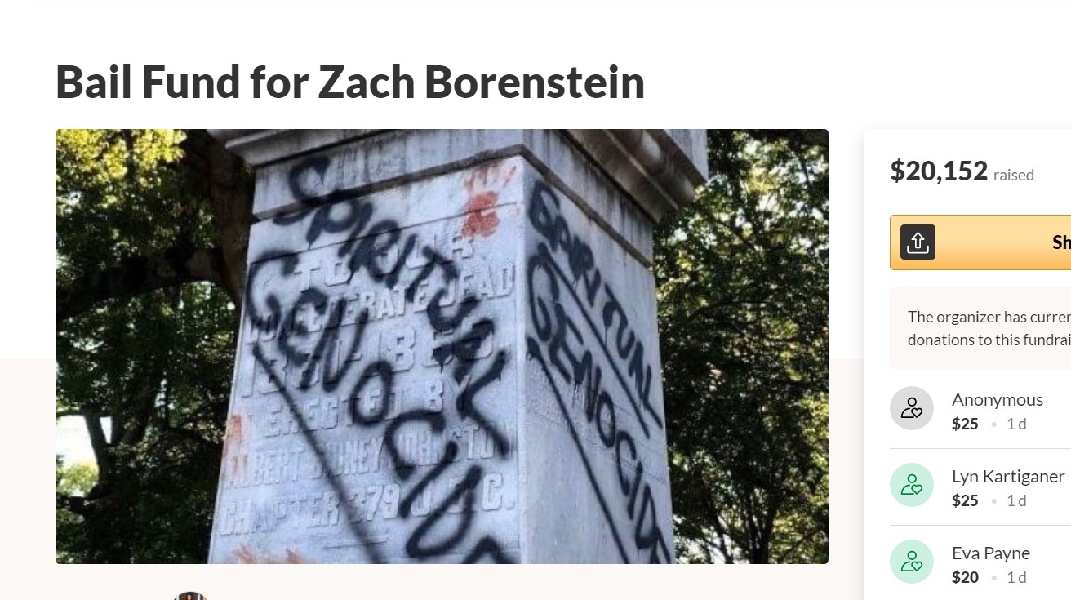 A junior-high teacher was arrested for the destruction of a confederate monument at the University of Mississippi on Saturday.

The phrase "Spiritual genocide" was found spray-painted on the monument, along with red handprints, the Oxford Eagle  reported.

“While I do not necessarily condone vandalism or destruction of property, I will always stand against white supremacy, racism, and oppression, and I will support others engaged in the doing the same—and that’s what Zach did."

Arrested the evening of May 30 and identified as Zachary Bornstein on May 31, the man who defaced the monument graduated from UM with a master of arts degree and currently teaches geometry at Simmons Junior-Senior High School. He has previously criticized the use of “confederate symbology and language” in an op-ed calling for the end to the university nickname “Ole Miss,” because it is "a reference to slave-plantation life that implies fond nostalgia.”

Bornstein faces a felony charge of injuring, destroying, or defacing certain cemetery property, public buildings, schools or churches, or property thereof. His bond was set at $5,000.

Facilities management has tried to power wash the graffiti off of the confederate state on the Ole Miss campus with no luck. pic.twitter.com/1D0sLiA3Xa

The monument, a statue in the form of a saluting confederate soldier, has been the subject of controversy prior to the weekend’s violence.

In February 2019, students protested the statue’s presence on campus, demanding that it be relocated. The Mississippi Department of Archives and History voted in December of the same year to move the statue from its central location on campus to a Confederate cemetery, but in January, the Institutions of Higher Learning Board of Trustees on Thursday delayed voting on the request.

In response to Bornstein’s arrest, Arielle Hudson, a 2016 UM graduate and the college’s first African-American female Rhodes Scholar, started a GoFundMe on Saturday, saying that Borenstein was arrested “after making a strong stance against oppression and racism.” More than 600 donors contributed to her goal of $20,000, which was reached Monday afternoon.

“I created the fund for Zach because I felt it was the right thing to do,” Arielle told Campus Reform. “I knew that Zach was possibly going to be facing felony charges since it is a registered national landmark. I know that could mean a possible, expensive bail bond, and I wanted to be prepared to get him out.”

“While I do not necessarily condone vandalism or destruction of property, I will always stand against white supremacy, racism, and oppression, and I will support others engaged in doing the same—and that’s what Zach did,” she said. “Some of the money will be used to bail Zach out of jail at full cost, and the rest will be donated to the Mississippi Bail Fund Collective to support their efforts to bail out underprivileged Mississippians who are in pre-trial detention.”

While he didn’t explicitly address the vandalism incident, Chancellor Glenn F. Boyce wrote in a May 31 message to students at the University of Mississippi that change in this time means “moving the monument away from the center of campus.”

“That monument has divided this campus, and the process of its removal from the Circle is one I am committed to seeing through to completion. There is more to do, but this needs to happen,” Boyce said.