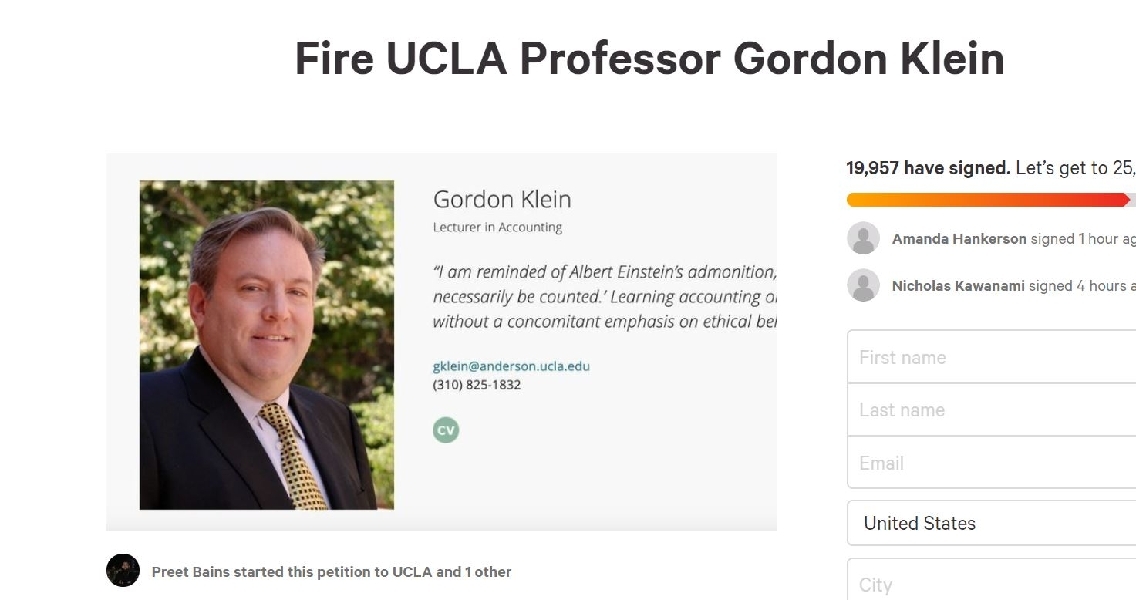 New evidence suggests that the UCLA professor who was suspended after refusing to ease grading requirements on black students was actually expressly told by the diversity chairman not to offer such accommodations.

UCLA lecturer Gordon Klein is now under police protection following his refusal to grant special treatment to minority students in light of the George Floyd protests, the Washington Free Beacon reported Tuesday. A spokesman stated that the Malibu Police Department has increased police presence around Klein’s home in response to multiple threats against the professor.

"The best I can figure out, they needed the sacrificial lamb."

Klein has been suspended for three weeks while the university conducts an investigation of the incident. Campus Reform reported Tuesday that an online petition calling for Klein’s firing had reached more than 20,000 signatures.

An email obtained by the Free Beacon appears to show that Klein was expressly directed not to provide special accommodations. Judson Caskey, the UCLA Anderson School of Management diversity committee chairman, wrote on June 1, “If students ask for accommodations such as assignment delays or exam cancellations, I strongly encourage you to follow the normal procedures (accommodations from the [Center for Accessible Education] office, death/illness in the family, religious observance, etc.)."

Klein maintains that he acted according to this instruction. In an interview with Fox's Laura Ingraham, Klein said, “I got a directive, as did my colleagues, that we should absolutely continue the traditional policy [of] the university, and give the exam as scheduled with only the normal excuses, such as you're in a car accident, you had a death in the family.”

[RELATED: Prof cleared of 'racist' behavior banned from campus a YEAR after investigation]

"The best I can figure out, they needed the sacrificial lamb," Klein speculated. "That's what my colleagues have told me. And I was [easy] to sacrifice when they're weighing the principle of standing on equality of treatment for all students irrespective of color versus trying to placate the angry mob. It was easy for them, at least they believe it was easy for them, to simply jettison me."

The Foundation for Individual Rights in Education, or FIRE, a group that routinely investigates abuses of the First Amendment on college campuses, released a statement Wednesday defending Klein and asserting that UCLA abused its power.

“As a public institution, UCLA is bound by both the First Amendment and the laudable promises of academic freedom it makes to its faculty members,” the statement said. “Given that Klein followed institutional policy when he refused to alter his final exam procedures, this investigation is almost certainly based on the tone or viewpoint of his email, which was — however brusque — protected expression on a matter of profound public interest. Klein must be immediately reinstated, and UCLA’s leaders must make clear that their commitment to academic freedom is stronger than an online mob.”

UCLA’s Anderson School of Management where Klein taught, declined to comment further on the matter.

Wyatt Eichholz is an Alabama Campus Correspondent, reporting liberal bias and abuse on college campuses. He is a student at the University of Alabama studying Economics. Wyatt is also involved in the Young Americans for Freedom chapter on campus and regularly attends RUF events. Last summer, Wyatt attended Generation Joshua’s Statecraft camp in Virginia and had the incredible opportunity to meet Vice President Pence.