The college made the change following a student petition to take the word “freedom” off the cards.

Robert Morris University just announced that it will change its ID card design, making them “RMU ID Cards” rather than “Freedom Cards.” 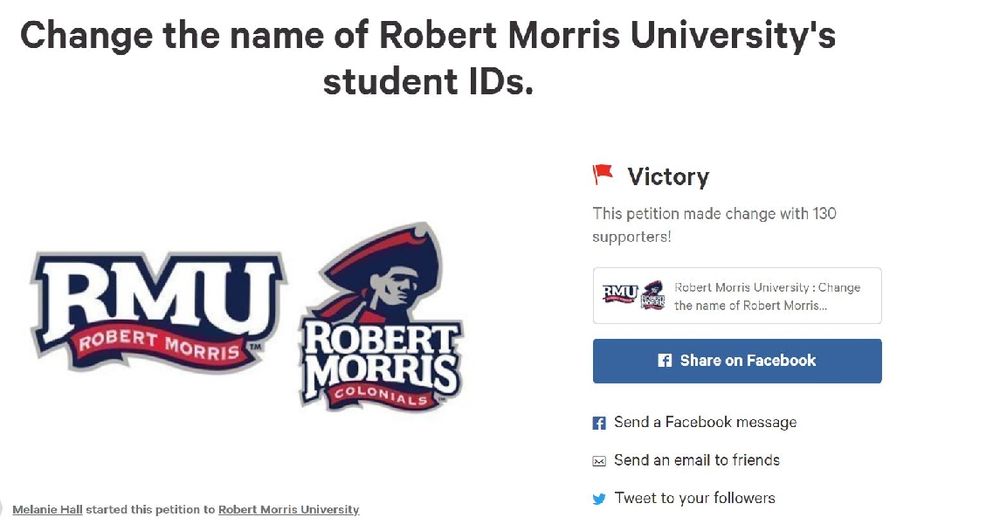 While colleges across the country are removing statues and nixing traditions in the name of “inclusivity,” one university is removing the word “freedom” from its student identification cards because it is “has made minority students” feel “dehumanized.”

The decision follows the circulation of an online petition initiated by student Melanie Hall, who asked the university to rename its ID cards, arguing that the choice of “Freedom Cards” for minority students (who make up 24 percent of students at RMU, according to the petition) was a “poorly named form of identification.”

It “has made minority students (black students in particular) feel like we are being dehumanized. Gifting us with IDs that grant us our ‘freedom’ is of extremely poor taste. Especially coming from a University that is named after a slave owner,” Hall wrote.

“We would like to rename our Freedom Cards to something that is not insensitive,” reads the petition. “If Robert Morris University is the welcoming place that the other 76 percent of students know and love; we ask that these changes be made so that minority students can also feel that same pride in being a Colonial.”

At least 130 people signed the petition before the RMU Dean of Students notified Hall that the name and design of the cards would be changed.

John Michalenko, Vice President of Student Life and Dean of Students, told Hall in an email obtained by Campus Reform that “the Freedom Card is changing its name. The Robert Morris University ID is now the RMU ID Card.”

The college will update the technology of the card as well, Michalenko said.

Jonathan Potts, Vice President of Marketing and Public Relations at RMU, told Campus Reform that the change had been discussed before the circulation of the petition.

“We had already been planning to redesign and rename our student, faculty, and staff identification cards to make them more widely recognized on campus and more easily communicate their purpose,” Potts said, adding that the school “nonetheless thought the time was right to communicate it to the students for whom it was a concern.”

“Success!” Michalenko concluded his email to Hall. “Tell your mom.”