US Attorney fired by Trump gets job at Stanford Law

A former federal prosecutor will take a teaching position at Stanford for the upcoming fall semester. 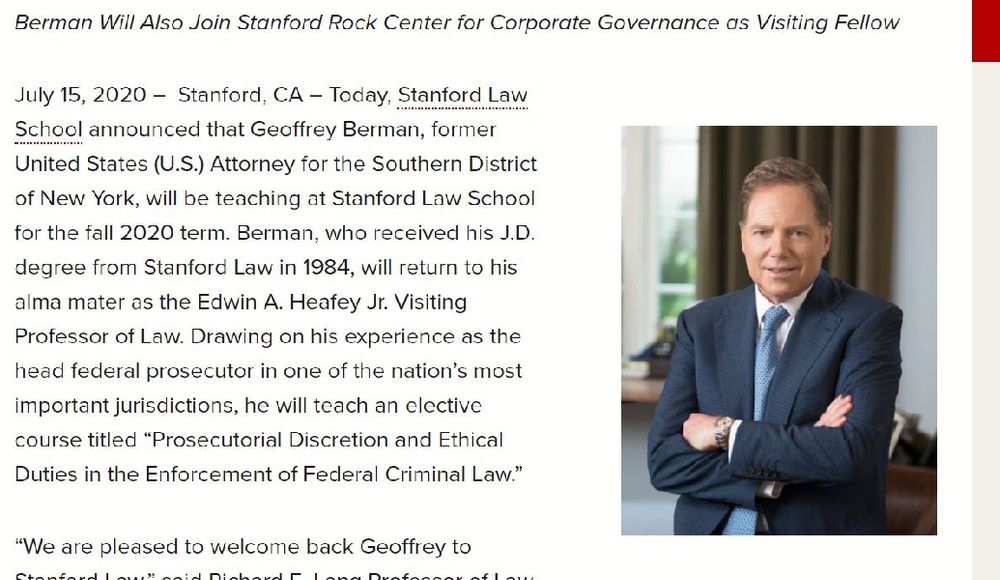 Stanford Law School welcomed a former Manhattan federal prosecutor to a visiting professorship for the fall semester after he was fired by President Donald Trump in June.

Geoffrey S. Berman received his law degree from Stanford Law in 1984 and will return as a visiting professor to teach an elective course titled “Prosecutorial Discretion and Ethical Duties in the Enforcement of Federal Criminal Law,” the school announced in a Wednesday press release.

The former U.S. attorney for the Southern District of New York, Berman will draw from his own experiences as a federal prosecutor.

“Stanford Law School instilled within me and a great many of my peers a passion and respect for public service, and I am thrilled to be given the opportunity to return to share my experiences as a prosecutor with a new generation of students,” Berman said.

[RELATED: Stanford will only house students part-time, expects them to enroll full-time]

Berman’s course will explore how prosecutors make decisions regarding the enforcement of federal criminal laws, including how they determine the crimes they charge, whether or not to charge, and which punishment to administer.

In June, Trump removed Berman from his position as a top Department of Justice official following investigations conducted by the attorney’s office regarding individuals with whom the president worked closely. Berman’s office imprisoned the president’s former personal lawyer, Michael Cohen, according to reporting from the New York Times, and has investigated other Trump associates, including the president’s current lawyer Rudy Giuliani.

Berman formally resigned on June 20, after a standoff with Attorney General William Barr, who announced in a Department of Justice press release that the prosecutor was stepping down. But Berman refused Barr’s request to resign, saying he had no intention of leaving his position, at which point Barr told Berman that the president had fired him and would be temporarily replacing him with his own deputy, Audrey Strauss.

Approving the choice of Strauss as his replacement, Berman agreed to resign from his position, the New York Times reported.

“We are pleased to welcome back Geoffrey to Stanford Law,” Stanford Law School Dean Jenny Martinez said. “Many of our students will go on to careers in criminal law, public interest, and government work and Geoff’s presence on our campus is a unique opportunity for our students to learn from a well-respected and accomplished public servant and professional.”