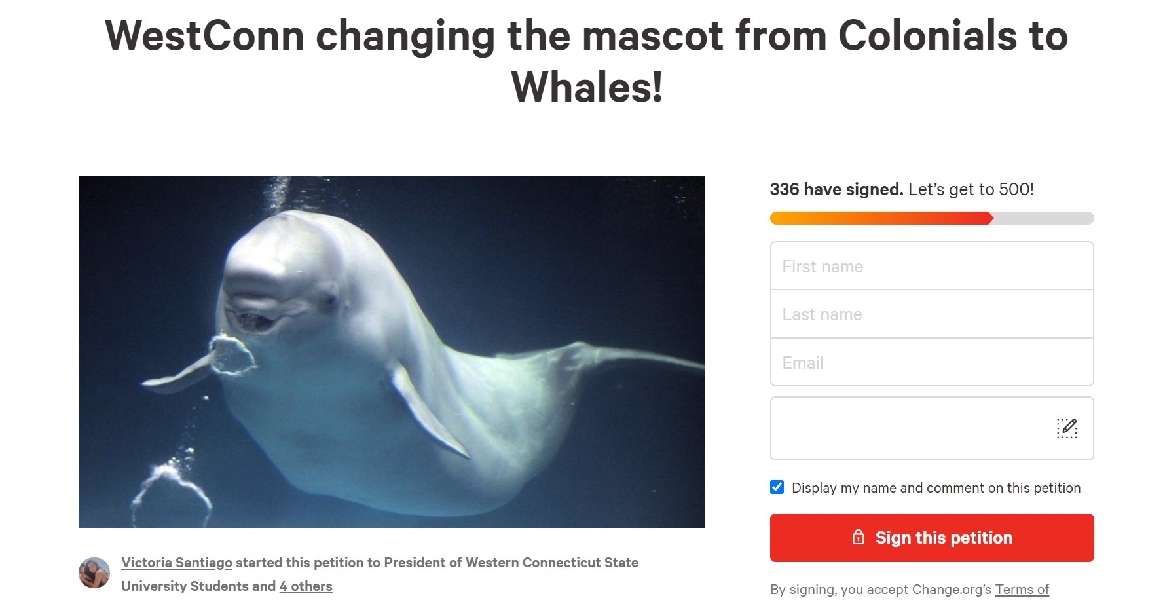 A petition has accumulated more than 300 signatures advocating for the removal of the current mascot and replacing it with a new one. According to the petition, the signatories “want to leave the outdated term, Colonials, behind as it is representative of ethnic violence, genocide, racism, and white male privilege.”

“Whales are associated with compassion and solitude, and knowledge of both life and death."

Instead of being the Colonials, the petition asks that the university switch its name to the “Whales.”

“Whales are associated with compassion and solitude, and knowledge of both life and death,” reasons the petition. “They are also associated with unbridled creativity. The exhalation through the blowhole symbolizes the freeing of one's own creative energies. Sound is also a creative force of life.”

The post features a quote attributed to WCSU President John Clark, which reads, “in response to WCSU students and alumni asking for a replacement of our current mascot, the student government association, the student group speak truth to power, and the university will being a student-driven process to find a new mascot that better reflect today’s Western Connecticut State University - a university where racism and hatred have no home.”

Director of WCSU’s university relations and media relations, Paul Steinmetz, confirmed to Campus Reform that conversations about changing the mascot have been underway for years.

“The Student Government Association and, separately, the University Senate, had been having discussions about the appropriateness of the Colonial mascot, and its embodiment, Colonial Chuck, for the past two to three years,” he stated.

“The killing of George Floyd prompted a lot of discussion among students, alumni, professors, and other interested parties on the WCSU social media pages. Some of the discussion centered on the mascot and nickname, and our president, Dr. John B. Clark, decided it was a good time to address the mascot question with action,” added Steinmetz.

“We believe the Colonial name (replacing the previous name of Indians) came about around the time of the U.S. bicentennial, and there is no denial of the role of Colonial patriots in the founding of the United States and the many lasting benefits they brought about,” said Steinmetz.

“At the same time," he added, "people of color were enslaved by many founders and laws did not support equal rights of others...a good percentage of our students identify as Latino, and for them and their parents, colonialism carries negative connotations on a personal level.”

According to Steinmetz, the school has formed a “committee of students, professors and administrators” to address the mascot change issue.

When asked if WCSU will see the changes happening soon or in the distant future, he said, “the committee is going to meet into the fall semester to ensure student input.”

“We are not sure how long the process will take and there is no deadline,” added Steinmetz.