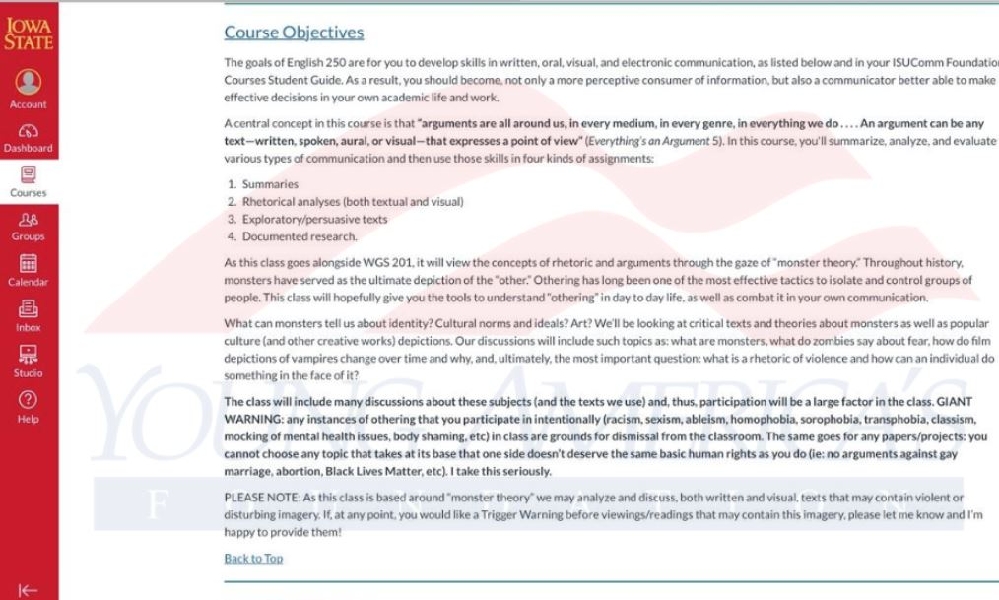 “You cannot choose any topic that takes at its base that one side doesn’t deserve the same basic human rights as you do (ie: no arguments against gay marriage, abortion, Black Lives Matter,etc). I take this seriously."

An English professor at Iowa State University instructed students in her class not to advocate against abortion or the Black Lives Matter movement in any of their writing assignments.

According to Young America’s Foundation, ISU English Professor Chloe Clark stated in her English 250 class syllabus that certain viewpoints are not allowed to be discussed in class or on any assignment.

“GIANT WARNING: any instances of othering that you participate in intentionally (racism, sexism, ableism, homophobia, [sic], sorophobia, transphobia, classism, mocking of mental health issues, body shaming, etc) in class are grounds for dismissal from the classroom,” Clark’s syllabus reportedly stated. She says that the same warning applies “for any papers/projects” as well, and tells students that any writing that goes against abortion, gay marriage, and Black Lives matter will not be allowed.

“You cannot choose any topic that takes at its base that one side doesn’t deserve the same basic human rights as you do (ie: no arguments against gay marriage, abortion, Black Lives Matter,etc). I take this seriously,” the syllabus states.

Clark states in her syllabus that students may request a trigger warning at any time, since the class is based around “monster theory” and some of the content in the class may contain “violent or disturbing imagery.”

According to an article by the Iowa State Daily, Clark led a “Feminist Friday” focus group during the fall 2019 semester where she used monster theory to describe the relationships between thinking of one’s own privilege and “othering” people, which she described as judging those who are different.

During her focus group she told students that using the phrase “illegal immigrant” carries a negative connotation.

Clark also suggested then that “when you’re thinking about the way that you are talking, you don’t have to think ‘Oh no, I am a terrible person because I accidentally othered this group’, instead just be cognizant that you did and then think about how you can do better the next time that you talk about it." She also told students that “You shouldn’t feel guilty, you can’t change the way you were born, but you can use your privilege in productive ways.”

Clark is also part of an online publication called “Cotton Xenomorph.” The website contains a section called “NO CREEPS," which it says means “anything with language of oppression. That means: prejudice, racism, xenophobia, classism, sexism, ableism, serophobia, fat-shaming, intolerance of religion, homophobia, etc."

Iowa State University spokeswoman Angie Hunt told Campus Reform that the syllabus did not follow ISU standards and has been corrected.

“The syllabus statement as written was inconsistent with the university’s standards and its commitment to the First Amendment rights of students. After reviewing the issue with the faculty member, the syllabus has been corrected to ensure it is consistent with university policy,” said Hunt. “Moreover, the faculty member is being provided additional information regarding the First Amendment policies of the University,”

The spokeswoman also said that the university does not take action against students based on the viewpoints they express.

“Iowa State is firmly committed to protecting the First Amendment rights of its students, faculty, and staff. With respect to student expression in the classroom including the completion of assignments, the university does not take disciplinary action against students based on the content or viewpoints expressed in their speech,” she added.

Ryan Hurley, president of the ISU College Republicans, told Campus Reform that he was “disappointed” in ISU when he heard about the syllabus.

“I know those rules are pretty much in most classes now sadly, just not written,” said Hurley. “I was also disappointed at the professor getting a very small slap on the wrist for this, if it had been the other way around (if it had said ‘you cannot support gay marriage, abortion, and BLM’ I’m sure the professor would be fired.”