A statue on the University of Virginia campus was vandalized sometime Sunday night or early Monday morning. 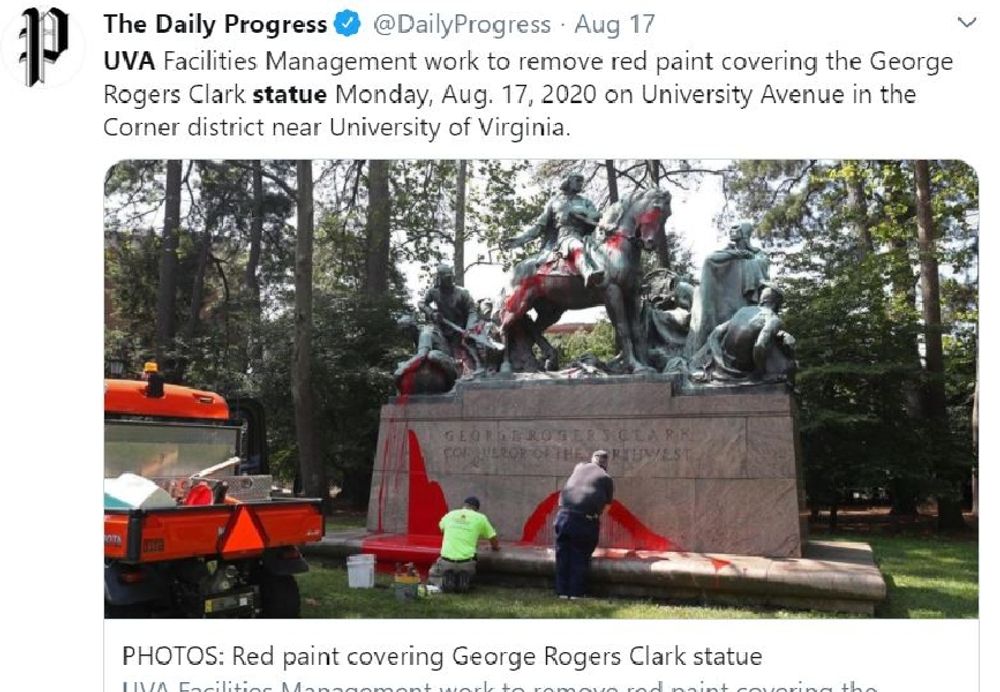 A statue of George Rogers Clark was found covered in red paint on the University of Virginia campus Monday morning.

University police discovered the vandalism just after 5 a.m. Monday, a spokesperson for UVA told Campus Reform in an email.

The statue depicts Revolutionary War-era figure George Rogers Clark, labeling him the “Conqueror of the Northwest” and portraying him surrounded by Native Americans. It was placed on display at the campus in 1921, according to a university publication.

Campus Reform reported previously that a 2019 petition to the university called for the George Rogers Clark statue to be taken down, calling it a “monument to genocide.”

The petition was authored by UVA alum David Swanson, who urged the university to “remove the statue of George Rogers Clark engaged in genocide to a museum where it can be presented as a shameful memory.”

In July, UVA associate dean for social sciences and history professor Christian McMillen wrote about the George Rogers Clark statue, as well as statues of Lewis and Clark on display at the university campus, which he called "monuments to white supremacy."

"They are instrumental in creating and perpetuating the myth of brave white men conquering a supposedly unknown and unclaimed land," McMillen said. "The statues articulate a particular version of history. Unlike the monuments to Lee and Jackson – monuments, at the time, to events from the relatively recent past – the monuments to Lewis and Clark and George Rogers Clark had less to do with memory than they did with an imagined past. And that past was built upon two myths: the myth of the lone frontier hero settling the West and the myth of the vanishing Indian."

McMillen said that George Rogers Clark did engage in struggles with the Shawnee people, including the destruction of their villages, and that Thomas Jefferson, who displayed prejudice against Native Americans, counseled Clark in a letter that the best way to deal with Native people was “total suppression of Savage Insolence and Cruelties.”

However, he also stated that calling George Rogers Clark the “Conqueror of the Northwest” is “absurd,” and that Clark’s role in the tension between the English, French, and Native peoples was a minor one.

The red paint is being removed from the statue, UVA told Campus Reform.

No suspects have been identified so far, and the University of Virginia Police Department is still seeking information about the incident.