The vice president of a College Democrats chapter encouraged new students to join Antifa in a Twitter post.

The Young Conservatives of Texas chapter at the school responded and said it's “not a good look when College Dem’s officers are endorsing a domestic terrorist organization.” 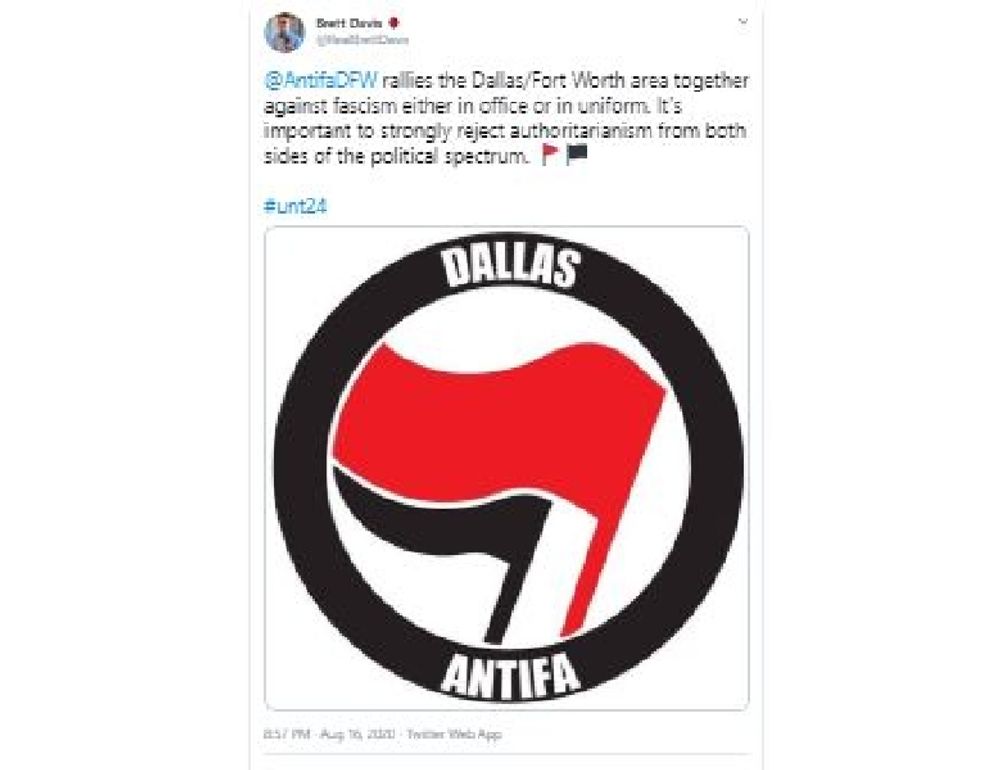 University of North Texas College Democrats Vice President Brett Davis took to Twitter to tell incoming freshmen which student organizations they should join and which to avoid.

“Hey incoming politically left UNT students, here is a thread of clubs on campus and around Denton that you can meet like-minded people and have a safe space to express your views,” the tweet read.

Included on the list is Antifa DFW. Davis tweeted that the group, “rallies the Dallas/Fort Worth area together against fascism either in office or in uniform. It’s important to strongly reject authoritarianism from both sides of the political spectrum.”

@AntifaDFW rallies the Dallas/Fort Worth area together against fascism either in office or in uniform. It’s important to strongly reject authoritarianism from both sides of the political spectrum. 🚩🏴#unt24 pic.twitter.com/vyz03JjPpF

The group repeatedly promotes violence against police officers on its Twitter page.

“F*ck the police and their dead homies. Tear this whole thing down,” one retweet says.

In a now-deleted tweet, Davis addressed incoming conservative students advising them on what groups they should join and not join.

“Finally if you are on the right-wing of the political spectrum I implore you to join @UNTRepublicans and avoid the Young Conservatives of Texas at all costs,” Davis said. 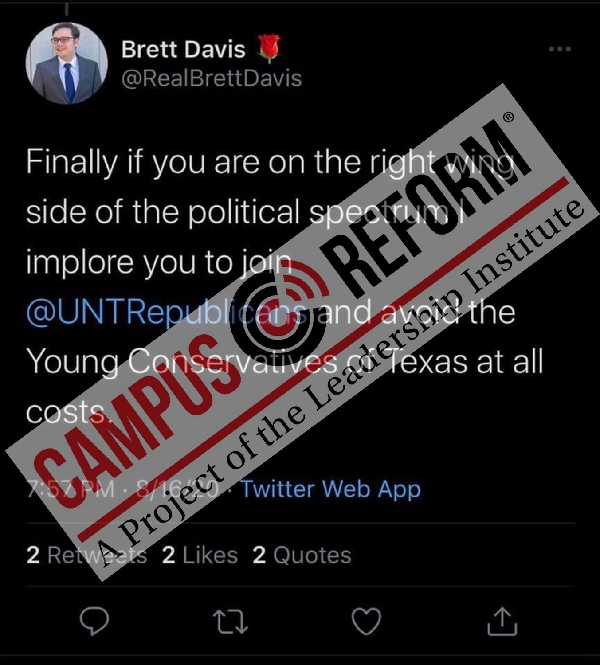 Not a good look when College Dem’s officers are endorsing a domestic terrorist organization https://t.co/UgT6i2mmmJ

Chairman of Young Conservatives of Texas at UNT Kelly Neidert told Campus Reform that she took Davis' action personally because she has been affected by Antifa DFW.

“I was personally very put off by his Antifa endorsement because there is an Antifa DFW member who has tweeted my personal information, and Twitter hasn’t taken it down. I think that’s something Brett should have condemned but he didn’t,” Neidert told Campus Reform.

When asked if YCT was worried about membership following Davis’ tweet, Neidert told Campus Reform, “We were more worried about it damaging our reputation, especially because it was aimed at freshmen/transfers who haven’t been around to see that we’re actually a really good club.”

However, the organization’s membership was not negatively affected, according to Neidert.

“We had a couple of people leave the [organization] but we had even more join,” she said.

A parent of an incoming freshman at UNT who asked to remain anonymous expressed her concern to Campus Reform due to her son’s plan to join YCT: “I consider the behavior by Dems at UNT unacceptable because it reflects poorly on young political organizations as a whole. I’m afraid other schools will also adapt these methods of harassment and in my mind would discourage students from joining the clubs/organizations."

Davis did not respond to Campus Reform’s request for comment in time for publication.