Mount Holyoke Office of Diversity, Equity, and Inclusion shared a post informing students that the pronoun “they” is grammatically correct in the singular use.

However, the post admitted that even if singular “they” isn’t grammatically correct, it’s better to support “gender diverse folx.” 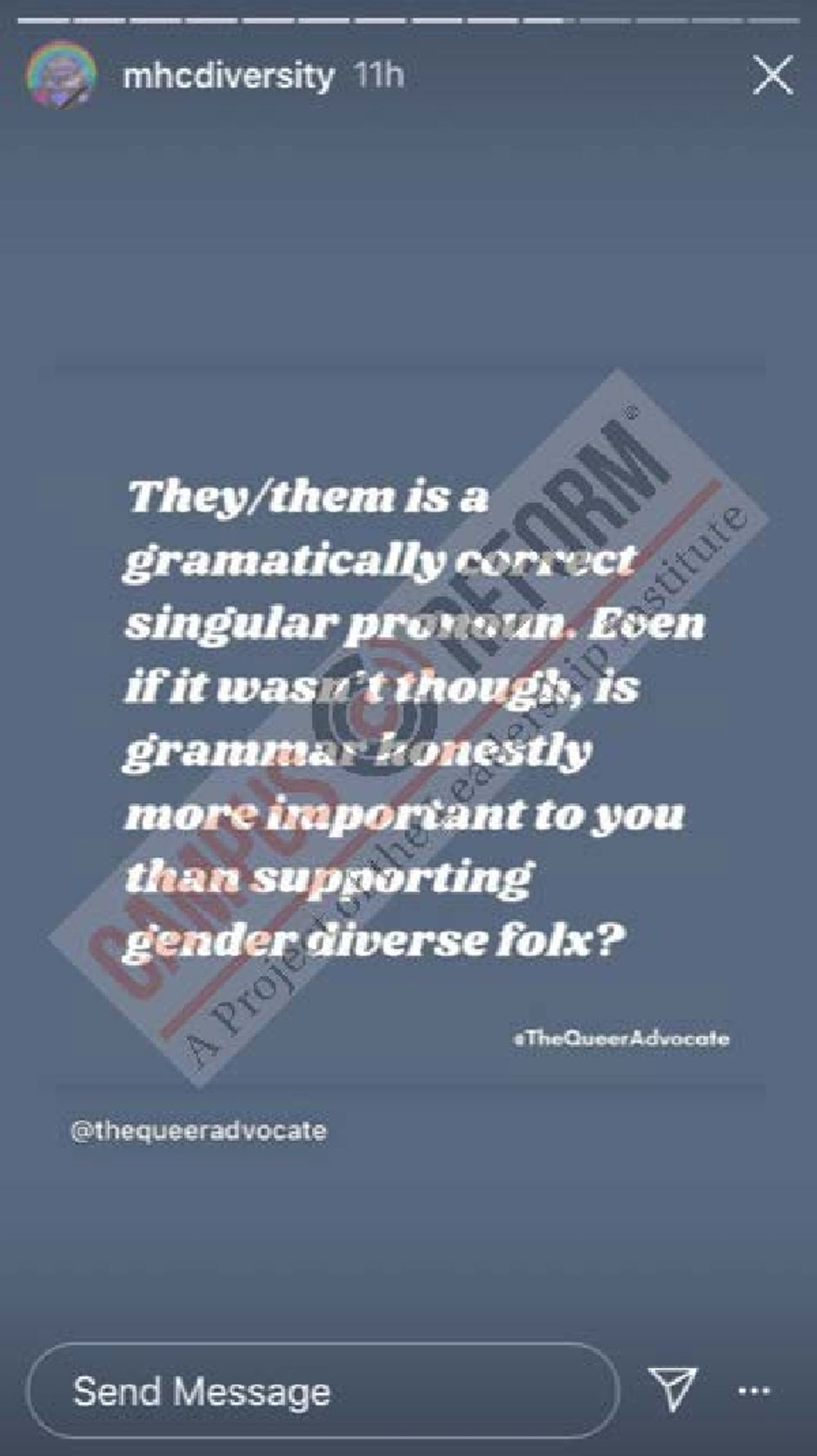 The Mount Holyoke College Office of Diversity, Equity, and Inclusion shared a post on its Instagram story stating that the pronouns "they" and "them" are grammatically correct when used in the singular form.

The post from the school that calls itself “a women’s college that is gender diverse,” also claims that even if they/them isn’t grammatically correct, it’s better to support “gender diverse folx” than to use correct grammar.

“They/them is a [grammatically] correct singular pronoun,” the post stated. “Even if it wasn’t though, is grammar honestly more important to you than supporting gender diverse folx?”

The post, shared by the Office of Diversity, Equity, and Inclusion’s Instagram account, links back to its original source, an account called “thequeeradvocate.” According to the account’s biography, it is run by Stevie Lane, who is “queer, trans & NB [nonbinary]” as well as an "LGBTIQA+ advocate.”

“While ‘they’ is typically associated with being plural, it can also be used in a singular context,” the post caption informs. “It is grammatically correct to use they as a singular pronoun; it has been used in this way since the late 1300s (even Shakespeare used the singular they, Google it!).”

“In 2019, Merriam-Webster named the singular ‘they’ as the Word of the Year,” it continues. “Not long after this, the American Psychological Association (APA) endorsed the use of the singular they in scholarly writing.”

“Having said all of this, you should just respect someone’s pronouns whether it makes sense to you or not,” the post concluded. “It’s a small change that can make a difference.”

[RELATED: Clemson invites students to 'create your own gender']

According to a BBC article, the singular “they” was used in 1386 in response to an unknown “whoso” in Geoffrey Chaucer’s The Pardoner’s Prologue in The Canterbury Tales. Shakespeare also used the singular “them” in Hamlet in 1599 to refer to the word “mother." However, the BBC points out that the singular “they” in these historic works weren’t used to describe someone as gender-neutral, but rather as a way to “specify a role being undertaken by a person.”

In 2019, Merriam-Webster’s Word of the Year was “they,” as the word’s lookup increased by 313 percent that year and more people were coming out as nonbinary or gender non-conforming. Merriam-Webster dictionary updated its definition of "they" in September 2019, which states under its third definition: “used to refer to a single person whose gender identity is nonbinary.”

An American Psychological Association blog post announced that the singular third-person pronoun “they” was endorsed by the APA and updated in the seventh edition of the Publication Manual of the APA. The change for the APA came after the APA Committee on Sexual Orientation and Gender Diversity created bias-free language guidelines for writing about gender.

As previously reported by Campus Reform, Mount Holyoke students, faculty, and staff are encouraged to state their pronouns when they introduce themselves to affirm “the diversity and fluidity of gender identities.”

Anyone who repeatedly refuses to use someone’s preferred gender pronouns can face sexual harassment student conduct code charges. This policy was established in August 2020 after the Supreme Court ruled earlier this summer in Bostock v. Clayton County, Georgia that “sex” in Title VII and Title IX, which originally prohibited the discrimination based on sex, also includes gender expression.

Campus Reform has reached out to Mount Holyoke for comment but did not receive a response in time for publication.