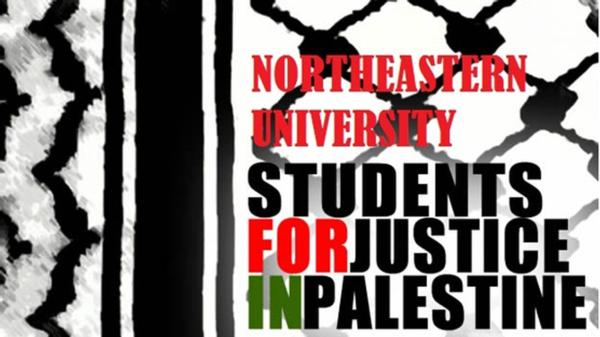 Northeastern University (NU) has suspended its Students for Justice in Palestine (SJP) chapter for repeatedly violating the school’s code of conduct — but the group blames the suspension on racism.

“This unprecedented ban and appalling prosecutions are the latest attempt by the university to suppress pro-Palestine speech, and continues the university’s disturbing history of enacting injustice,” reads SPJ’s statement on the incident.

“It’s hard enough being a brown person with an Arabic name on campus. Now imagine what it was like being treated like a criminal for handing out fliers.” - NU SJP spokesman Max Geller

NU suspended SPJ last week after members of the group placed eviction notices under students’ doors in an attempt to start a discussion about how Israeli forces have removed Palestinians from their homes.

The SJP chapter has had a history of campus controversies, from crashing a Holocaust Awareness Week event in 2011 to NU SJP spokesman Max Geller’s tendency to wear clothing with Hezbollah and Palestinian Islamic Jihad symbols on it, as detailed in an article on FrontPage Magazine.

“It’s hard enough being a brown person with an Arabic name on campus,” Geller said in an article on Mondoweiss, a website which covers Middle East news.

“Now imagine what it was like being treated like a criminal for handing out fliers,” he continued.

But the college has maintained that the suspension is appropriate, especially considering the repeated problems it has had with the group.

“It is about holding every member of our community to the same standards, and addressing SJP’S non-compliance with longstanding policies to which all student organizations at Northeastern are required to adhere,” school officials said in a statement to Boston Magazine.

SJP’s statement also accuses Northeastern of having “truly disturbing values,” offering their own suspension and the school’s refusal to cover sex change surgery in the student health plan as evidence.

The statement also claims that the school plans to expel two students for their involvement in the mock eviction notice incident, but the school has denied these claims, according to Boston Magazine.

The group also held a protest and drafted a petition — which has approximately 6,000 signatures — demanding that the group be reinstated on campus.

The group will be suspended for at least a year, according to Mondoweiss.