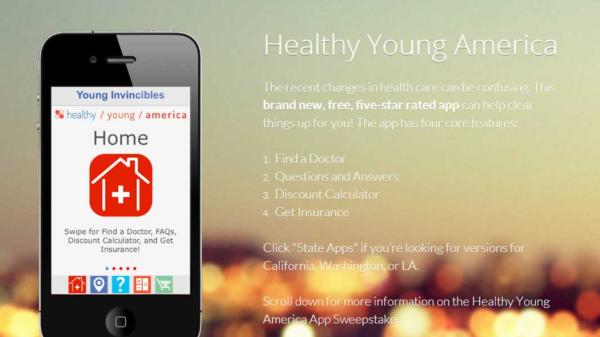 A pro-Obamacare group is offering young people a cash prize in a last-minute attempt to convince enough of them to sign up to meet the administration’s goals before the March 31 enrollment deadline.

The White House has said it needs at least 40 percent of Obamacare enrollees to be young, healthy people to offset the costs of covering older, sicker ones. But just two weeks before the deadline, youth enrollment sits at 25 percent, according to a March 11 Department of Health and Human Services report on February numbers.

“We are doing everything we can to get the word out about the law’s financial assistance and the March 31st deadline to get covered.”

The administration has no record of how many of those who signed up have actually paid their premiums.

Young Invincibles, a nonprofit based in Washington, DC, has launched the Healthy Young America App Sweepstakes, which gives youth a shot at a $1,200 cash prize for downloading and using their healthcare signup app or sending an entry card in the mail.

The app allows young people to sign up for health insurance using their phones, according to the group’s official website.

Although the sweepstakes runs through the fall, the group’s deputy director told MarketWatch it hopes the initiative will boost enrollment before the deadline.

“This last month is going to be a huge push for educating young adults,” Jen Mishory said.

In the group’s official statement on the February enrollment numbers, Young Invincibles Executive Director Aaron Smith also stressed the importance of getting more young people to sign up before the end of the month.

“It’s go time,” he said. “We are doing everything we can to get the word out about the law’s financial assistance and the March 31st deadline to get covered.”

Young Invincibles did not respond to a request for comment from Campus Reform in time for publication.