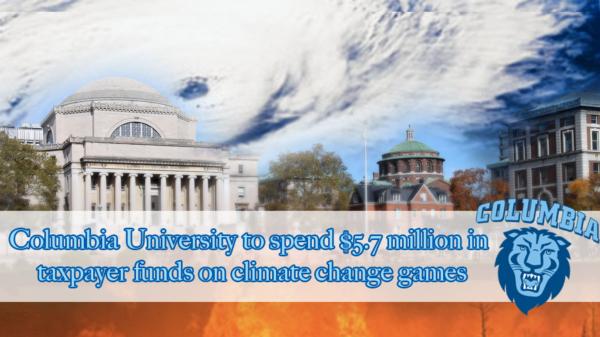 Columbia University has received millions in taxpayer funds to create games depicting horrible scenarios that could come about as a result of climate change, including a series of mock voicemails of people screaming, gasping for air and being swept away by waves.

"If the tsunami doesn't get us, the heat might,” a man says in a voicemail to his mother set in 2065. “I’m just calling to say I love you and I miss you and it might be the last time you hear my voice. Bye.”

“I’m just calling to say I love you and I miss you and it might be the last time you hear my voice. Bye.”

Other callers include a man screaming as he is suddenly swallowed up by a giant tsunami and a woman desperately gasping for air because she is “Out of CO2 credits.”

The National Science Foundation (NSF) issued Columbia a $5.7 million grant for its PoLAR Climate Change Education project to use games to “engage adult learners and inform public understanding and response to climate change.”

The website featuring the fake voicemails, called Future Coast, was created in response to these guidelines.

Other predictions foretold in the voicemails include that all of the glaciers in the Sierra Nevada will be gone by 2038, and that most of the coasts and beaches will “have disappeared” by 2059.

In a voicemails set in 2020, a frustrated man tells his mother he can’t afford to attend Thanksgiving dinner because a family member spent all of his money on hurricane simulation booths which are now useless because “everyone has been in a gosh darn hurricane now.”

Columbia received the grant in September of 2012, and it expires in August 2017.

Neither Future Coast nor NSF responded to requests for comment from Campus Reform in time for publication.