MIT takes God out of graduation 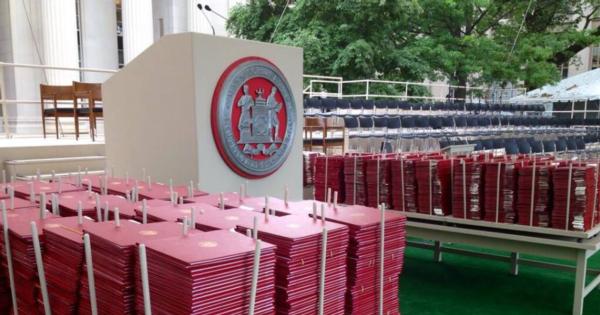 Traditionally, MIT Chaplain Robert Randolph has given a religious prayer at the ceremony, as he prayed to the “God of Abraham, Jesus and Mohammed” during last year’s graduation. However, MIT’s Commencement Committee emailed undergraduates announcing the change in May.

"If the administration wants to accommodate everyone, it should minimize exclusion."

This sudden reversal comes from the widespread discussion of an op-ed written by student Aaron Scheinburg in the university’s paper. Scheinburg claimed that, “[i]t would be so easy — embarrassingly easy — to extend [the prayer's] message to 100 percent of students by simply not invoking religion.”

“If the administration wants to accommodate everyone, it should minimize exclusion, not average presumed personal preferences. Simply not mentioning God would exclude no one. Choosing neutrality would just be like all the other days when MIT doesn’t endorse a religion,” Scheinburg wrote.

In an interview with Campus Reform, Randolph explained that the situation was brought up suddenly and had to be quickly addressed by the administration.

“[This issue is] not something that’s come up before...we are familiar with the fact that we are a diverse community, and so we have many faiths represented, but we have never had a conversation prompted by a group that felt that they were left out since they didn’t believe in any higher power. Their solution, which was not to have any kind of invocation, was not an acceptable solution either,” Randolph said.

Randolph began his invocation by addressing the controversy around the issue.

“Some of you are aware that this portion of the commencement program got a bit of conversation started here on campus this year. As is often the case when thoughtful people talk about important matters, everyone benefited,” Randolph said.

The chaplain then began his secular prayer by stating that “[t]oday is the beginning of a new chapter in our collective lives, we have come from many places and we are grateful for the shared energy we have found here.”

Rather than end the invocation with a traditional ‘amen’, Randolph finished with a Maya Angelou quote.

“You may have the grace to look up and out and into your sister's eyes, into your brother's face, your country and say simply very simply with hope good morning.”

This generic invocation will not necessarily become precedent. Though Randolph believes it's necessary to be serious about inclusion, “we have to recognize that being quiet and being silent is not a solution to the problem either…[t]here are other ways to solve the problem. We could have each year a different chaplain from a different tradition, including the humanist tradition, offer an invocation.”

The conversation surrounding prayer at graduation was deemed beneficial to the MIT community by Randolph, even though it did not fit his own personal views.

“I personally benefited by having to go back and think about this whole question again, about what inclusion means. I’m not sure that the solution is going to be satisfactory to everybody, and I’m not sure that the solution will be satisfactory to me, but I think that we have to have a conversation,” Randolph said. “That’s the commitment for the fall.”

The full commencement address can be viewed online; the invocation starts at 38:04.