University removes Bill Cosby from Board of Advisors 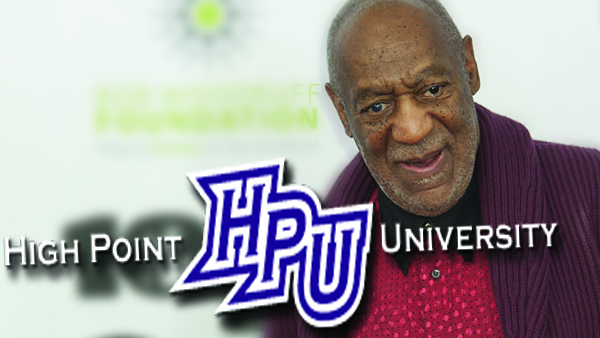 High Point University (HPU) has removed actor Bill Cosby from its National Board of Advisors after multiple sexual assault accusations surfaced in the last month.

"In the best interest of all parties, we are removing his name from our board of advisors until all information about this matter is available,” a spokesperson for HPU said.

Cosby, 77, has only been a member of HPU’s board since July when he joined Gen. Colin Powell, and Steve Wozniak, co-founder of Apple Computer Inc.

Qubein then called Cosby an inspiration to America.

In the last month, allegations of sexual assault have surfaced from at least 15 women, including former actress Barbara Bowman, actress Michelle Hurd, and former supermodel Janice Dickinson. No charges have been made against Cosby.

“The new, never-before-heard claims from women who have come forward in the past two weeks with unsubstantiated, fantastical stories about things they say occurred 30, 40, or even 50 years ago have escalated far past the point of absurdity,” Cosby’s lawyer, Martin Singer, said in a statement issued Friday in response to the accusations and published by the Associated Press.

Singer also said the accusations “are becoming increasingly ridiculous” and said it was “illogical” that so many women would not have said something or reported the assault in the many years that it allegedly happened.

“It is long past time for this media vilification of Mr. Cosby to stop,” Singer said.

Cosby, a Temple University alumnus, sits on the school’s Board of Trustees where he has been a member since 1982. Temple has decided to let Cosby remain on their board.

“Dr. Cosby remains a Temple trustee,” said a spokesman for the university on Thursday, but declined to comment further.

Cosby, best known for his fatherly role as Dr. Cliff Huxtable in The Cosby Show, has stayed quiet since the recent allegations started. Though he continues his standup tour, NBC has canceled Cosby’s sitcom that was in development, TV Land stopped playing reruns of The Cosby Show, and Netflix postponed releasing a standup special called Bill Cosby 77.