SOU tells students size DOES matter when it comes to privilege 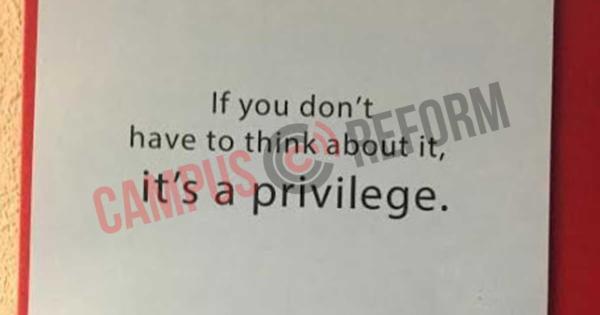 A school-sponsored poster campaign at Southern Oregon University is encouraging Christian, neuro-typical, cisgender, and other “normal” students to “check” their privilege.

The posters put up by SOU’s Bias Response Committee have generated a fair bit of controversy, according to The Siskiyou, leading the school to host public meetings this week and last to foster respectful discussion of the matter.

“If you don’t have to think about it, it’s a privilege,” states the prominent wording on one poster, which goes on to define privilege as “unearned access to social power based on membership in a dominant social group.” 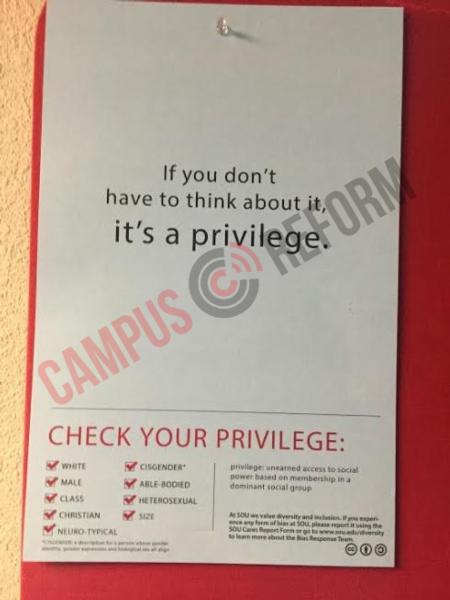 Another poster seeks to clarify what is being asked of the students, explaining that “becoming aware of privilege should not be viewed as a burden or source of guilt, but rather [as] an opportunity to learn and be responsible so that we may work toward a more just and inclusive world.”

At the bottom of each poster is a checklist to help students determine whether they have any privileges in need of checking. In addition to the now-familiar “white” and “male” privileges, the list also mentions privileges based on social class and size, as well as those conferred upon individuals who are Christian, neuro-typical, cisgender, able-bodied, or heterosexual.

For those in need of clarity, the poster defines “cisgender” as “a description of a person whose gender identity, gender expression, and biological sex all align.”

A disclaimer on the poster describes the campaign as part of SOU’s commitment to diversity and inclusion, and instructs students to file an “SOU Cares Report” with the Bias Response Team if they “experience any form of bias,” whether related to privilege or not.

The intent of the poster campaign is “to provide awareness that privilege does exist, and explain that privilege does not just pertain to race but that there are other forms of privilege,” Associate Director of Student Life – Diversity and Inclusion Marjorie Trueblood-Gamble told The Siskiyou.

“We wanted to start a dialogue … and I would say we succeeded,” she continued, saying she was pleased that the first public forum last week featured diverse perspectives rather than a “proverbial choir” of supporters. 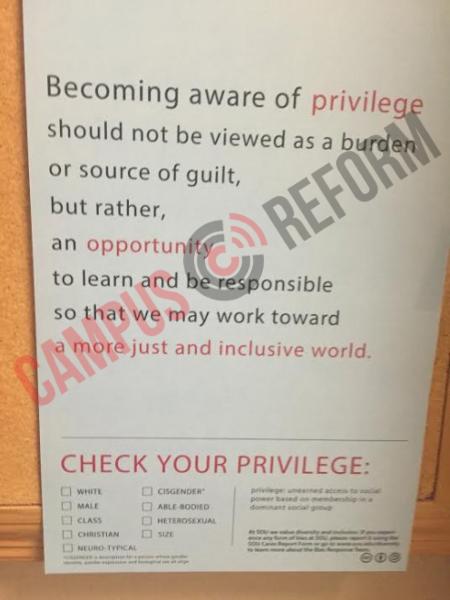 “I believe they are segregating and dividing the population by targeting certain groups,” opined SOU student and Marine Corps veteran Tim Short, one of the attendees objecting to the posters. “I don’t see why we have to divide people up into separate groups.”

Trueblood-Gamble countered that the posters are not intended to alienate anyone, adding that simply having a privilege does not preclude a person from being marginalized in other ways.

“The differences that we analyzed are just one aspect of people’s identities, now it doesn’t mean that because you have this identity it trumps the other ways that you might be marginalized,” she explained. “It’s just to be aware that you may have advantages that other people don’t, and to hopefully break down barriers and make people more empathetic with others.”

The posters put up on SOU’s campus were taken directly from the “Check Your Privilege” campaign at the University of San Francisco, with the Bias Response Team deciding which messages to replicate.

Additional templates offered by USF elaborate on each of the privileges listed, explaining for instance that “if you can use public bathrooms without stares, fear, or anxiety, you have cisgender privilege,” and “if you can expect time off from work to celebrate your religious holidays, you have Christian privilege.”

*Campus Reform reached out to Trueblood-Gamble for additional information about the poster campaign and the controversy surrounding it, but had not received a response by press time.