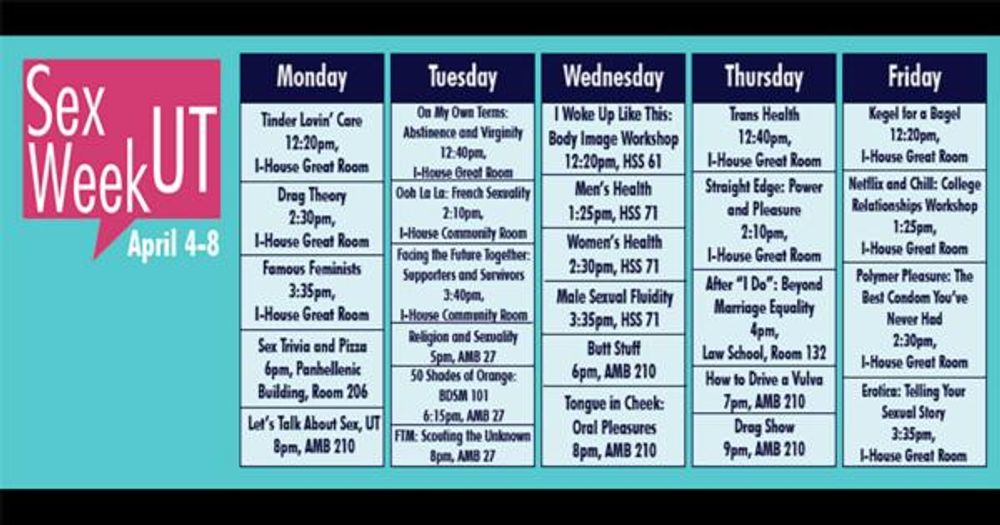 According to a schedule provided to Campus Reform, UT’s fourth annual Sex Week will take place April 4-8, with between four and six events scheduled for each day.

[RELATED: U of Tennessee to cut state funding for controversial Sex Week]

The event series came under fire again in 2014, leading legislators to pass a resolution calling on the school to allow students to opt out of paying student fees for programs they find “controversial or objectionable.” University President Joe DiPietro endorsed the measure and UT implemented the opt-out provision later that year.

Sexual Empowerment and Awareness at Tennessee (SEAT), the student group responsible for organizing Sex Week, boasts that it “was able to privately fundraise the lost funding in 36 hours with the public's help” in 2013, and has been able to rely on private donations to fund the program ever since.

This year’s schedule includes some events that have been featured in past Sex Weeks—such as a drag show that SEAT claims has been among the most popular events in previous years—but also includes new programming such as a lecture on “Tinder Lovin’ Care” and an event called “Tongue in Cheek: Oral Pleasures.” Other events have disappeared from the schedule since last year, most notably a workshop titled “Road Head: The Role of the Automobile in American Sexuality.”

[RELATED: UT to give students crash course of road head, history of sex in cars]

Full descriptions of this year’s programming has not been made available on the Sex Week website, though the group does offer brief outlines of the eight topics it seeks to address through the events: abstinence, virginity, sexual orientation, safety, gender, pleasure, empowerment, and society and culture.

With regard to abstinence, SEAT promises that “the possibility of practicing a sex-positive form of abstinence will be explored in addition to sex education methods that teach abstinence without denying that sexuality is fundamental to the human experience.”

The approach to virginity will focus on “the historical roots and manifestations of ideas about virginity, including its often gendered connections to religion and the prescribed set of sexual behaviors generally associated with ‘losing’ or ‘keeping’ one's virginity.”

The group also asserts that “every program we host will be in a safe space and friendly towards the LGBTQ community, and several events will cover topics relating to LGBTQ sexuality,” including asexuality.

The most controversial topic explored during Sex Week, however, is that of sexual pleasure, which SEAT describes as “a key element of the sexual experience.” Throughout the week, they say, there will be numerous events “that teach participants how to define what they want and communicate that to their partners in a way that makes sexual activity pleasurable for all involved.”

To that end, Sex Week 2016 will feature workshops such as “Ooh La La: French Sexuality,” “How to Drive a Vulva,” and “Polymer Pleasure: The Best Condom You’ve Never Had.”