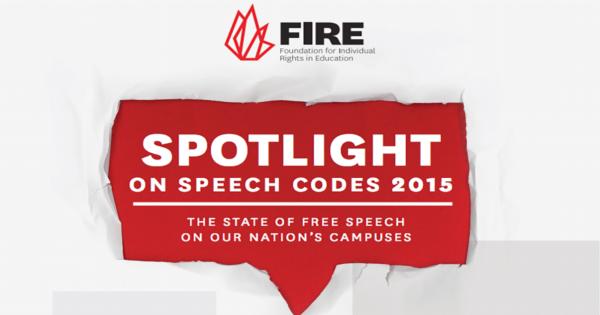 Thirty-three public colleges have elected to ignore a deadline to respond to the House Judiciary Committee’s request to adopt new speech codes on campus.

Bob Goodlatte, who chairs the House Judiciary Committee, asked 160 schools to change at least one of their existing policies after a Foundation for Individual Rights in Education (FIRE) report showed that these schools substantially restricted their students’ free speech rights.

“Speech codes...have repeatedly been struck down by federal and state courts.”

In the August report, (FIRE) found that 55 percent of 437 public institutions were worthy of FIRE’s “red light” label for having “at least one policy that both clearly and substantially restricts freedom of speech.”

To qualify for the “red light” label, a policy must be both “clear,” meaning the policy on its face is a threat to free speech and “does not depend on how it is applied,” and “substantial,” meaning it broadly restricts a specific form of speech on campus.

Only 18 schools of the 437 that were surveyed received a “green light” label, meaning the school’s written policies do not pose a serious threat to free speech.

“Speech codes – policies prohibiting student and faculty speech that would, outside the bounds of campus, be protected by the First Amendment – have repeatedly been struck down by federal and state courts,” Lukianoff told the committee. “Yet they persist, even in the very jurisdictions where they have been ruled unconstitutional.”

After the hearing, Goodlatte sent a letter to 160 public institutions demanding the schools take steps to improve their policies.

Goodlatte, who all but threatened congressional action, asked university leaders to state “what steps [their] institution plans to take to promote free and open expression on its campus(es), including any steps toward bringing [their] free speech policies in accordance with the First Amendment.”

Goodlatte gave the schools until August 28 to respond to his request. Now, several months later, 33 schools have plainly ignored the congressman’s request, prompting Goodlatte to issue a second letter to the non-compliant universities.

The 33 non-compliant schools are:

University of Alabama at Birmingham

Goodlatte generously provided the schools with a second deadline of February 25.

A FIRE blog post indicated that many universities are willingly complying with Goodlatte’s request, and several of the schools that received his first letter were already in contact with FIRE about reforming their speech codes. Campus Reform reached out to the House Judiciary Committee to ask what schools missed the August deadline, but received no response by press time.