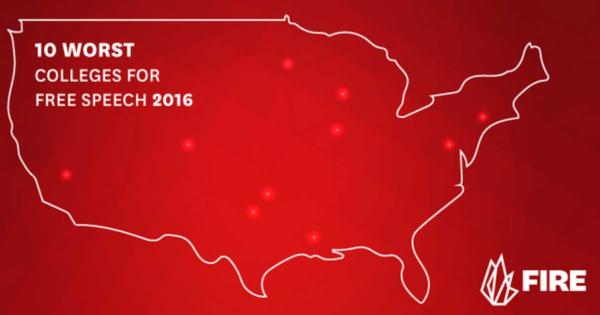 The Foundation for Individual Rights in Education (FIRE), recently released its annual list of universities that are notoriously bad for freedom of speech for 2016.

FIRE’s mission is to “defend and sustain individual rights at America’s colleges and universities. These rights include freedom of speech, legal equality, due process, religious liberty, and sanctity of conscience.”

FIRE closely looks at campus incidents pertaining to freedom of speech and ranks colleges by how freely their students and faculty are allowed to express their opinions.

According to FIRE, some of the most egregious reasons these institutions landed on the list included Mount St. Mary’s University “fir[ing] two faculty members for criticizing the university president’s plan to oust low-performing freshmen, [Colorado College suspending] a student for making a six-word joke on social media, and [The University of Tulsa] even punish[ing] a student for something someone else said—and then went after the student newspaper for reporting on the story.”

Marquette University made the list this year for attempting to strip tenure from Prof. John McAdams over his writing on his blog, the Marquette Warrior. Marquette previously made FIRE’s worst of the worst list in 2015 for the same issue.