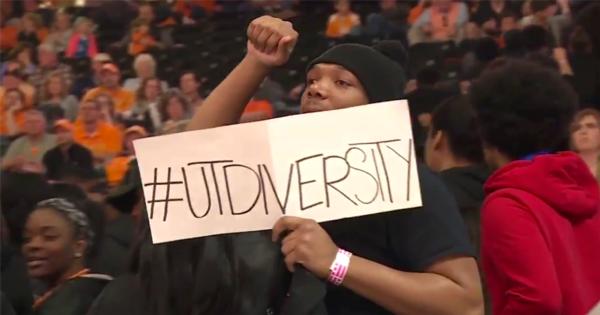 Students at the University of Tennessee (UT) interrupted a basketball game Saturday to protest a state budget bill that would cut funding for the school’s diversity office by $8 million.

“Who are we? Vol nation. What do we want? Diversification,” student protesters with a group known as “ UT Diversity Matters” chanted during the game before staging a walkout that left a majority of the student section empty.

The nearly 150 students continued their protest outside the stadium where they surrounded Tennessee Rep. John Duncan’s car as he attempted to leave the game. Duncan is not a member of the Senate Education Committee (SEC), the committee that passed an amendment to Senate Bill 2516 defunding the school’s diversity office, nor does he appear to be co-sponsoring any house bills in favor of the amendment, making it unclear why students elected to target his car specifically.

Nonetheless, Duncan fell victim to student protesters who promised to hold him accountable for his vote on the house floor.

“Thank you for joining us today. We will hold you accountable for the decisions you make on the house floor,” protesters shouted at Duncan while he waved from his car.

Last week, the committee unanimously approved of a budget amendment to Senate Bill 2516 that would reallocate $8 million in funds from the school’s diversity office to its rural outreach programs. In addition, the amendment would strip all state funding from the diversity office forcing it to get its fund strictly from the federal level.

“During the discussion of the amendment, the word ‘diversity’ was not mentioned a single time, nor was any indication given of where the money would be diverted from. Indeed, it is unclear where all of this money would come from, since $8 million is significantly more than UT Knoxville’s $5.8 million budget for the Office of Diversity and Inclusion,” the group said in its statement.

The Board of Trustees will have until April to make a decision on the amendment when the legislature finalizes the state budget.

UT Diversity Matters held another demonstration last week during which members encouraged faculty and students to sign a banner in support of funding for the diversity office. The group plans to bus students from UT to the capitol next week to present the banner to state legislators as part of an annual “Advancing Equality Day on the Hill.”

The group is also circulating a petition in protest of the new amendment, arguing that there is “no compelling governmental interest for state interference with the current distribution of state appropriations to diversity and inclusion initiatives at the University of Tennessee, Knoxville.”

“I believe that all students, regardless of background, should benefit from present funding allocated to support diversity and inclusion initiatives that contribute to the intellectual and personal development of students,” it continues.

President Joe DiPietro and Chancellor Jimmy Cheek stepped up to defend funding for the school’s diversity office, but the administrators have a rocky history with the state’s tenacious legislature. Last December, lawmakers called UT’s diversity office a “national embarrassment” after it released of inclusive holiday guidelines.

[RELATED: Lawmakers: U. of Tenn. diversity office a ‘national embarrassment’]

In a joint letter sent to all students and faculty last week, Cheek and DiPietro called the amendment “clear and concerning.”

“While the amendment was unexpected and is disappointing, several additional steps remain in the process toward passage of the state appropriations bill by the General Assembly,” they wrote in their letter. “We are in contact with legislators and will continue to vigorously seek to resolve issues so that reinstatement of the funding as originally proposed by the governor occurs before the legislature approves the final state budget in April.”