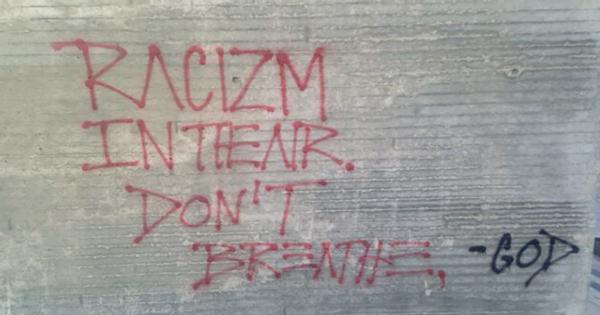 Professors at the University of Wisconsin, Madison condemned the recent arrest of a convicted serial vandal as the result of an “over-policed” campus, saying administrators ought to “limit the circumstances under which officers may enter the classroom.”

“The classroom arrest of an African American student for allegedly vandalizing university buildings with anti-racist graffiti, in an Afro-American Studies class led by a faculty member of color, contributes to an oppressive and threatening environment for those members of our community who are routinely over-policed on the grounds of skin color,” an open letter from the UW English department states. 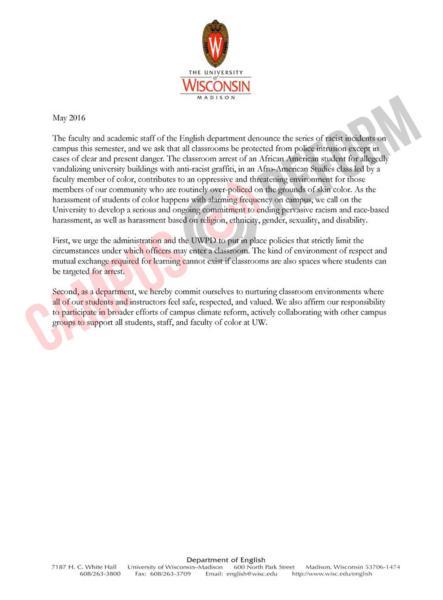 The letter comes in the wake of the recent arrest of a UW student, Denzel McDonald, who was taken into custody on suspicion of vandalizing 11 buildings on campus, costing the university over $4,000 in repairs. He was not, however, arrested inside of a classroom as the UW professors insist.

A police report explains that public safety had spent weeks trying to contact McDonald, but all phone calls and even several home visits went unanswered. Consequently, police were forced to locate McDonald in a classroom, later apprehending him outside of the building to minimize the spectacle.

Eventually, a county prosecutor dropped the charges against McDonald, saying that when he and “a deputy met with McDonald and his attorney, it was clear he understood the seriousness of his behavior,” implying that McDonald had in fact taken responsibility for the charges.

[RELATED: Prosecutor says dropped vandalism charges has nothing to do with student protests]

Now, however, UW faculty continue to say McDonald was only “allegedly” involved in the vandalism despite his admission. Additionally, McDonald plead guilty to a separate vandalism charge over a year ago.

“Fuck the police,” “Death to the pigz,” and “The devil iz a white man,” were among the slogans McDonald spray-painted on his campus, which the faculty letter describes as “anti-racist graffiti.”

The professors then conclude their letter by demanding that strict limitations be placed on police officers, particularly in regards to their ability to arrest students on campus.

“We urge the administration and the UWPD to put in place policies that strictly limit the circumstances under which officers may enter a classroom. The kind of environment of respect and mutual exchange required for learning cannot exist if classrooms are also spaces where students can be targeted for arrest,” the letter continues.

Finally, the professors criticize the police officers for violating McDonald’s right to “feel safe” in the classroom.

“As a department, we hereby commit ourselves to nurturing classroom environments where all of our students and instructors feel safe, respected, and valued,” the letter states. “We also affirm our responsibility to participate in broader efforts of campus climate reform, actively collaborating with other campus groups to support all students, staff, and faculty of color at UW.”