Augustana cracks down on speech after 'threatening' Trump chalkings 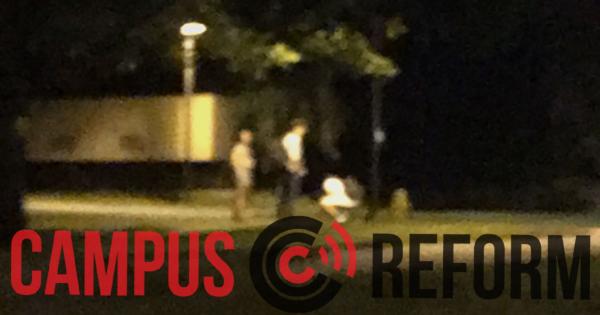 Augustana College has created a “free expression zone” on its campus in response to a string of pro-Trump chalkings, even though the school’s own policies prohibit such limitations.

Earlier this week, the school’s College Republican chapter wrote several messages endorsing Republican presidential candidate Donald Trump on their campus—slogans such as “Trump 2016,” “Legal Immigrants 4 Trump,” and even the popular Milo Yiannopoulos tagline “feminism is cancer”—but some short hours later the chalkings had been vandalized and washed away.

“What is free speech to one group is offensive and threatening to others.”

In one instance, one of the chalkings was replaced with “Trump can suck my...” (the predictable remainder was tastefully excluded from the photo), and in another case one of the CR members reported to Campus Reform that he was harassed by a female peer who ripped a stick of chalk out of his hands before running away yelling “this is capitalism.” 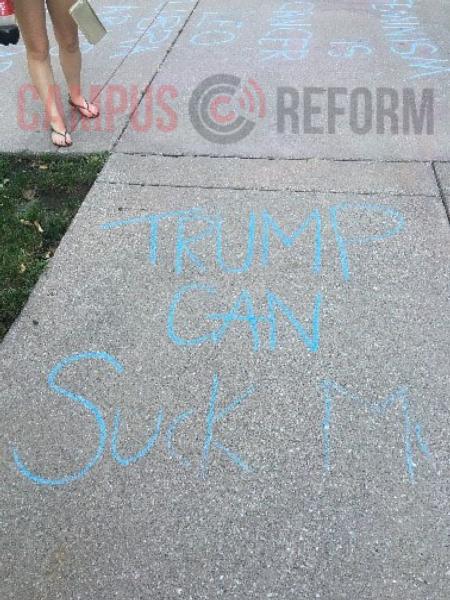 The CRs claim that the incident was reported to the school, but no response has been issued, despite photographic evidence of students actively vandalizing the display. 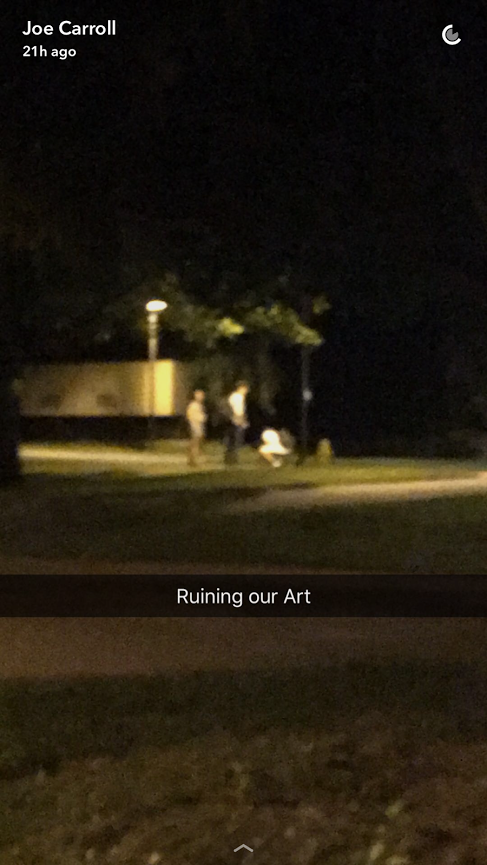 Augustana’s provost did issue a statement on the matter, but rather than condemning the vandals, chose to focus her ire on the “offensive and threatening” CRs chalkings.

“Some of the political statements threaten and disrespect members of our community,” Provost Pareena Lawrence wrote in an email obtained by Campus Reform. “What is free speech to one group is offensive and threatening to others.” 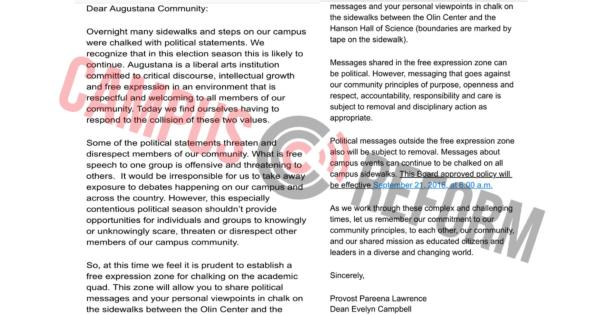 As a result, Lawrence deemed it necessary to limit all “political messages” to a designated “free expression zone,” which is apparently a small stretch of sidewalk marked off by blue tape. 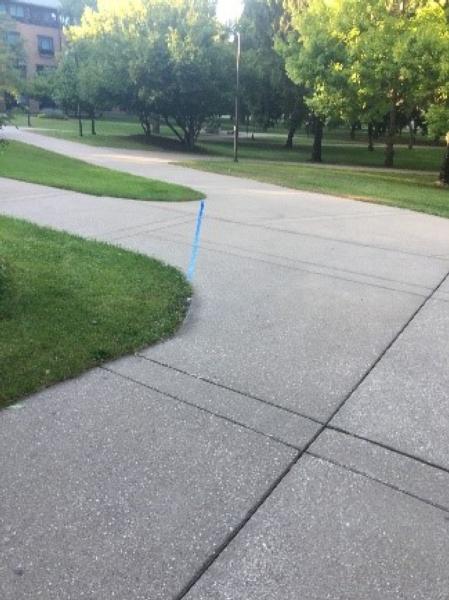 “At this time we feel it is prudent to establish a free expression zone for chalking on the academic quad,” she explained, noting that while messages shared in the designated free speech zone “can be political,” all other areas are off-limits under the new policy—violation of which could result in “disciplinary action as necessary.”

Notably, Augustana’s own social conduct policy explicitly states that “exposure to challenging ideas is a necessary component of a liberal arts education,” and that the administration will not “intervene to regulate the content of protests and demonstrations.”

“It is normal that the ideas of different members of the college community will sometimes conflict and we do not attempt to shield people from ideas that they may find disagreeable or even offensive,” it adds, yet the school’s own provost expressly stated that the new free speech zone was created as a result of the “offensive and threatening” nature of the pro-Trump chalkings.

Augustana CR president Joe Carroll reported being astounded by the incident and its corresponding backlash, complaining that under the new policy “anything can be considered offensive” and arguing that “the school has created a grey area where there is no clear policy on what we are allowed to say.”

“I think the school wants to protect free speech, but is afraid of liberal backlash,” Carroll told Campus Reform. “The school continues to say that it is for free speech but it has clearly put limits on it. As a College Republican, my biggest concern is not knowing what I am and am not aloud to say. This is a twisted form of censorship.”

CR Vice President Brian Guerrero agreed with Carroll’s assessment, telling Campus Reform that his First Amendment rights were clearly violated before going on to ridicule Augustana for choosing people’s feelings over the right to free expression.

“Today, any college or university must choose one or the other. This time Augustana chose to protect the feelings of the Augustana community,” he remarked. “To go on to say that our chalkings were threatening is ridiculous.”

When asked to comment on the incident, Augustana’s public relations director, Sam Schlouch, simply confirmed that the school had “established a free expression zone,” but denied having any knowledge of a harassment report filed by the CR’s in relation to the vandalism of their chalkings.