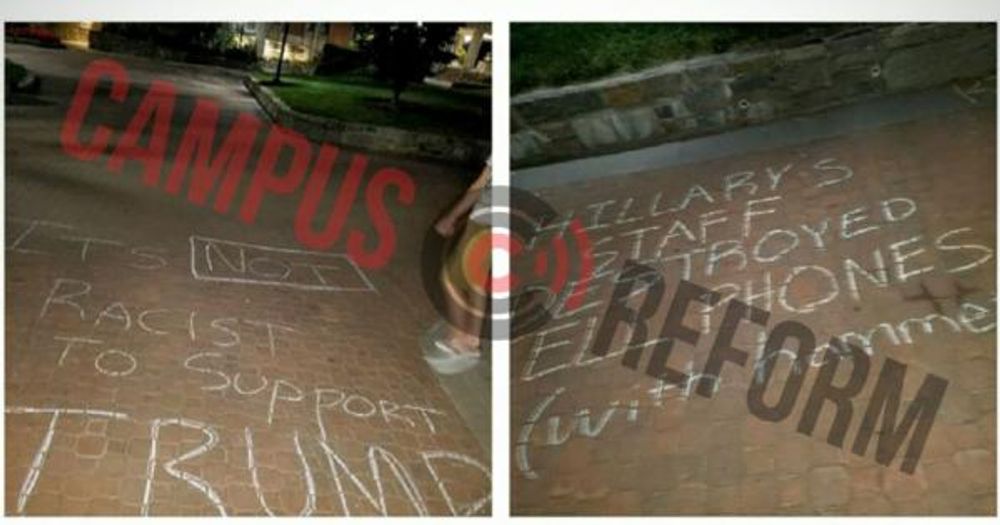 Appalachian State University is contending that its desire to minimize controversy over pro-Trump chalkings on campus takes precedence over state and federal laws protecting free speech at public institutions.

Over the course of the past several months, App State’s campus has been covered in a variety of political messages, some innocuous and others offensive, but now the school is severely cracking down on student chalkers after matters apparently came to a head.

In fact, the situation seems to have spiraled so out of control that both the university’s Board of Regents as well as its Faculty Senate called emergency meetings to pass resolutions on the issue.

“While rights of members of the university community and all citizens to assemble and engage in expressive activities are guaranteed by the United States Constitution and the North Carolina Constitution, those rights are not absolute and may be subject to reasonable time, place, and manner restrictions imposed by the university to protect public safety and university property,” the Board states in its resolution.

Likewise, Chancellor Sheri Everts made a similar assertion in a statement sent to all students and faculty Wednesday, in which she indicates her position that the public university is only obliged to recognize legal speech protections to the extent that they are consistent with the university’s purpose.

“It is important to note that free speech is encouraged on our campus,” she remarks, “but not all speech that may be considered protected under state or federal law is consistent with the university’s values and mission.”

“University administrators can support free speech while also taking a stand against content that is in opposition to Appalachian’s values and missions,” Everts goes on to contend. “This policy change reflects our desire to do both.”

Under the updated chalking policy, only recognized student organizations and university Departments are allowed to chalk on the grounds (but not the vertical surfaces) of App State’s campus, and each chalking must be signed by the group responsible for it.

Moreover, only water-soluble chalk may be used, the messages must be exposed to the rain, and chalkers may not use products like hairspray to artificially extend the longevity of their work.

[RELATED: Privilege board gets prominent placement at App State]

In her statement on the policy, Chancellor Everts praises the Board of Regents’ resolution as “a strong signal from our top leadership that Appalachian values diversity of thought, belief, and community,” then proceeds to note that anyone who violates the updated chalking statutes will be “referred to the Office of Student Conduct.”

Campus Reform reached out to the school for a comment on its reasoning behind the policy, but did not receive a response in time for publication.