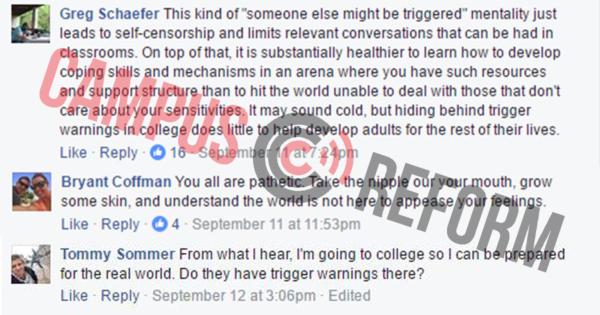 In a video posted to the AUSG Facebook page, SGA President Devontae Torriente kicks off a campaign called “Let Us Learn,” which advocates for the mandatory use of trigger warnings “in order to make our academic spaces available to all students.”

“Avoiding certain discussions is not the way to solve problems or promote engagement, dialog, and deliberation.”

The Faculty Senate originally passed the resolution against trigger warnings last September, but sent an email to students last month reminding them of the body’s position in response to the controversy triggered by the University of Chicago’s similar repudiation of safe spaces and trigger warnings.

“The fact of the matter is trigger warnings are necessary in order to make our academic spaces accessible to all students, especially those who have experienced trauma,” Torriente argues in the video. “Without trigger warnings, students who have endured trauma, such as interpersonal violence, or experienced post traumatic stress disorder, can be excluded from the classroom, negatively impacting their mental health and education.”

Most of the comments on the AUSG Facebook page, however, slammed the video, pointing out that trigger warnings and other such concepts do nothing to prepare students for the real world.

Alexis Arnell, SGA Senator for the Campus at Large, told Campus Reform that she was the sole member of AU’s SGA who personally opposed the idea of mandatory trigger warnings.

“I don’t think there’s anyone, to be completely honest with you, in our SG that doesn’t agree with the trigger warning mandate,” Arnell asserted, though she also said the lack of ideological diversity on the board didn’t particularly surprise her.

“It’s just so hard on our campus—there’s definitely conservatives that also agree with me and think that our voices aren’t being heard in SGA,” she explained.

Faculty Senate Chairman Todd Eisenstadt also defended the resolution, pointing out that it still allows for trigger warnings to be used in class at an individual faculty member’s discretion, and merely disavows mandating their use by all professors.

“If we mandate trigger warnings, faculty will be subjected to the whims of students, a small minority of whom may begin to seek them for any range of issues,” Eisenstadt told Campus Reform. “Avoiding certain discussions is not the way to solve problems or promote engagement, dialog, and deliberation.”

Eisenstadt further argued that the Faculty Senate is better serving students’ futures by exposing them to potentially fraught topics.

“The world has a lot of triggers, there will be few warnings of these after students graduate, and we the faculty want students to be trained as citizens to grapple with potent, emotion-inducing issues to the best of their abilities,” he said. “If we train them to that, we will be better serving them and their future.”