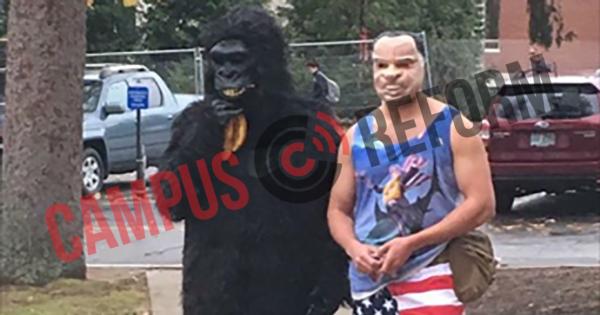 Professors at the University of New Hampshire are calling for the expulsion of two students who counter protested an anti-Trump rally while wearing Harambe and Richard Nixon costumes.

“Time to call for an investigation leading to the expulsion of these students.”

A former UNH professor, Courtney Marshall, posted a photo of the students on her Facebook, writing, “There was a walkout yesterday at my former institution (UNH), and these two people showed up.”

The post led several current professors to call for the expulsion of the students, even writing sample letters to administrators in the comments.

“Time to call for an investigation leading to the expulsion of these students,” said Robin Hackett, an associate professor of English as well as a faculty member of the Women’s Studies Program, before listing the names of several administrators for professors to direct their complaints.

“Somebody knows who these two students are, who dressed as Nixon and Harambe,” Senier asserted. “And whatever their intent, it seems that a conversation with them is in order.”

English lecturer Molly Campbell decried the use of the American flag during the counter protest, whining that “there was a huge truck waving American and trump flags driving back and forth blaring it's horn. Nixon was throwing pacifiers at the crowd.”

Larry Beemer, another English lecturer, said his “10 year old son” had to explain to him that the Harambe and Nixon costumes were meant to represent the popular meme “Dicks out for Harambe.”

“Are they assholes? Definitely; are they Racist agitators? Yes, but probably only because of personal ignorance, which isn't an excuse,” Beemer asserted.

When asked about the professors’ posts, university spokesperson Erika Mantz told Campus Reform that “Every member of the University of New Hampshire community has the right to hold, defend, and promote their personal opinions.”

At least two of the professors who called for disciplinary action against the counter-protesters are members of the Women’s Studies Program, which sanctioned the anti-Trump rally on its official Facebook page, flouting tax rules that prevent universities from engaging in partisan political activity.

“WS wants to make sure you know about this march that is happening tomorrow,” WSP wrote, sharing the “Our Power Walk Out and March.”

The march, organized by the UNH College Democrats, specifically brands itself as an anti-Trump event in the description.

“This is to show our solidarity with all people who are at risk of getting their rights taken away by a Trump presidency, and to ensure that it is known that Trump's hateful rhetoric does not represent our generation and we will not allow any anti-climate, racist, sexist, or xenophobic policies to win through,” the description states.

WSP even provided students with materials for the event, encouraging protesters to come by to “make your own poster.”

N.H. Rev. Stat. § 15:5 states that "...no recipient of a grant or appropriation of state funds may use the state funds to... participate in political activity, or contribute funds to any entity engaged in these activities."

Erika Mantz told Campus Reform the university is “troubled” by the posts, although they have not yet been removed from the page.

“UNH is troubled by the partisan nature of some social media posts by the Women’s Studies Department. UNH encourages its students, faculty, and staff to be engaged citizens but as a university we do not advocate for particular candidates or political parties,” Mantz commented. “The university is working with the department to review the posts. UNH is aware of state law around political activity. “

However, the Women’s Studies Program has involved itself in political activity several times prior in now-deleted Facebook posts, including inviting students to an event with Feminist Majority, a nonprofit that “works to elect pro-choice feminist candidates,” and posting links to events on Hillary Clinton’s website.

New Hampshire State Representative Yvonne Dean-Bailey criticized UNH in a statement to Campus Reform for allowing school resources to be used to “promote the liberal agenda” and said the school must remain focused on providing a “quality education” to students.

“UNH must work to return their focus to providing quality and affordable education, rather than using valuable school resources to promote the liberal agenda,” Dean-Bailey declared. “While students struggle to afford a quality education, school resources continue to be severely mismanaged. I'm hopeful UNH will work to restore their priorities of providing exceptional and inclusive education for all students and that starts by ending divisive and non-inclusive campaigning with university resources.”