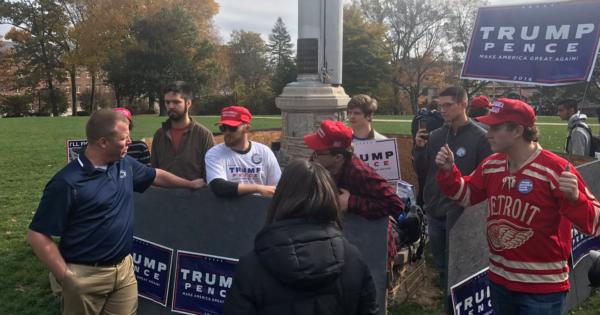 Two Pennsylvania State University students are raising money to pay a fine they received after ripping up campaign signs at a recent Donald Trump rally on campus.

Last month the school’s “Bull Moose Party,” a pro-Trump student group, held a demonstration on campus during which members built a mock wall around a flagpole, decorating the display with Trump/Pence campaign signs.

“Another student and I ripped up a couple of the Trump signs that bordered their wall.”

Before long, counter-protesters arrived and began tearing down the signs and ripping them to pieces while calling Trump “a rapist” and a homophobe, as documented in video footage obtained by Campus Reform.

Administrators chastised both sides in response to the altercation, asserting that the Trump supporters violated school policy by erecting a structure on university property, but that this did not justify the destruction of their property by the counter-protesters, who also violated a policy against using "amplified audio devices," specifically a megaphone.

Two of the vandals, Hanna DeMarte and Trystn Murphy, have now created a fundraising page to raise money to pay off a fine related to the incident, claiming that they “both received notice in the mail that we’re being fined $362 each for criminal mischief,” and that “failure to respond to this charge in a timely manner will result in our arrest.”

“Another student and I ripped up a couple of the Trump signs that bordered their wall,” DeMarte confesses, complaining that “a video of this, originally posted by the Trump club's Facebook page, circulated on social media and was picked up by some alt-right news networks.”

Although the combined amount of both fines adds up to $724, the students are asking for $1,450 “because we want to donate the monetary sum of the charges to Planned Parenthood in the name of the student who reported us to the police (Dmitri A. Loutsik).”

“We had the very successful Trump Wall event, which I attended and supplied the Trump signs for,” Loutsik told Campus Reform. “I unfortunately had a class that day where attendance is mandatory and close to 25 percent of my grade, so while I was in class the majority of my signs got ripped up by two of the counter-demonstrators.”

“Fortunately we got it on video, so I and some eye-witnesses went to the university police and reported it,” Loutsik explained. “Then fast forward a couple of weeks, and I get my friend texting me telling me that the two people I reported got fined, and are asking people to donate money to Planned Parenthood in my name.”

Loutsik also told Campus Reform that he is unsure of the purpose behind donating to Planned Parenthood, given that abortion was not a focus of the demonstration, but speculated that DeMarte and Murphy simply chose a politically polarizing organization as a way of rebuking his party affiliation.

“I honestly think they just imagine me as some sort of strawman Republican who is the epitome of every stereotype they have,” he remarked. “I’ve never spoken publicly about the issue of abortion.”

As this article went to press, the students had raised $364, roughly 25 percent of their goal, from 21 different donors.