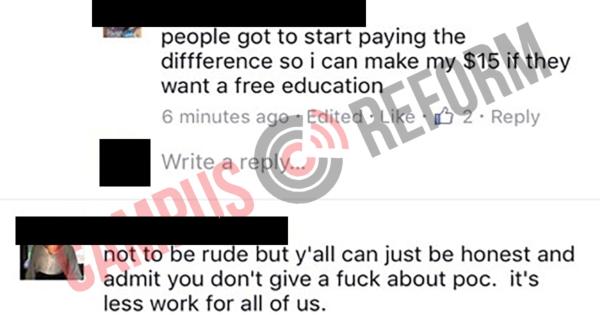 A student has withdrawn from Bryn Mawr College after being harassed by classmates for openly supporting President-elect Donald Trump.

Andi Moritz, a freshman, claimed that the harassment began after she posted in a school ride-sharing Facebook page asking for another student to join her to canvass for Donald Trump.

“The counselor defended the people who were saying horrible things to me, and asked me to point out the victim.”

“I signed up to campaign for Trump so I could have some political experience,”Moritz told Campus Reform. “My ride was with a guy I didn’t know, so I asked if someone wanted to go with me so I wasn’t alone with him.” 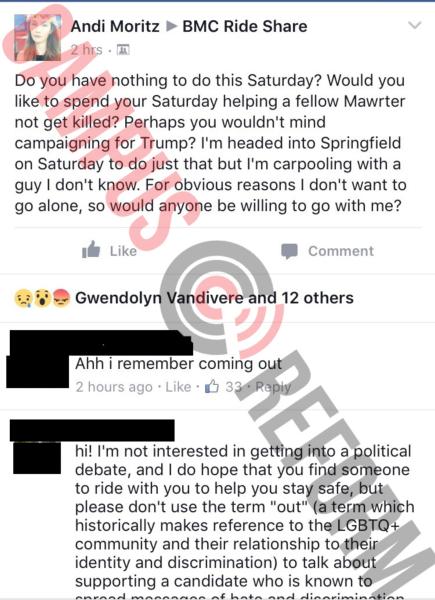 Following her post to the Facebook page, Moritz began receiving messages from students upset over her political views, and in particular with one portion of the post in which she invited classmates to message her privately in case they were not comfortable being “out” as Trump supporters.

“Nobody has the right to an opinion of bigotry,” one person commented. “0 tolerance for fascists!”

[RELATED: Babson finds no evidence of slurs by Trump supporters]

“Is this a joke?” another wrote. “You want to go campaign for a man who has systematically oppressed entire ethnic/racial groups not to mention the LGBTQIA+ community and many others and you’re worried about makeup? Excuse me?” 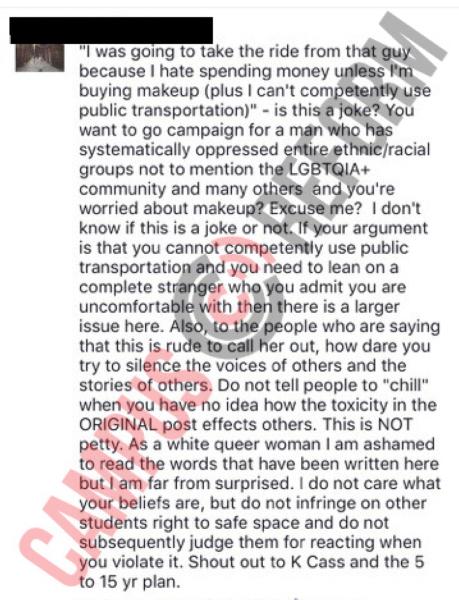 “Not to be rude,” one commenter wrote, “but y’all can just be honest and admit you don’t give a fuck about poc. It’s less work for all of us.”

“After I posted [the original message],” Moritz said, “I went to a cycling class and when I returned I saw that people were upset because in the message I said, “If you’re not comfortable about being ‘out’ about not hating Trump feel free to message me privately.”

“They were mad about that phrase” she explains, because it’s usually used in references to members of the LGBT community. “I apologized, and deleted that part because I wasn't there to make people upset.”

The messages continued nonetheless, both publicly on the Facebook page and to Moritz privately.

One student even implied violence, saying, “And I promise, if I ever hear some slick shit like that from any of y’all white people on this campus, you will get your shit rocked,” and adding, “Say your ignorant shit where nobody can hear it, or I will personally confront you and I will never be scared to do that. You better be ready to catch these black ass hands.” 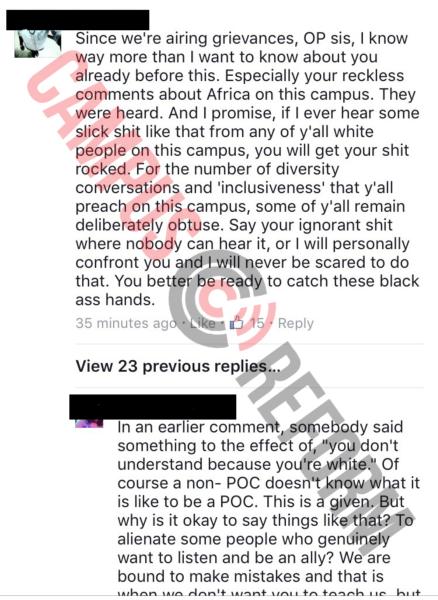 Moritz believes that the school did not do enough to support her, recounting that she even took flak from the counselor she turned to for support.

“My peer mentor, paid by the school, confronted me about it,” Moritz said. “She did not scream at me and didn't attack me, but she wasn't very supportive of me and I didn't want to talk to her at the time.”

“‘You need to understand you make people feel attacked,’” Moritz recalled being told, “and [she was] telling me how I have hurt people. At one point she suggested that I don't understand how politics work, because she was a politics major so she knows how politics work.”

That evening, Moritz called a campus suicide hotline, though she told Campus Reform she was not feeling suicidal.

“I was very sad and not mentally in a good place,” she said, “but I wasn't contemplating suicide. I just really wanted someone to talk to.”

The next day, she visited the campus counseling center.

“The counselor defended the people who were saying horrible things to me, and asked me to point out the victim in the situation,” Moritz said. “‘Well who do you think the victim is?’ she asked. I don’t like pointing fingers and pointing victims. I just felt like she wasn’t doing anything to help me.”

Following this incident, Moritz met with her dean to discuss what had happened. “I suggested some sort of open conversation so people could share their thoughts,” Moritz recalled. “She seemed open, but it never happened.”

Moritz withdrew from the school shortly after this meeting because the harassment was unbearable, explaining, “I did not feel welcome at the college. It was beneficial to withdraw as soon as possible so I could get the most of my money refunded.”

According to The Philadelphia Inquirer, the school released a statement suggesting exasperation with the whole situation.

“Freedom of speech and expression can lead to hated debate on campuses, and the Bryn Mawr campus has not been immune from the polarization of views that characterized the campaign,” the statement declared. “Ad hominem attacks have no place in these discussions and do nothing to help us learn from or better understand one another. We continue to strive to be a place that both affirms free speech and promotes civil discourse.”

“People are calling me a special snowflake now,” Moritz said indignantly. “This college did not support me. Why would I pay outrageous tuition price to be somewhere I am not wanted and where I am not having a good time at all?”

“While it’s no surprise that college students were unjustifiably ostracized on campuses across Pennsylvania for supporting Trump, Andi Moritz’s story is particularly appalling,” Zachary Bartman, the Chair of the Pennsylvania College Republicans, told Campus Reform.

“It is reprehensible that she would be bullied to the point of consulting the suicidal hotline for simply espousing her political views. Furthermore, is it despicable that the school administrator and guidance counselor would discriminate and not fulfill their ethical duties to help Ms. Moritz. Intellectual diversity is consummate with the college experience,” he continued. “Apparently, at Bryn Mawr, the College is more concerned with pushing the leftist agenda than the welfare for their students.”

“Withdrawing from college does not mean your life is over,” Moritz concluded optimistically. “I’m happy right now actually. I want people to know that I don’t want this negatively to continue from either side. I don’t want people attacking each other or acting cruel or ignorant.”