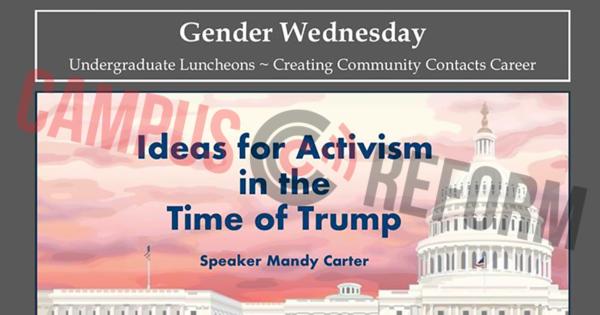 As part of its “Gender Wednesday” programming, the university’s Department of Gender, Sexuality, and Feminist Studies is planning to host an event on February 15 called “Ideas for Activism in the Time of Trump,” featuring social, racial, and LGBTQ justice activist Mandy Carter.

The event “brings together social justice people to take a stand against the Trump Administration.”

According to the event description, its purpose is to cultivate an “understanding [of] the importance of the changing of hearts and minds and the changing of public policy in social justice movements,” as well as to demonstrate that “our North Carolina Moral Monday Movement can be a model of a diverse coalition that brings together social justice people to take a stand against the Trump Administration.”

The Facebook page created for the event also lists resources for attendees, including an invitation to the Annual Moral March in Raleigh, a New York Times article on feminism, a Rachel Maddow-approved online strategy guide, and a Practical Guide for Resisting the Trump Agenda.

The anti-Trump handbook, available in multiple languages, includes a group leader toolkit and advice for contacting Members of Congress, explicitly modeling its approach on the success of the Tea Party movement.

Although there are many students attending the activism training, some people have taken to the comments section of the event page to register their disapproval.

Calling the event “a public outrage,” one individual asserted that “I will be pulling my donations from Duke University,” while another declared that, “Because of this we are removing Duke University from our recruitment campaign.”

No one from the Trinity College of Arts & Sciences had responded to requests for comment from Campus Reform by press time.

Sydney Hutchison is a Louisiana Campus Correspondent, and report liberal bias and abuse for Campus Reform. She is a sophomore at Louisiana State University, where she studies Political Science and Business Administration. She is the founder of the first Network of Enlightened Women chapter in Louisiana and contributes to Future Female Leaders.