Peter Van Voorhis Contributor at The Washington Examiner @RepublicanPeter on Mar 24, 2017 at 10:11 AM EDT 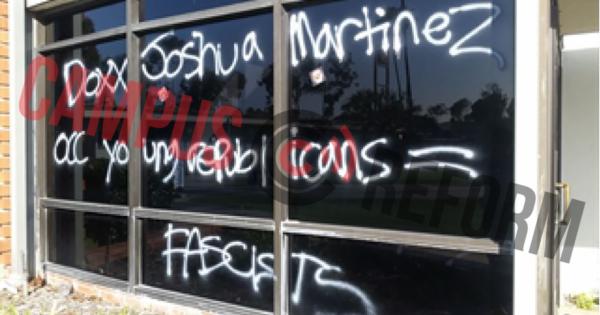 A conservative student at Orange Coast College has filed a civil rights violation report after a knife was found lying near hateful graffiti messages targeting him by name.

Joshua Recalde-Martinez, the chairman emeritus of the OCC College Republicans, became a somewhat polarizing figure on campus as a vocal defender of Caleb O’Neil, the conservative student who was briefly suspended for recording one of his professors calling Donald Trump’s election an “act of terrorism.”

“This is not merely a prank. This is real life terrorism.”

Recalde-Martinez told Campus Reform that he received a phone call from an OCC administrator on March 13 informing him that “graffiti and stickers were discovered on multiple buildings on campus,” some of which specifically singled him out, saying “doxx Joshua Martinez” and “fuck Joshua Martinez.” 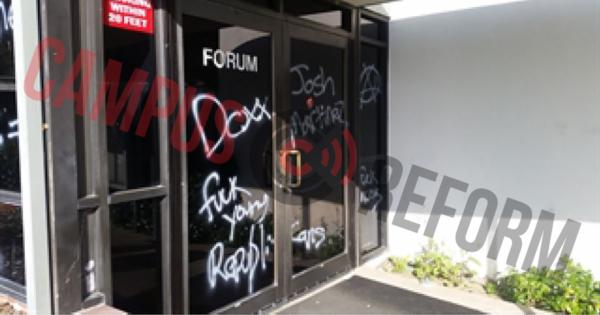 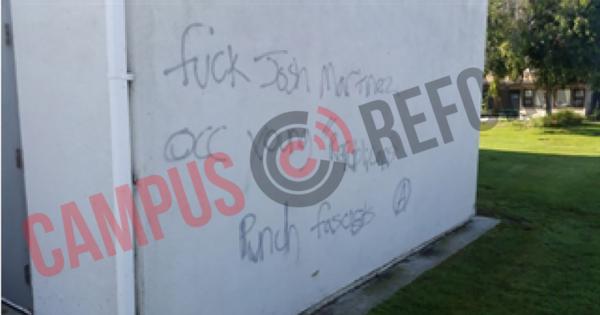 Recalde-Martinez noted in a Facebook post that the perpetrators “left a kershaw knife” near one the graffiti messages, but said he was most disturbed by their inability to correctly identify his group as the OCC College Republicans. 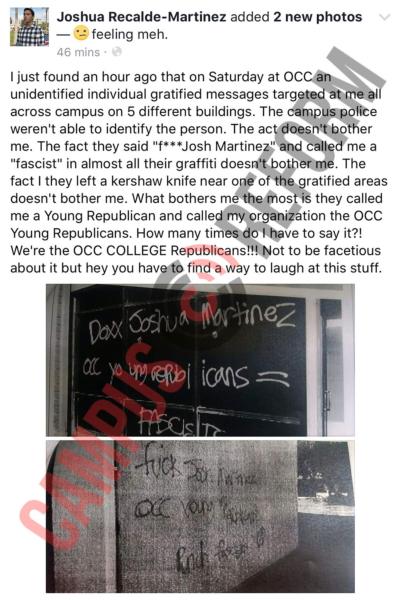 Orange Coast College Public Safety conducted an investigation after being alerted to one of the graffiti messages by an administrator, who also found the knife in close proximity to the scene, according to a police report obtained by Campus Reform.

After discovering several more instances of the vandalism, officers reviewed surveillance footage showing the damage being caused by a “thin” individual carrying a skateboard and wearing a black hoodie, black pants, and a hat, but were unable to identify the perpetrator.

The investigation has since been closed.

“I am afraid that OCC sought to hide the incident, due to the recent incident I was involved in at the college involving exposing a professor who went on a rant in class and protecting the student who filmed it,” Recalde-Martinez told Campus Reform. “I don’t feel safe on campus, and don’t feel my family members are safe on campus either.”

Recalde-Martinez contrasted this incident with one that occurred just a few days earlier on the same campus, in which student who drew swastikas and wrote threatening messages on two vehicles were immediately arrested and charged with a hate crime, despite the fact that it occurred at 1:30 in the morning.

Once the culprit was apprehended, OCC President Dennis Harkins released an email denouncing the hate crime and offering assurance that the school had obtained a restraining order against the individual. 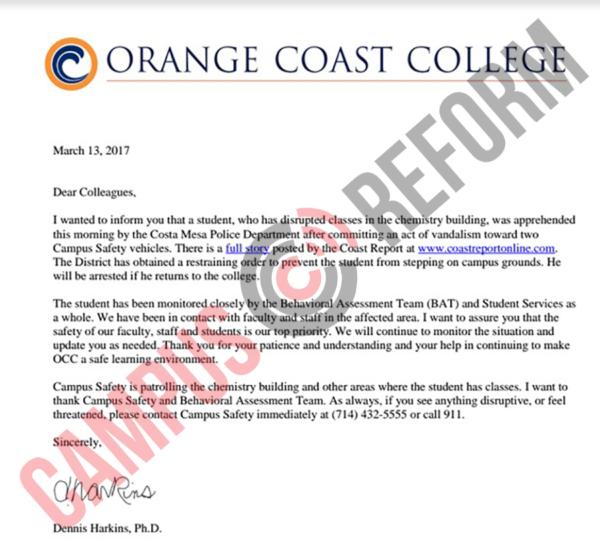 Recalde-Martinez said he has received no such support from the administration, despite the fact that according to state law, “an intimidation by threat of violence...because of political affiliation” is defined as a civil rights violation.

“I am personally appalled by the fact my case was never reported as a hate crime, even though in the state of California it is one by law,” Recalde-Martinez continued. “I wasn’t notified that the incident occurred until the case was already closed, and am also shocked [that] all evidence of the incident was destroyed by campus employees before the incident was reported to the Costa Mesa Police Department.”

“Due to the mismanagement of the case, the perpetrator remains at large and the ability of the police to catch them is diminished by the destruction of the evidence, which may have yielded things such as fingerprints,” Recalde-Martinez concluded. “By these actions Orange Coast College continues to show they are unwilling to stand up for all students and protect them, especially if they are conservative.”

OCC Director of Marketing and Public Relations Juan Gutierrez, however, told Campus Reform that the school’s internal report on the matter does not provide the full story, explaining that the matter is now in the hands of local police.

“The case is not closed. It has been turned over to the Costa Mesa Police Department,” he asserted, elaborating that OCC did not report the incident as a hate crime because “the Costa Mesa Police and/or the Orange County District Attorney determines what is a civil rights violation.”

Gutierrez also defended the school’s response with respect to both removing the graffiti and listing OCC as the official victim.

“Our policy is to document, take photos, and remove graffiti as soon as possible so that it does not inspire other[s] to do the same,” he stated. “It is our interpretation that this was a property crime since Orange Coast College buildings on campus were vandalized by the graffiti. It is up to the Costa Mesa PD and the OC DA to determine additional charges.”

“The Left’s embrace of ‘hate crimes’ often promotes false reports…[and] the real victims of the political season are overwhelmingly conservatives,” he told Campus Reform. “The latest target is Joshua Recalde-Martinez, whose name was spray-painted at his college some 5 times with death threats.

“This is not merely a prank,” Steel concluded gravely. “This is real life terrorism.”