Amber Athey White House Correspondent at The Daily Caller @amber_athey on Apr 11, 2017 at 7:38 AM EDT 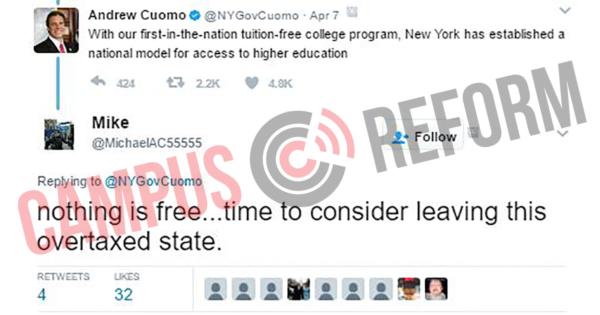 The plan was first introduced by Democratic Governor Andrew Cuomo in January and made its way into the state budget last week, passing the Assembly on Saturday and the Senate late Sunday night, CNN Money reports.

“Nothing is free...time to consider leaving this overtaxed state.”

[RELATED: Cuomo and Sanders team up to announce free-college proposal]

[RELATED: REPORT: ‘Free’ community college would cost NYC up to $232 million per year]

The free tuition comes with some important stipulations: students must be enrolled full-time, and graduates must live and work in New York for the same number of years they received the scholarship. If the graduate leaves the state early, the funding is converted into a loan.

Governor Cuomo’s office estimated that the program would cost $163 million in its first year, in addition to the $1 billion that the state already spends on need-based scholarships.

Cuomo touted the plan on Twitter, crowing that “Our plan for free college tuition for families under $125K shows the difference that responsible government makes.”

Hillary Clinton, who previously served as a U.S. Senator from New York, called the passage of the plan a “great step for progressives” in a tweet of her own.

“Let's celebrate New York State getting something important done that we wanted to do nationally,” Clinton declared. “A great step for progressives.”

However, a number of responses were more critical of the plan, including those suspicious of the $125,000 income cap and others questioning the use of the word “free.” 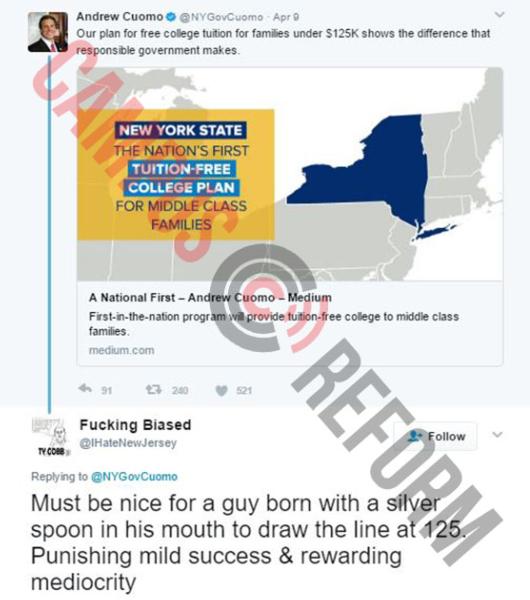 “Must be nice for a guy born with a silver spoon in his mouth to draw the line at 125,” one twitter user said. “Punishing mild success & rewarding mediocrity.”

“nothing is free...time to consider leaving this overtaxed state,” another complained.