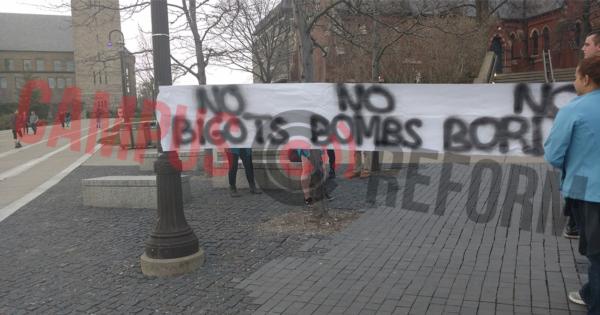 A liberal extremist group known as “Refuse Fascism” is touring college campuses, most recently stopping at Cornell University to recruit students in the fight against the Trump administration.

The group, which calls the “Trump/Pence regime” a “catastrophic danger to all of humanity,” organized a demonstration on Cornell’s campus Tuesday to “drive out the Trump and Pence fascist regime.”

“Even as the Trump/Pence regime is moving fast, they have not fully consolidated their regime.”

“We are spreading the message all around the country, all around the world, that no, in the name of humanity, we refuse to accept a fascist America and drive out the Trump/Pence regime,” one protester declared in video footage of the protest obtained by Campus Reform.

She went on to tell the crowd that there are “a lot of ways for students like you to get involved,” explaining that the whole purpose of her organization’s efforts is “to get students organized.”

“We are on our second tour right now going to campuses all around the northeast where there are a lot of students who hate all the shit that’s going on, everything this whole fascist regime is doing,” she said, clarifying that she was referring to “these attacks on women, on Muslims, on Mexicans, LGBT people, immigrants, refugees, the climate, science, and truth itself.”

“Students need to rise to this challenge now. We cannot wait four years. We cannot sit back while millions of people will die at the hands of this regime,” she concluded, enlisting students to join her organization at the upcoming March for Science and The People’s Climate March in Washington D.C., noting that there are organizers in the area offering buses to help students attend.

The organization distributed ominous flyers at its Cornell protest likening the Trump administration to Nazi Germany, saying “there is [a] method to Trump’s madness that echoes Hitler.”

One flyer, for instance, claims that “every [C]abinet post, every executive order, [and] every tweet” made by the Trump administration “is a link in the chain of a fascist government and worldview under the signboard of a vengeful ‘America First’ being rammed into place.” 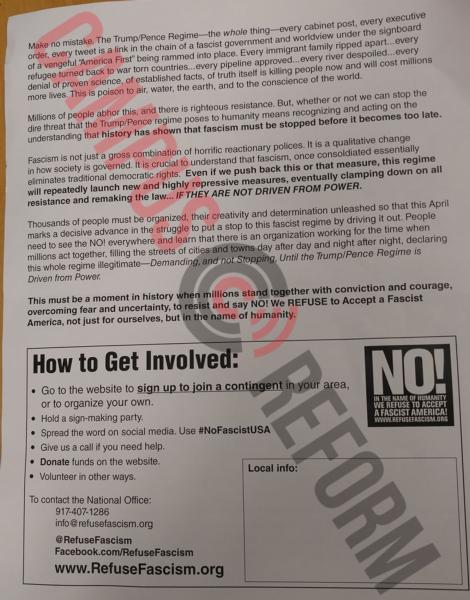 Another handout reiterates the group’s belief that Trump’s election was “not just a pendulum swing [from] Democrat to Republican,” but contends that there is still time to thwart the new administration.

“Even as the Trump/Pence regime is moving fast, they have not fully consolidated their regime, or, as yet, been able to implement their full program,” the flyer states, but warns that “this is their objective and it is very possible. It might only take a single serious crisis—international or domestic—for this regime to drop the hammer. We do not have much time.” 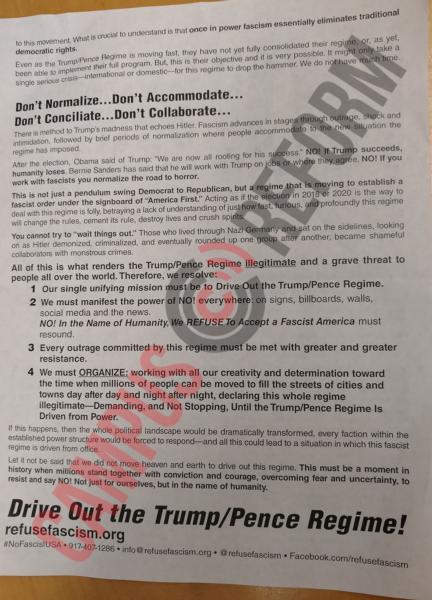 The “Refuse Fascism” demonstration coincided with a “HANDS OFF Syria!” protest organized by the Cornell Welcomes Refugees student group and Amnesty International at Cornell University, but a post in the discussion section suggests that the groups may not have been collaborating directly.

Cornell Welcomes Refugees elaborated in a statement to Campus Reform that Refuse Fascism was not directly involved in sponsoring the demonstration, explaining that the group simply "sent a few representatives to attend and speak," but did not represent any of the student groups that also participated.

"Cornell Welcomes Refugees and Amnesty International at Cornell University disavow Refuse Fascism because they centered themselves over the Syrian people at the Tuesday rally," the statement concluded unequivocally.