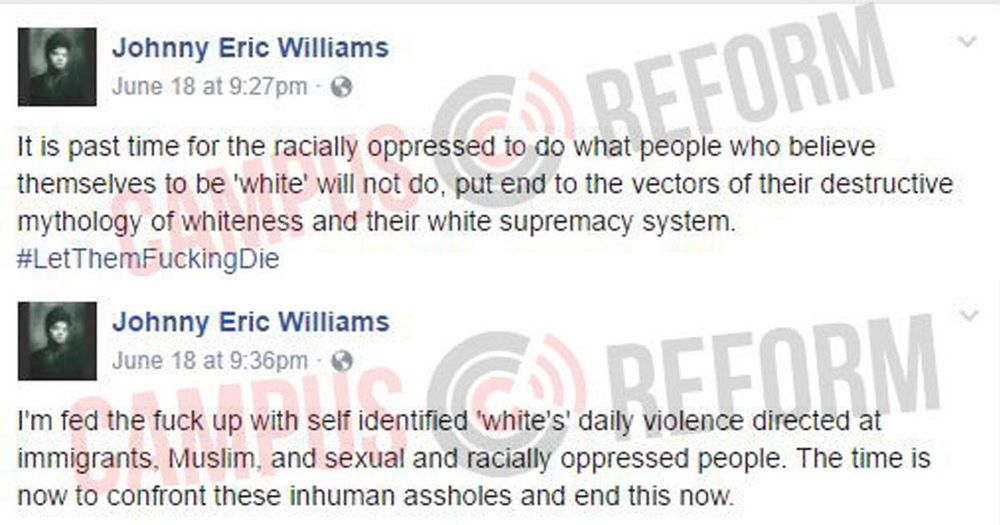 A professor at Connecticut's Trinity College seemingly endorsed the idea that first responders to last week’s congressional shooting should have let the victims "fucking die” because they are white.

“It is past time for the racially oppressed to do what people who believe themselves to be ‘white’ will not do, put end to the vectors of their destructive mythology of whiteness and their white supremacy system. #LetThemFuckingDie,” Trinity College Professor Johnny Eric Williams wrote in a June 18 Facebook post.

Two days prior, Williams had shared a Medium article titled “Let Them Fucking Die” in which the anonymous author suggests that “bigots,” such as those numbered among the victims of the congressional shooting, should be left for dead.

“What does it mean, in general, when victims of bigotry save the lives of bigots?” the author begins by asking, later saying that his black peers “imagine...that by becoming a shining example of this ‘righteous’ behavior, we might, somehow, guide these cannibals into becoming upright beings capable of following the very rules they enforce upon us.”

[RELATED: Prof: ‘some white people may have to die’]

The author goes on to offer a litany of life-ending situations the aforementioned “bigots” could find themselves in, advising his readers to “do nothing” in the way of helping.

“If you see them drowning. If you see them in a burning building. If they are bleeding out in an emergency room. If the ground is crumbling beneath them. If they are in a park and they turn their weapons on each other: do nothing,” the article instructs readers.

“Least of all put your life on the line for theirs, and do not dare think doing so, putting your life on the line for theirs, gives you reason to feel celestial. Save the life of those that would kill you is the opposite of virtuous. Let. Them. Fucking. Die. And smile a bit when you do,” the author concludes, in a post that was later shared by Williams.

Williams himself later suggested he is “fed the fuck up with self-identified ‘white’s’ daily violence directed at immigrants, Muslims, and sexual and racially oppressed people," saying, “the time is now to confront these inhuman assholes and end this now.”

“It is patently clear we black folks in U.S. have no rights that the white supremacy governing apparatus is willing to protect,” he later posted on his Facebook.

Campus Reform reached out to Williams for comment on the matter, but did not receive a response in time for publication.