OPINION: Why would we need to lie? 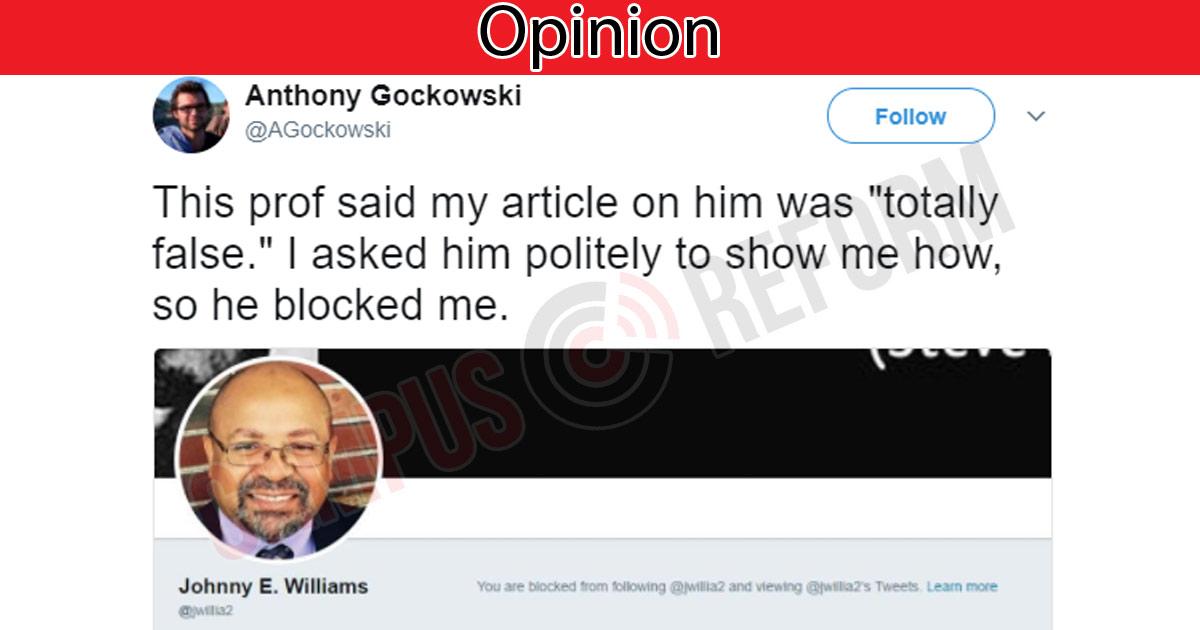 There has been a good deal of hand-wringing lately about backlash against professors who made inflammatory remarks.

When a person makes a public statement, it stands to reason that they should be prepared to defend their position; especially if they’re a college professor ostensibly committed to the free exchange of ideas. Indeed, a professor ought to welcome attention brought to their arguments as it expands their opportunity to debate an issue they evidently care about.

"There’s no need to misrepresent viewpoints that, when presented accurately, will discredit their advocates."

In recent weeks, though, the opposite reaction has been on display in response to Campus Reform’s reporting of provocative statements made by certain professors. The academy’s staunchest defenders have circled the wagons against the “threats to scholars” posed by...accurate reporting of their actual views.

University of Iowa Prof. Sarah Bond, for instance, complained to The Chronicle of Higher Education that the arguments she made in a recent op-ed were “remixed” by Campus Reform to suggest she had claimed that “white statues are racist.”

Campus Reform was careful to reproduce her contentions faithfully in our reporting, even including the entirety of the explanation she provided to the reporter who sought clarification of the views presented in her op-ed.

When Campus Reform asked Trinity College Prof. Johnny Eric Williams about posts on his Facebook page that appeared to suggest that first responders should have allowed victims of the recent congressional baseball practice shooting to die, he took a different course of action.

Williams had shared an article (adorned with a photograph of Rep. Steve Scalise and titled “Let Them Fucking Die”) that made exactly that case, followed two days later by posts of his own expressing disgust with “self identified ‘whites’” and suggesting that the “racially oppressed...put [an] end to the vectors of their destructive mythology of whiteness and their white supremacy system.”

At the end of the second post, he included the hashtag “#LetThemFuckingDie,” the only other place on his page where those words appeared.

When our reporter reached out to Williams for an explanation, however, he ignored the query and closed off public access to his page. He then accused the reporter via Twitter of reporting a “false” story, only to block the reporter’s account when asked for clarification. 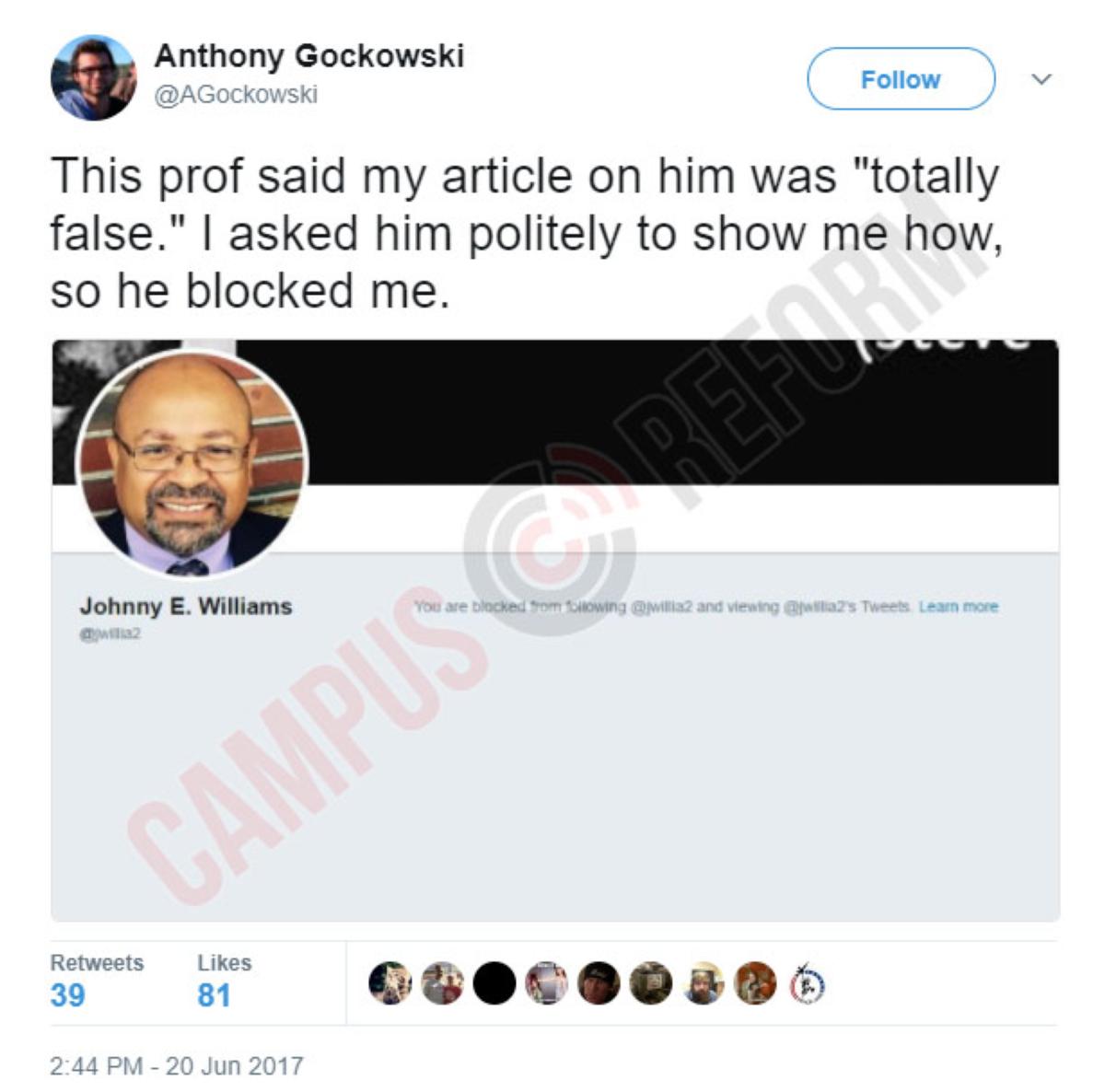 Syracuse University Professor Dana Cloud likewise felt no need to explain her tweet during a recent demonstration against Sharia law, in which she proclaimed that “[w]e almost have the fascists in [sic] the run” and called on “Syracuse people” to “come down to the federal building and finish them off.”

She later accused “other right-wing activists and columnists” of “capitalizing on the ambiguity of the phrase and citing it out of context” to initiate a “witch-hunt” against her based on the fact that she is “a socialist, lesbian, and decades-long activist against oppression and social justice” (we can only presume that she meant to say she has been an activist “for” social justice; in any case, we only mentioned the socialist bit, which is in her Twitter profile).

Campus Reform didn’t receive even a perfunctory response from Katherine Dettwyler, the University of Delaware adjunct professor whose contract the school has already pledged not to renew, after she made extensive remarks on social media asserting that Otto Warmbier “got exactly what he deserved” after he’d been tortured to death at the hands of North Koreans because he was typical of the “rich, white, clueless males” she teaches.

Finally, there is the case of Princeton University Professor Keeanga-Yamahtta Taylor, who complained bitterly about having had to cancel her upcoming speaking engagements after Campus Reform reported that she declared President Trump a “racist, sexist megalomaniac” in her commencement address at Hampshire College.

Taylor says she received “a deluge of hate-filled emails” after the story attracted public notice, spurred on by a Fox News segment, for which she blamed the media outlets that covered her remarks.

Each professor claims to have received vitriolic and threatening communications from anonymous individuals incensed by the statements reported by Campus Reform and other outlets, and Trinity College even took the extraordinary step of closing its entire campus after receiving unspecified threats.

As Will Creeley of the Foundation for Individual Rights in Education (FIRE) pointed out recently, “responding to speech with threats is morally repugnant, illiberal, and potentially illegal.”

Campus Reform couldn’t agree more. There isn’t a single person affiliated with our organization, in fact, who does not consider it abhorrent that anybody would engage in such reprehensible behavior over a mere political dispute.

These threats are not generally motivated by any real confidence in one’s own positions, but rather by a sense of intellectual impotence—a condition that our stories should evoke only in liberal readers.

Campus Reform’s mission is to expose liberal bias and abuse in higher education; pursuit of that objective requires neither embellishment nor deception because liberal bias in academia is as ridiculous as it is rampant.

There’s no need to misrepresent viewpoints that, when presented accurately, will discredit their advocates.

This applies equally to other outlets that have covered Campus Reform stories in ways that distorted their original meanings, in response to which we can only ask: Why risk undermining your own credibility by exaggerating a story that already pushes the bounds of credulity?

Isn’t it enough that a professor made the case that popular appreciation for the aesthetic beauty of white marble is “a dangerous construct that continues to influence white supremacist ideas today?” Is it necessary to reduce her argument to “white statues are racist?”

While our friends in the professoriate have some legitimate concerns, they don’t do themselves any favors by overstating their case, such as when they accuse their students of “harassment” for recording political screeds they deliver in class and elsewhere.

Prof. Taylor exemplified that tendency, declaring in a lengthy Facebook post that “Fox did not run this story because it was ‘news,’ but to incite and unleash the mob-like mentality of its fringe audience, anticipating that they would respond with a deluge of hate-filled emails—or worse.”

We beg to differ.

The level of public interest surrounding the story suggests that it was, in fact, considered “news” by a great many people. That some of those individuals sank to the level of sending threats doesn’t diminish its news-worthiness.

Orange Coast College learned that lesson earlier this year, when a public outcry forced it to retract a one-year suspension it had imposed on a student for recording one of his professors engaging in a classroom rant in which she called Donald Trump’s election “an act of terrorism.”

More recently, faculty at Northern Arizona University lamented that their state does not prevent students from divulging the contents of their lectures, saying that recordings have “made it a lot scarier in the classroom,” and therefore are a threat to academic freedom. This is the sort of lazy argumentation Campus Reform has endeavored to expose; it’s clear that no mere recording has the power to undermine academic freedom.

Recordings do not threaten people, and angry letters do not terminate an employment contract. Those who make threats are only empowered by the perception that their despicable efforts have succeeded, leaving responsibility for the sanctity of academic freedom solely in the hands of the administrators tasked with preserving it.

The very idea that reporting a professor’s honestly-held, publicly stated beliefs (in their own words, no less) would constitute “harassment” belies a remarkable lack of confidence among some faculty members in the strength of their arguments.

Of course, if ever a professor has reason to worry that their words might be taken out of context, or that uninitiated readers will miss certain nuances of their argument, there is a simple safeguard: Respond when Campus Reform comes calling.