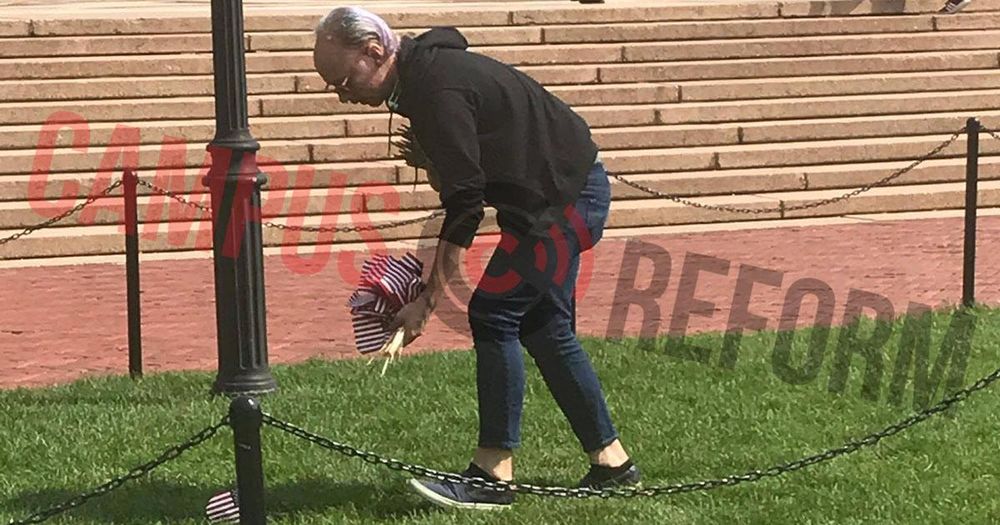 Members of Columbia University College Republicans walked out of class Monday afternoon to find a man removing the flags from their 9/11 memorial.

The unidentified man removed a row of at least 50 flags, threw them in the trash, and went back for more. An angered Columbia University ROTC student recorded the event.

“I ran over and asked him what he was doing, and was laughed at with no proper response,” the student recounted. “I asked a nearby Public Safety officer what could be done; but he was well within his rights to protest, so I recorded the video.”

The University is currently looking into the situation and has not yet identified the man.

“I am not surprised that this happened on our campus. Ever since the election, I believe that this campus has rejected any form of pro-American beliefs or sentiments,” Columbia University College Republicans President Ari Boosalis told Campus Reform.

“I am personally disgusted by the actions of this individual,” Boosalis added. “September 11th is a day where all Americans no matter their race, creed, or political affiliation should come together to remember those who have fallen and risked their lives for our safety.”

Several students and a local veteran removed the mass of flags from the trash and planted them back in the ground. Within minutes their numbers grew from five to 15 as passersby pitched in to help.

“This event is by no means political, but a day of remembrance and tribute, especially to the first responders who gave up their lives in order to save others,” Boosalis remarked. “We should never forget 9/11 and its legacy on our country.”

The club’s memorial was part of Young America's Foundation’s “9/11: Never Forget Project,” a nationwide memorial dedicated to “honoring the victims of radical Islam” with over 206 participating campus chapters.

According to Boosalis, the club, in coordination with YAF, has faced unfair treatment throughout the year, including university policy changes that clamped down on requirements for conservative speakers on campus.

Campus Reform reached out to Columbia University Public Safety for comment but did not receive any responses in time for publication.