Some Clemson University freshmen are taking issue with the “safe space” portion of a mandatory diversity course for first-year students, calling the effort “misguided.”

Clemson freshman Nicholas Bunker provided Campus Reform with pictures of several fliers handed out during CU 1000, including one titled “community dialogues,” which decrees that “we will speak from personal experience, understanding that others may have different experiences and that each experience is valid.”

"Don't feel too ashamed if you find the ‘Community Dialogue’ session a bit misguided."

“We recognize that learning is not always comfortable. We will speak our discomfort and allow space for others to do the same,” the flier continues, mandating that, “we will respect and maintain confidentiality in the space; the experiences of others are their stories to tell.”

“We will participate fully in the Community Dialogue experience even when we may not be interested or in agreement with what is said,” the flier concludes, elaborating that “this includes both verbal and non-verbal engagement.” 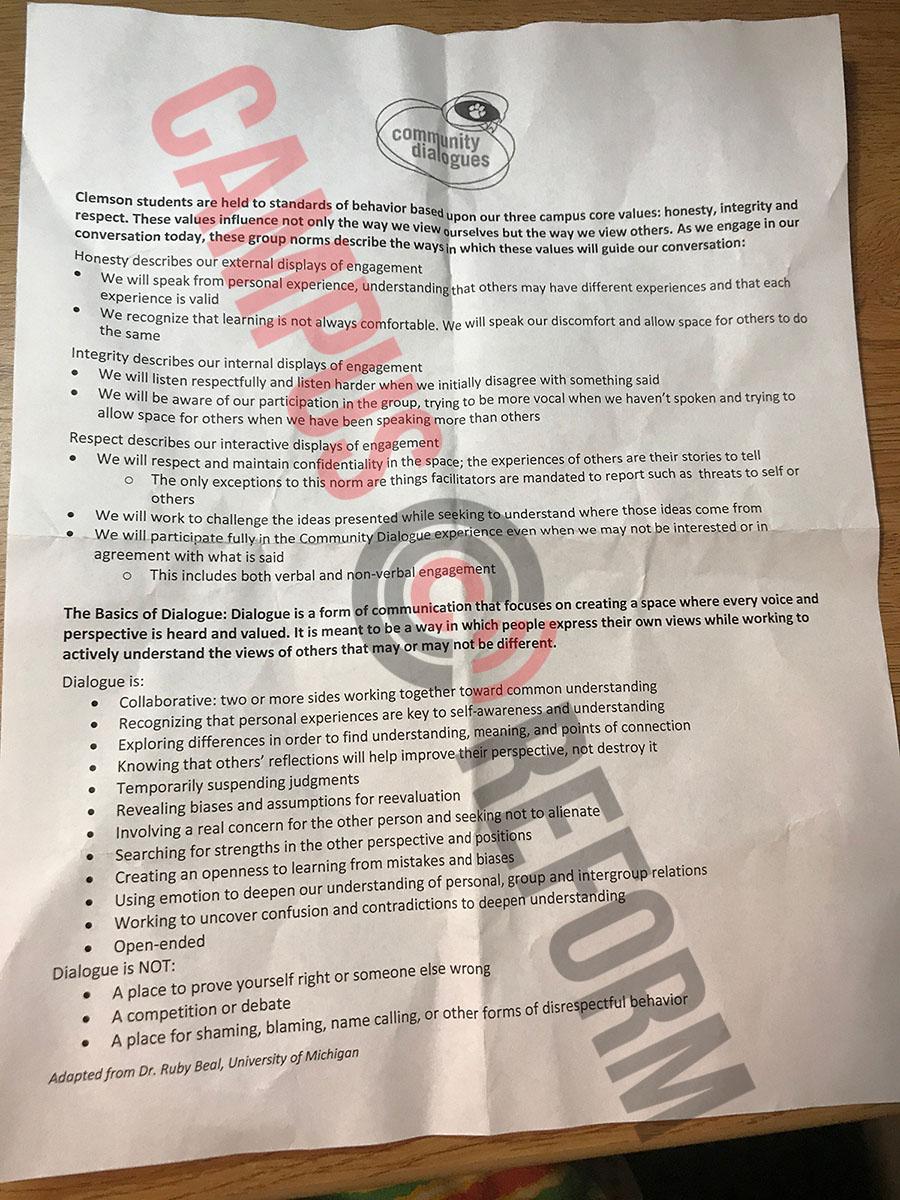 Another flier, a product of Clemson’s Gantt Multicultural Center, features a graphic of an atom, with various “social identities”—such as “Gender,” “Sexual Orientation,” “Body Size/Type,” and “Ableness”—orbiting the “nucleus” in place of electrons.

The flier lists “context”—signified by an arrow pointing to a blank area around the atom—as “Family Background,” “Sociocultural Conditions,” “Current Experiences,” and “Career Decisions and Life Planning,” while the “nucleus” consists of “Personal Attributes,” “Personal Characteristics,” and “Personal Identity.” 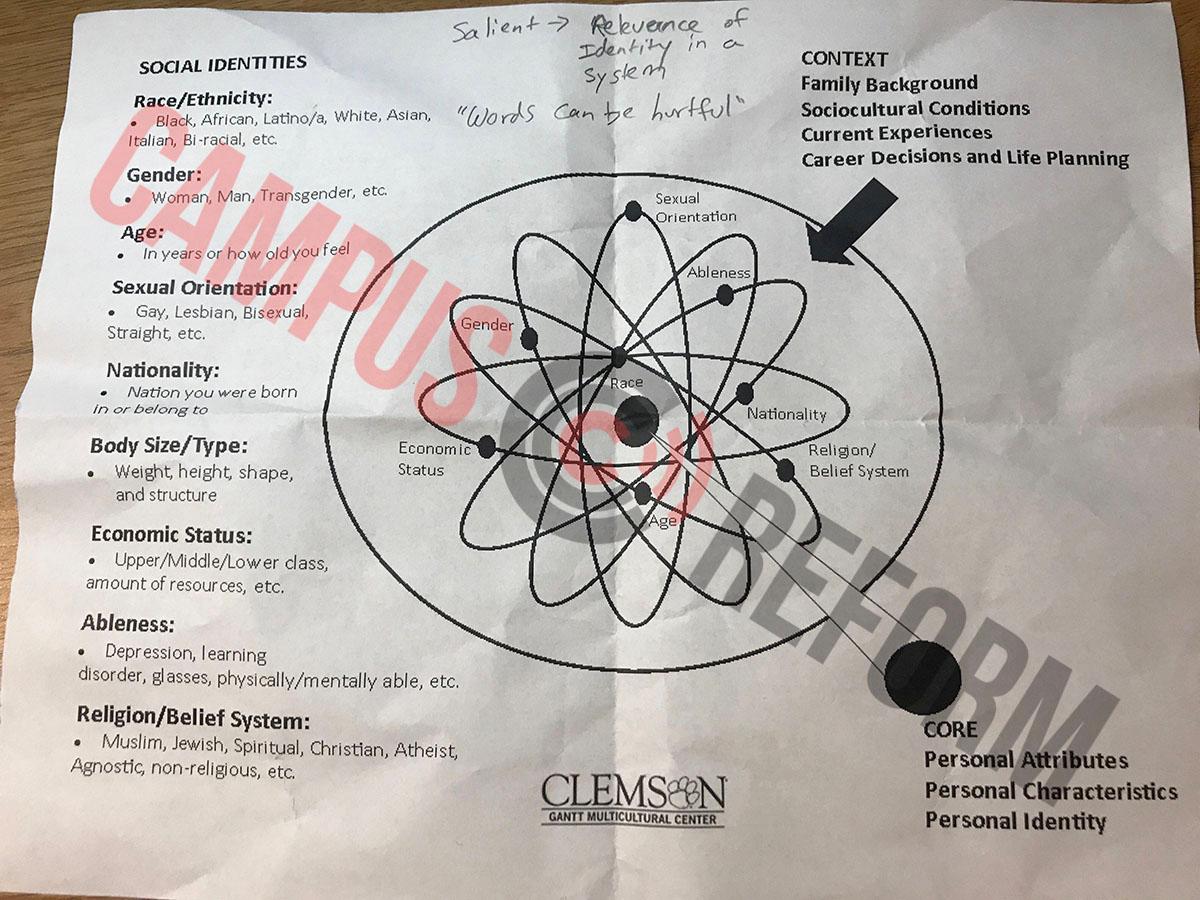 Bunker reported that during his community dialogue session, facilitators informed participants that “this is a safe space” before adding that “dialogue is not a debate; you aren’t trying to win.”

“The final thing was we got in a two-ring circle and they asked us to talk to the other person about a time [when] ‘our words were taken the wrong way,’” Bunker continued. “They basically asked questions leading people to say they need to be careful about how certain things affect other people differently.”

“It was to no surprise of my own when I walked into the Rhodes Annex for the mandatory CU 1000 ‘Community Dialogue’ session and was told that I was presently confined to a ‘safe space’ where my ‘social identity’ could not be judged by others, and vice versa,” Drwal wrote.

“The exercise was actually creating an environment whereby people were being asked to speak about things that segregate themselves from others,” she continued, urging her “fellow Clemson University freshmen” not to “feel too ashamed if you find the ‘Community Dialogue’ session a bit misguided.”

In a short video provided to Campus Reform chronicling the start of one community dialogue session, the facilitator states that “[w]e have diversity on this campus and will eventually lead Clemson to find more diversity in our places of employment, and our social groups, and in our media.

“Clemson and employers feel it is important for us to be able to articulate what we believe, while understanding the beliefs of others,” the facilitator continues. “We recognize the difficulty in having conversations surrounding diversity, and hope to help in this process by teaching the tool of dialogue.”

In June, Campus Reform reached out to Dr. Sue Whorton, the instructor of record for CU1000, who explained that the purpose of the community dialogues session is to help students better understand their own identities and how they affect interactions with others.

“There’s a session that’s been in there since its inception. It’s called community dialogues, and the goal of community dialogues is to help students meet other students, and during that session what they do is they talk about the different identities that are salient to us individually,” Whorton responded.

Whorton is a current member of “Indivisible Clemson,” a Facebook group described as “a newly formed group of concerned citizens from South Carolina's 3rd Congressional District coming together to actively resist the Trump agenda.”

Clemson Professor Bart Knijnenburg—who recently caused an uproar with a Facebook post declaring that “All trump supporters, nay, all Republicans, are racist scum”—also belongs to the group.