Two days after announcing that Chelsea Manning would serve as a visiting fellow at the Kennedy School’s Institute of Politics, Harvard University issued a statement rescinding the invitation.

Manning, a former U.S. Army intelligence analyst convicted of six counts of espionage, served seven years of a 35-year sentence before President Obama commuted it in January 2017. Before and after Manning’s May release from confinement, many celebrated the former private as a whistleblower and transgender activist.

"Harvard’s actions implicitly tell its students that you too can be a fellow at Harvard and a felon."

Harvard’s September 13 announcement highlighted its “first transgender Fellow” and described Manning as a “network security expert” and advocate “for queer and transgender rights.” The biography also implied that Manning acted as a “whistleblower.”

In a September 14 letter to Dean of the Kennedy School Douglas Elmendorf, former Acting Director of the CIA Michael Morell announced that he was resigning from his fellowship at the Belfer Center, another Kennedy School project.

“I cannot be part of an organization—The Kennedy School—that honors a convicted felon and leaker of classified information,” he wrote, reiterating that Manning had put American lives at risk and received bi-partisan condemnation.

Morell also mentioned that while he fully supports Manning’s rights, he believes the fellowship could encourage others to leak information. 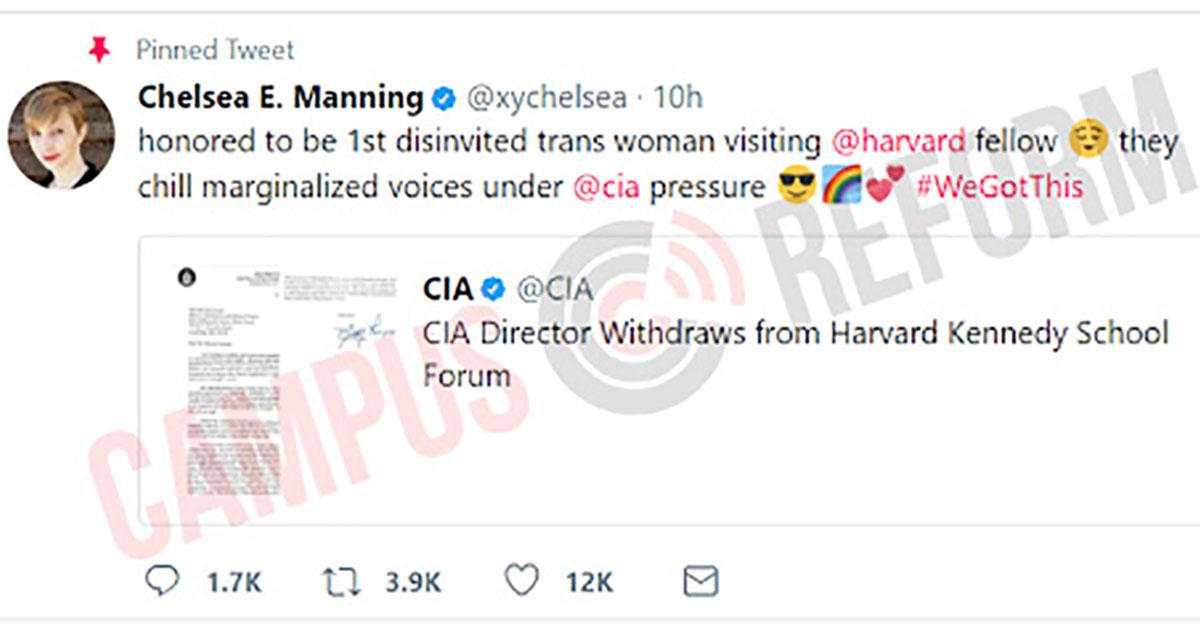 “Ms. Manning betrayed her country,” and “stands against everything the brave men and women I serve alongside stand for,” he wrote.

Pompeo made it clear that his decision had “nothing to do with Ms. Manning’s identity as a transgender person” and “everything to do with her identity as a traitor.” He lamented that “Harvard’s actions implicitly tell its students that you too can be a fellow at Harvard and a felon,” and slammed the university for giving Manning’s “treasonous actions” its “stamp of approval.”

On the morning of September 15, Elmdorf issued a statement on behalf of the Kennedy School cancelling Manning’s fellowship, saying the school invites people with a “wide range of views” to speak and answer questions, including “controversial” individuals. He specified that the school invited Manning because it looks for those “who have significantly influenced events in the world even if they do not share our values.”

Elmdorf maintained that the title “Visiting Fellow” is merely a designation for visiting speakers and that Harvard “did not intend to honor [Manning] in any way or to endorse any of her words or deeds, as we do not honor or endorse any Fellow.”

“However, I now think that designating Chelsea Manning as a Visiting Fellow was a mistake,” he wrote, adding “I still think that having her speak in the Forum and talk with students is consistent with our longstanding approach.”

Elmdorf apologized to Manning, who responded with a Tweet: