Students at The University of Texas are urging their school to protect free speech after a conservative student group’s A-frame board was repeatedly vandalized last week.

The advertisement board that sought to recruit new members to join the Young Conservatives of Texas was allegedly defaced by the “Revolutionary Student Front,” information about which was written on the back of the wooden placard.

"Differences in political opinion should be settled in a friendly debate or at the ballot box, not by violence."

“Racists off our campus. Build student power. Join the Revolutionary Student Front,” the vandalized a-frame board read. “It is right to rebel!” 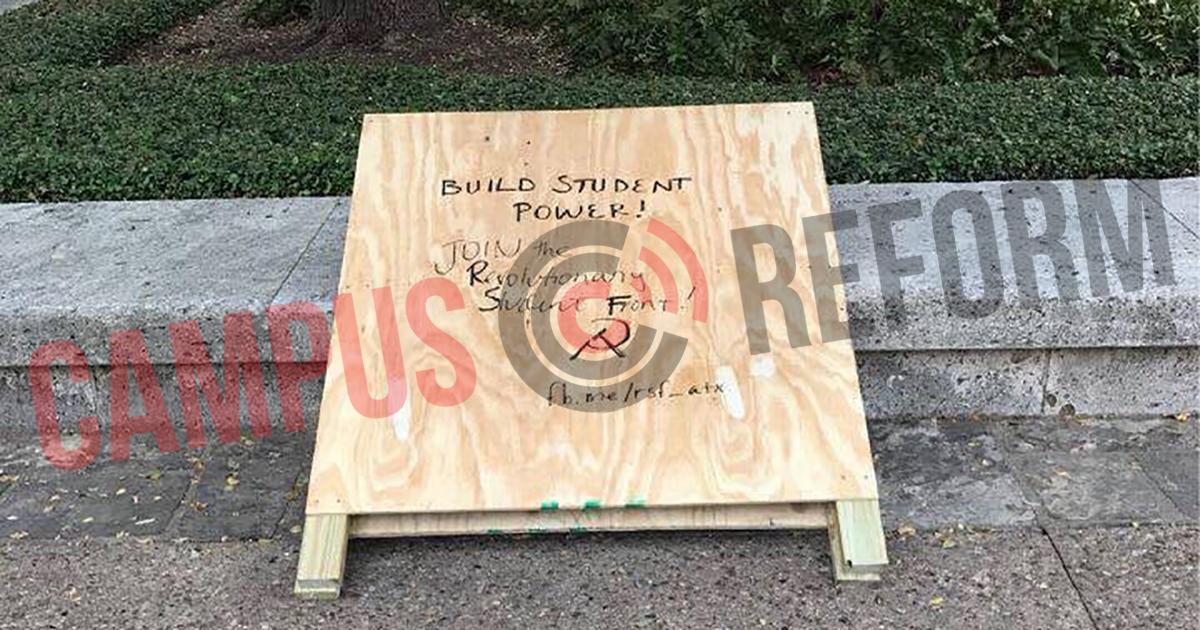 The front of the recruitment board was also defaced with graffiti, including an Adolph Hitler mustache that was drawn onto a caricature of Uncle Sam, and the word “racism” that was written below the conservative group’s call for “liberty” and “justice.”

In response, the students are planning to submit legislation to the student government calling on the university to recommit itself to protecting free speech and denouncing acts of vandalism.

“The Young Conservatives of Texas promptly notified Director of Student Activities Susan Buckenmeyer; and [all] following instances of vandalism since then were registered with the University of Texas Police Department,” the students wrote in a draft of the student government legislation obtained by Campus Reform.

Currently slated for a Tuesday submission, the legislation encourages the university to “condemn the instances of vandalism, intimidation, and criminal activity carried out on campus,” and also calls upon the school to “commit itself to preserving the free speech and property rights of all peaceful students, regardless of political orientation.”

“If we do not make it clear that violence and intimidation are not acceptable forms of community engagement, then we allow for future instances such as these to re-occur,” Shalom Soman, a coauthor of the student government legislation, said in a statement to Campus Reform.

“We should make it clear that differences in political opinion should be settled in a friendly debate or at the ballot box, not by violence or intimidation to forcefully quiet communities on our campus," he added.

Soman also underscored that it is "imperative that our campus defends freedom of speech for all Longhorns, regardless of their political affiliation.”