Princeton op-ed: Conservatives have no right to free speech

An op-ed in the Princeton University student newspaper attacking conservatives' right to free speech has triggered an impassioned response from many students, and even a professor.

Princeton student Ryan Born argued in his op-ed for The Daily Princetonian that "when conservatives appeal to 'free speech,'" it is safe to ignore them, since "they are appealing to a right that does not exist.”

"In my belief, when conservative ideas are opposed, there is no right that is being infringed."

“In my belief, when conservative ideas are opposed, there is no right that is being infringed,” he adds.

Notably, an editor's working comments were accidentally left in the print edition of The Princetonian, showing that even the paper’s allegedly left-leaning editors were uneasy with the argument.

“I don’t think this makes sense,” the editor wrote next to Born’s comments, asking that he add “in my belief” to the sentence. 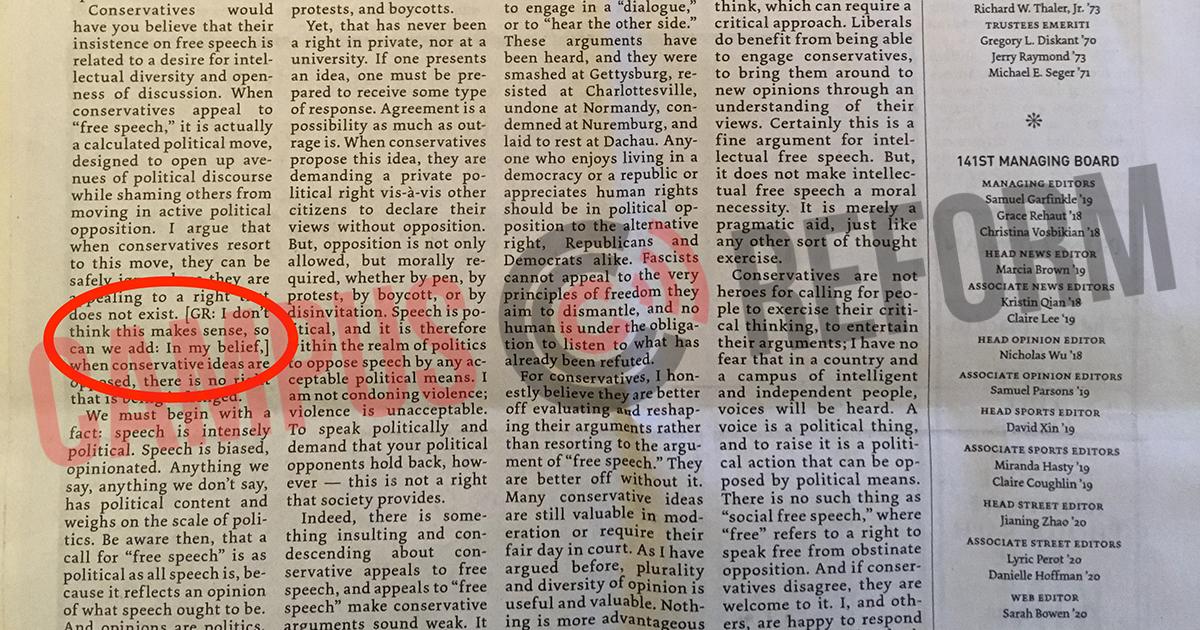 “Because ‘free speech’ is a cornerstone of our rights under the Constitution, it can appear that conservatives' socially free speech has this constitutional tradition as its backbone,” he continues, but contends that conservative speech “is something much different" because "conservatives are interested in being able to propose their ideas without any political opposition to their right to speech.”

"If the only justification conservatives can offer for their ideas is that they merely exist, then let me say as Trotsky did: 'You are miserable bankrupts, your role is played out; go where you ought to go—into the dustbin of history!'" he declares.

Born closes by stating that there exists "no such thing as 'social free speech,' where 'free' refers to a right to speak free from obstinate opposition. And if conservatives disagree, they are welcome to it. I, and others, are happy to respond accordingly."

"Really, that's the problem, what conservatives can't stand, what they can't imagine could be true: speech is free,” he concludes.

Following Born’s controversial article, two responses appeared in The Princetonian, the first from student Nicholas Sileo, and the second from Dr. John Londregan, Professor of Politics and International Affairs at Princeton, whom Born personally attacked in his original op-ed.

Sileo told Campus Reform that he found himself strangely "enamored" with Born's piece, especially where he "concedes that conservatives are willing to put their ideas on the table—debate them, argue them, express them—but then states that he’s 'arguing against their right to be heard.'"

"After seeing an article that quickly called to completely dismiss many of my viewpoints, many of my friends' viewpoints, many people whom I haven't met yet; an article that conflated us with some of the most criminal men in human history; and one that was all over the place with its claims, logic—and accusations, really—it was something that I wanted to publish a response to," Sileo remarked, saying he "wanted to try to show, especially to the incoming Class of 2021, that this isn't what the university is about.”

Additionally, Sileo told Campus Reform that the paper had edited out his postscript, in which he agreed with Born’s editor.

“I don't think that your argument makes sense either. While I support your right to speak freely, let me say as Trotsky did: 'Technique is noticed most markedly in the case of those who have not mastered it,’” the note would have read.

Meanwhile, Londregan, who notes that his usual inclination is to "forbear rather than publicly single out an undergraduate for criticism," claims that “the circumstances in this case are special,” calling Born’s article a “lengthy screed” that “groans on, column after column, making a series of increasingly bizarre assertions."

Londregan acknowledges that Born was "within his First Amendment rights to express his appalling point of view,” but adds that “in each of these possible interpretations of his intent, the rest of us have a moral obligation to condemn what he has said.

"Shame on him!" he concludes. "But rights are rights, and Born has shamefully exercised his right to be wrong."