College costume crackdown ramps up as Halloween draws near 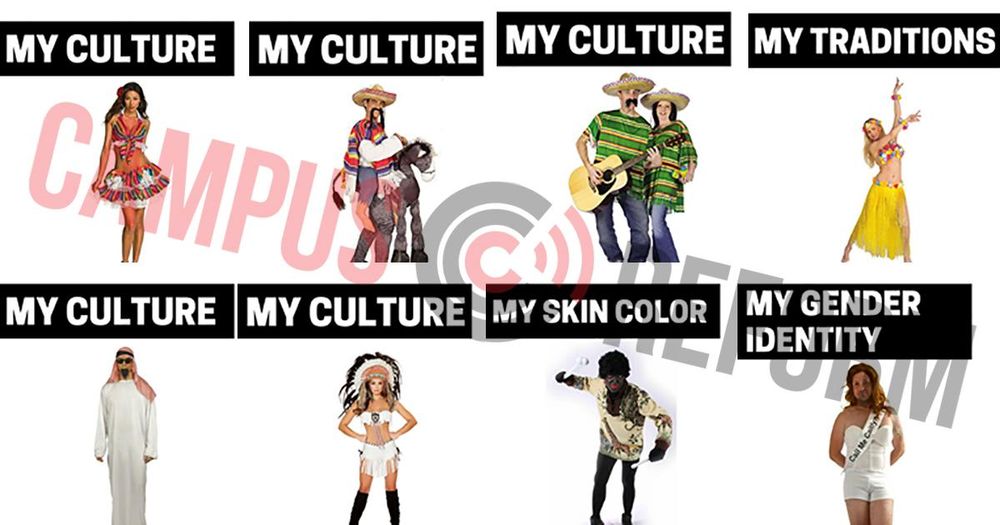 As another Halloween season approaches, an ever-growing number of universities are cracking down on offensive costumes, even hosting panel discussions to instruct students on what to avoid.

Humboldt State University, for instance, plans to host a discussion Monday on how “cultures are disregarded, mocked, or simply dehumanized” by Halloween costumes, encouraging students to avoid “cultural appropriation” in their costume selections.

Several other schools, such as Oregon State University, Michigan State University, and the University of Colorado-Boulder, will host similar discussions on the meaning of “cultural appropriation” in the context of a “critical examination of Halloween costumes.”

Princeton University, meanwhile, recently offered a “conversation circle” to students to help them “engage in a dialogue about the impact of cultural appropriation, Halloween, and why culture is not a costume.”

At still other schools, administrators have chosen to get involved in the discussion directly.

Millersville University Vice President of Student Affairs Brian Hazlett, for example, sent out a recent campus-wide message to remind students that Halloween is a “time when thoughtfulness and sensitivity can be forgotten, especially when selecting a costume.”

“It’s important to be mindful that making/buying/wearing a costume based on a culture different from our own has the potential to negatively impact the inclusive community we as an institution strive to maintain,” he wrote, listing several examples of potentially offensive costumes, like “feathered headdresses, turbans, ‘war paint,’ or other skin tone modifications.”

[RELATED: Universities warns against costumes based on other cultures]

“Costumes that disrespect, alienate, or ridicule segments of our community based on race, nationality, religious beliefs, or gender expression disrupt our community’s sense of inclusivity and unity and should be avoided,” he declared.

University of Louisville Vice Provost for Diversity and International Affairs Mordean Taylor-Archer sent out a similar email to students, asking them to “take time to consider your fellow students and colleagues when choosing costumes and themes.”

“It is important to remember that blackface and other forms of cultural appropriations [sic] are culturally insensitive and may be offensive to others. This is particularly true of costumes that depict other races, cultures, and/or identities in a negative light,” she continued, encouraging students to carry “this sensitivity and behavior” beyond Halloween and into “ball games and other activities.”

The University of Michigan also published a statement to its website to offer its annual admonition against cultural appropriation, saying such practices are “often adopted by those who hold power and privilege in society, while the cultures they are misrepresenting tend to be marginalized and disenfranchised.”

Explaining that “this can take the form of Inuit costumes, Geisha costumes, gangster Costumes [sic], Native American costumes, etc.,” the school reminded students that “a costume that is focused on aspects of a culture that is not yours can reinforce offensive stereotypes and humiliate the people you are attempting to represent.”

Meanwhile, the University of Nebraska-Lincoln simply published a short list of “guidelines for choosing fun, non-offensive” costumes, such as avoiding “cultural-based costumes” because they “perpetuate stereotypes” and not “changing your natural skin tone to mimic another person’s skin tone” since doing so is “NOT ok.”

“Cultural appropriation is the adoption or use of elements of one culture by members of another culture. It can be seen as wrongfully oppressing the minority culture or stripping it of its group identity and intellectual property rights,” the guidelines elaborate, noting that while “it may be a temporary costume” for students, for “minorities the stereotypes perpetuated by these costumes are lasting.”

As Campus Reform previously reported, many other schools, most recently the University of Arizona, are participating in the annual “Culture not a Costume” campaign.

According to The Daily Sun, posters have been spread around campus asking students a series of questions on whether their costumes are culturally appropriative, such as “does it misrepresent a culture?” and “is it hurtful or offensive to others?”

Apparently, though, the signs note that even if students answer “no” to these questions that “doesn’t mean appropriation isn’t happening.”

Butler University, on the other hand, took a more optimistic approach, hosting a Halloween party in “celebration of cultural competency,” while Swarthmore College encouraged students to consult with “Diversity Peer Advisors” to better understand the importance of cultural sensitivity, though it also included a strict warning for students attending its annual Halloween party.

“Please exercise sensitivity and basic human decency when selecting a costume. This includes avoiding cultural appropriation in your costume selection,” the school warned. “In addition[,] you should avoid costumes that trivialize the practices, traditions or trauma of groups of people. If you are unclear about what this means, the Diversity Peer Advisors are a great resource to assist you to gain greater understanding.”