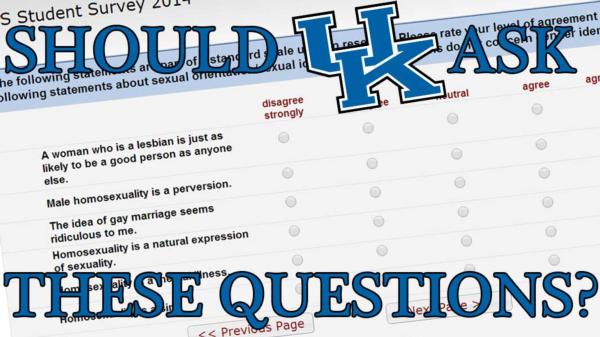 A campus-wide email from the University of Kentucky’s health services has left some students feeling uncomfortable after asking intrusive questions about religion and sexuality.

According to the email obtained by Campus Reform, students were asked to take a quick 5-10 minute survey as the University Health Services “need your input on health care services for students at the University of Kentucky.” If they completed the survey, students were entered into a drawing for a $5.00 gift card.

“I don’t know who is reading this. I didn’t want to be labeled as a bigot because of my personal religious beliefs.”

Though the survey begins by asking questions about the average wait time students experienced while at the center, it quickly gets more personal—by asking about religious and sexual preferences.

Students who identified as LGBT early on in the survey were presented with a unique list of statements to agree or disagree with, including “If it were possible, I would choose to be straight.”

The survey fails to promise any sort of reassurance of confidentiality, but Jay Blanton, a spokesperson for the university, told Campus Reform the survey was indeed classified.

“I don’t think it matters what my opinion is on [LGBT students] since I’m not the kind of person who discriminates and I’m not a health care provider,” one student who wished to remain anonymous told Campus Reform in an interview.

The student felt uncomfortable while taking the survey as the email provides a link unique for each person and doesn’t mention who is reading and recording the survey responses.

“I don’t know who is reading this,” the student said. “I didn’t want to be labeled as a bigot because of my personal religious beliefs.”

Blanton confirmed to Campus Reform that the survey was sent to students by university employees.

“Yes, this survey was distributed to students by our University Health Service enrolled this semester,” he said. “The intent of the survey was to understand better the utilization of university health services on the part LGBT students.”