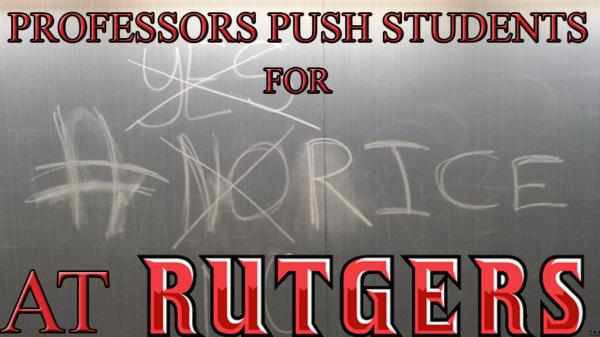 Professors at Rutgers University pressured students to attend a teach-in protest of Condoleezza Rice as the school’s commencement speaker.

“As the protest continued there was allegedly damage to glass door on college avenue and vandalized classrooms by writing #NORICE on classroom walls,” student and New Jersey College Republicans Chairman Donald P. Coughlan said in an interview with Campus Reform on Tuesday.

“Most students know these professors very well and these emails intimidated students who do not share the opinions of the professors.”

Rice backed out of the engagement Saturday — the same day as the protest — despite having the support of the Rutgers University Student Assembly, the school administration, and student organizations including the Eagleton Undergraduate Associates and Greek Life at Rutgers University.

Coughlan said that many students contacted him to say they felt “intimidated” by the professors.

“Students were concerned that professors would send out emails that clearly show a biased view and are then concerned about voicing their opinion to these same professors who could influence their GPA,” he said.

On Sunday, Coughlan wrote an open letter to the administration expressing these concerns.

“The e-mails disturbed students as they were from Robert Lake, head of the doctoral program at the Edward J. Bloustein School of Planning and Public Policy[,] and William Field, the Undergraduate Political Science Program Director,” it read.

“Most students know these professors very well and these emails intimidated students who do not share the opinions of the professors,” he continued.

Field sent an email to political science majors and minors telling them they should attend the protest, which also offered free food, drink, and live music.

“Some Rutgers students have been invited to the cable talk show Fox and Friends to discuss student concerns; concerned faculty have organized a teach in here on campus,” Field wrote on May 2.

“I invite you to open the attached flier and to attend the teach in to learn more about why students and faculty are upset.”

According to Coughlan’s letter, Field “ even congratulated one of the lead organizers of the protest that allegedly damaged university property.”

Other professors’ emails detailed why Rice was an unacceptable choice.

“Condoleezza Rice helped launch a war on false pretexts and helped authorize torture. Should she be giving our Commencement address?” a public policy professor, Meredeth Turshen, wrote in another email which was later forwarded to students. 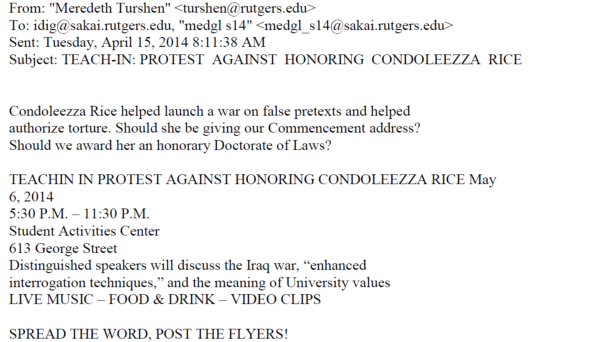