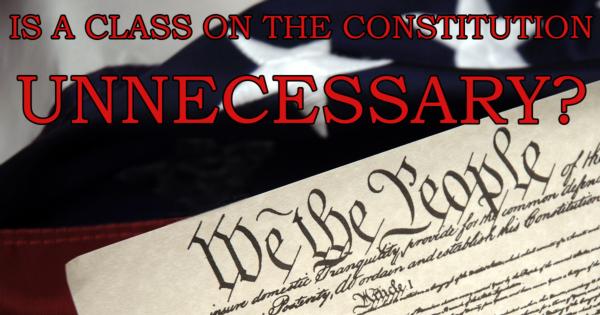 The student editorial board of University of South Carolina’s (USC) Daily Gamecock argued this week that “[w]hile knowledge of our country’s founding documents is undoubtedly a good thing to have [. . .] most students don’t need it.”

The South Carolina legislature recently began pressuring USC over an old law that requires universities to teach the provisions and principles of the Constitution, Declaration of Independence, and Federalist Papers, as well as “the study of and devotion to American institutions and ideals.”

"The truth is, if a Schoolhouse Rock song can cover a subject, it isn’t necessary in a college curriculum."

The editorial board argues that “[s]tudents who are pursuing a field outside political science or journalism won’t necessarily need to know about these documents to the extent that the class would be aiming to teach them” and that the class “could hurt a studen’ts GPA when it isn’t even that central to their degree.”

Authors of the editorial, published in The Daily Gamecock seem most concerned about financial consequences amid rising tuition.

“If the state is going to require that something be done, it’s only fair that they give us the funding for it,” the editorial says.

“Telling USC that we have to add on another class, with all the including expenses, without giving us any money to do so is like telling someone who never learned how to swim that they have to cross Lake Murray or face retribution,” the editorial board wrote. “It’s borderline ridiculous to make something required by law and not provide the funds to do so, thereby forcing us to drain our own resources.”

A pair of South Carolina schools already have such provisions. Legislators cut funds from the College of Charleston and University of South Carolina-Upstate after they became aware of mandatory pro-LGBT readings. That funding was later reallocated to fulfill the law regarding the teaching of the Constitution.

According to the editorial, USC President Harris Pastides recently came under fire for calling the law “archaic,” and Vice Provost Helen Doerpinghaus said that USC follows the spirit of the law by handing out pocket constitutions on Constitution Day.

The editorial board says that students have been learning about the Constitution “since we were in the first grade,” and argue that the class should be an elective “so that people who don’t need it or have already taken a similar class don’t need to be saddled with it.”

“The truth is, if a Schoolhouse Rock song can cover a subject, it isn’t necessary in a college curriculum,” the board wrote.