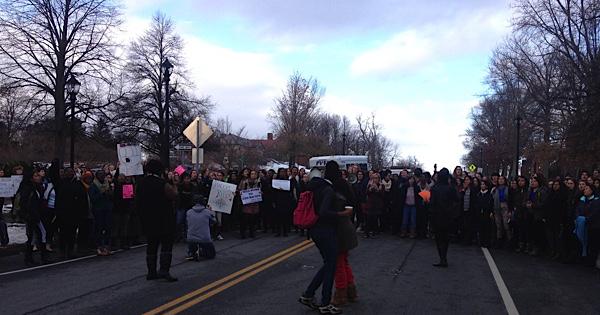 “White folks” in Massachusetts were told to keep their hands down if they joined a campus walkout Monday afternoon to protest the recent grand jury decision in the shooting of teenager Michael Brown in Ferguson, Mo.

Susanna Holmstrom urged classmates Sunday night not to raise their hands in mock surrender in the “ Five College Mass Walk Out” if they were “white folks.”

“I encourage white folks participating tomorrow to keep our hands down, to avoid centering ourselves in the actions, and to listen much more than we speak,” Holmstrom said on the event’s public Facebook page. 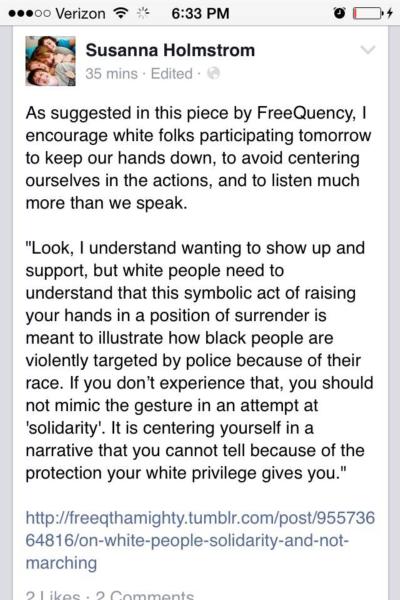 “I understand wanting to show up and support, but white people need to understand that this symbolic act of raising your hands in a position of surrender is meant to illustrate how black people are violently targeted by police because of their race,” the post says. “If you don’t experience that, you should not mimic the gesture in an attempt at ‘solidarity.’ It is centering yourself in a narrative that you cannot tell because of the protection your white privilege gives you.”

“This is a call for action coming directly out of Ferguson,” Dianna Tejada, an MHC student who helped organize the multi-college walkout, told Campus Reform. “They called, and we answered.”

In a campus-wide email to all students, Marcella Hall, Dean of Students, encouraged students to attend the walk out.

“Please remember faculty and administration are here to support you with questions, comments and concerns about Ferguson, race and social justice,” Hall, who attended Monday’s protest, wrote in the email obtained by Campus Reform. 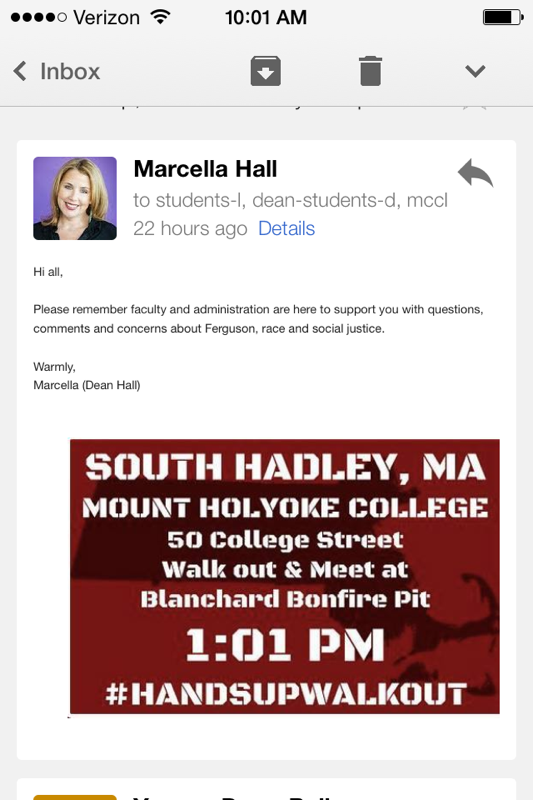 The protest began as a rally outside the MHC student center Monday at 1:01 PM, the time of Michael Brown’s death. The rally quickly escalated into a march and group leaders led protesters through campus and onto the streets of downtown South Hadley, Mass.

Within minutes, College Street, the main road in town, was shut down when protesters blocked traffic for half an hour. Police officers arrived on the scene after a few minutes and protesters chanted, danced, and chastised them.

The large group—totaling upwards of 500 people—included students from MHC, community members, professors, and even high ranking deans of the college.

Ultimately, Holmstrom’s plea was ineffective as many white students and community members raised their hands in the middle of the street throughout the protest.

Student organizers at MHC and surrounding schools released the following statement on their protest Monday:

“The United States was built on a foundation that marginalizes, disenfranchises, incarcerates, exploits, and murders anyone who is not a white, heterosexual, Christian, wealthy, man,” the statement reads. “With the historical of [sic] and ancestral trauma our bodies carry as Women of Color, the murder of Michael Brown, Jr. marks the last straw.”

Thousands of students nationwide walked out of classrooms and protested Monday. The protest occurred one week after a grand jury decided not to indict Darren Wilson, the officer who fatally shot Brown in August.