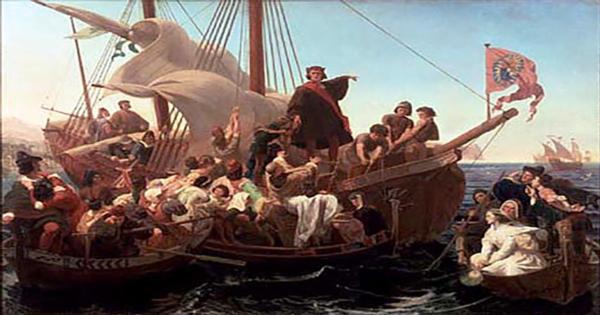 Universities in Alaska and Oklahoma are taking a cue from liberal bastions such as Berkeley and Seattle in celebrating “Indigenous Peoples’ Day” rather than Columbus Day.

Both states have historically had large Native American populations, and proponents view the name-change as a symbolic rejection of the holiday, whose namesake they associate with genocide rather than the discovery of America.

According to KTOO, the student government at the University of Alaska Southeast recently approved a resolution recognizing Indigenous Peoples’ Day as a holiday celebrated on the second Monday of October, the same day Columbus Day is observed in most other parts of the country. The decision breaks new ground for UAS, which previously did not recognize any official holiday on that day.

David Russell-Jensen, a student senator of Alaska Native extraction who co-sponsored the resolution, told KTOO he was inspired by a similar motion passed last year by the Seattle City Council. Although he traced his hostility toward Columbus Day back to an assignment he was given in high school, Russel-Jensen indicated that the matter hadn’t truly captured his attention until relatively recently because Columbus Day is a minor affair in his hometown of Juneau.

“I had an essay assigned to me in high school about whether or not we should even celebrate Columbus Day and so I think that’s where some of my thoughts came about why we shouldn’t celebrate it,” Russell-Jensen explained.

He also noted that he finds the Columbus Day sales held elsewhere in the country to be “kind of weird,” asking, “does that just mean you just walk into a store and just steal whatever you want?”

The University of Oklahoma will soon join UAS in recognizing Indigenous Peoples’ Day, that outcome having been all but assured by recent declarations of support from both of the individuals holding the power to veto the measure, which the student government is expected to pass on October 11.

In a statement reproduced by OU Daily Wednesday, university President David Boren announced that he is supporting the resolution, describing it as part of a larger effort on the part of his administration to improve the school’s emphasis on Native American history and culture.

“I support the effort to use the day recognized by national officials as Columbus Day, to instead be celebrated at OU in the future as Indigenous People’s Day,” Boren writes. “When the Student Congress completes action, I will approve their resolution and work with our student leaders to hold a daylong celebration of Native culture on campus, including food, dance, the arts and culture, and special lectures to more broadly educate our total community about Native American history.”

Noting that the state’s very name is derived from two Choctaw words meaning “red people,” Borden declared that “We must never forget the many injustices in our history in the treatment of Native people and never stop admiring the strength of Native people who have preserved their values and whose cultures and governments continue in the face of terrible adversities and injustices.”

Following Borden’s announcement, Student Government Association President Alex Byron told OU Daily that she, too, will support renaming the holiday once a bill reaches her desk.

The resolution was initially approved by SGA earlier in the week, but has since been amended to revise language that lamented OU’s “lack of welcoming environment and resources available for native students.” The new wording states that the holiday will help to create such an environment while promoting awareness of available resources.

“I do intend to sign the resolution,” Byron said. “In light of what happened yesterday and how it’s getting sent back to senate and the timeline’s being pushed back by a week, the day we would actually be signing it would be Columbus Day or the day in which Indigenize OU wishes to recognize Indigenous Peoples’ Day on campus.”

Indigenize OU, a student activist group, lobbied heavily for the resolution, but has met with less success in a separate endeavor to do away with the university’s “Sooners” nickname, which they claim is offensive to Native Americans whose ancestors were displaced when Oklahoma was opened to white settlement.

In a statement released Monday and reported by OU Daily, Borden indicated that the nickname is unlikely to disappear, asserting that its affiliation with the university has imbued the term with a completely different meaning than it originally held.

“The only way I can see it being changed is for our almost 245,000 alumni to ask for it,” Borden said, adding, “I believe the vast majority would be opposed.”