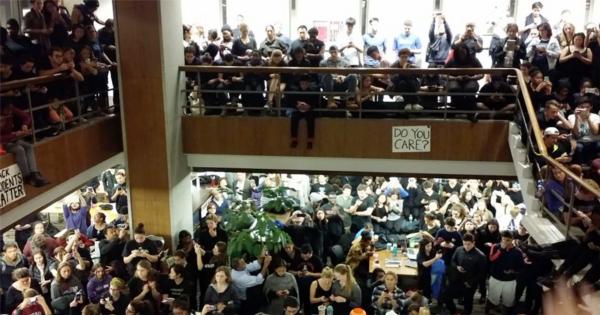 Students at Amherst College are demanding that the school’s president accede to a list of demands that would effectively eliminate free speech on campus.

The demands, which were presented in person Thursday evening to college President Biddy Martin, are outlined in a letter published by Amherst Soul, which also notes that the students expect action to be initiated within “24-48 hours” and completed by Wednesday, November 18 (roughly six days after they were first issued). If those deadlines are not met, they warn, “we will organize and respond in a radical manner, through civil disobedience.”

“We will organize and respond in a radical manner, through civil disobedience.”

The ultimatum grew out of a sit-in held earlier in the day as part of the “Stand with Mizzou” movement, during which members of a variety of student organizations on campus collaborated to identify the actions they believe must be taken in response to the “legacy of oppression” at Amherst, notably through the creation of “safe spaces” and the criminalization of “offensive” sentiments.

“We have begun this movement, Amherst Uprising, in an effort to change the status quo for a more just and inclusive environment within our campus,” the letter states. “We demand that Amherst become a leader in the fight to promote a better social climate towards individuals who have been systematically oppressed.”

Anticipating a negative reaction to their letter, the students also insist that the campus police department “must issue a statement of protection and defense from any form of violence, threats, or retaliation of any kind resulting from this movement.”

More specifically, they want President Martin to denounce the actions of students who displayed “All Lives Matter” and “Free Speech” posters, and to warn the student body that in the future, “racially insensitive” speech would merit disciplinary action.

Not content merely to purge the school of opinions with which they disagree, the students also demand that they be given time off from class and that the school’s mascot be expunged.

“Dean Epstein must ask faculty to excuse all students from all 5 College classes, work shifts, and assignments from November 12th, 2015 to November 13th, 2015 given their organization of and attendance at the Sit-In,” reads the eighth item on the list. A few bullet points further down, they add, “Dean Epstein must encourage faculty to provide a space for students to discuss this week’s events during class time.”

Regarding the school’s mascot, the students want Martin to release a statement by Friday at 5:00 p.m. “that condemns the inherently racist nature of the unofficial mascot, the Lord Jeff,” and to follow up by encouraging the removal of all related imagery from campus.

After the list of demands concludes, the students note that they will require further, as-yet unspecified, action from the administration, as well.

“Please acknowledge that all of these statements of apology are not the end all—that they are only a part of short-term healing and by no means achieve all of the goals we will set forth,” the letter states. “We are in the process of finalizing long-term goals which we hope to collaborate on regularly with all members of the community.”

Campus Reform is currently awaiting comment from Amherst on President Martin’s response to the students’ demands, and will update this story once the statement has been provided.