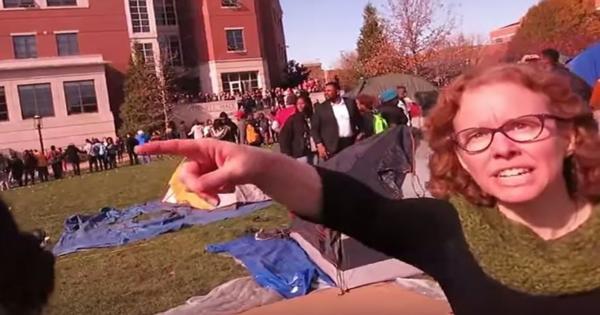 In November, Click was caught on video threatening a reporter who requested an interview with her during an on-campus protest at Mizzou. Click immediately turned down the reporter’s request for comment and told him he needed to leave the protest. The reporter stood his ground causing Click to call out for “muscle” to forcibly remove the reporter from the protest. The video shows Click swinging at the reporter’s camera, leading some to believe she assaulted a student.

Columbia’s City Prosecutor Steve Richey filed a simple assault charge against Click on Monday morning, about two months after Mizzou police sent the case to his office. Click faces a Class C misdemeanor, punishable by up to 15 days in jail and a $300 fine.

Click resigned her courtesy appointment in the Mizzou journalism school immediately following the protest. However, ABC 17 reports that Click will keep her job for the time being.

Interim Chancellor Hank Foley said in a press conference Monday afternoon that Click will continue working while a task force composed of legal and constitutional scholars, MUPD, administrators, and students to look at the events that led to Click becoming a national figure.

"People are held accountable for their actions at the University. This is not being looked over," Foley said.

“The fact that, as a professor teaching in the communication department and the school of journalism, she displayed such a complete disregard for the First Amendment rights of reporters should be enough to question her competency and aptitude for her job. As a professor in the School of Journalism, Click’s role should have been to remind students that we must respect the First Amendment rights of all individuals, and that the student reporters there were doing nothing more than their jobs; jobs which are soundly protected by our Constitution,” lawmakers wrote.

A warrant was not issued for Click’s arrest, but she will be issued a summons to appear in court.