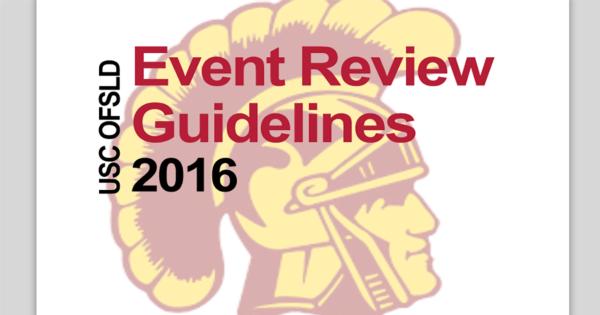 The University of Southern California (USC) is cracking down on fraternity and sorority parties by requiring all Greek organizations to comply with an 11-page list of party rules and procedures.

The list, obtained by Campus Reform, contains dozens of specific rules prohibiting the use of alcohol and limiting or monitoring the numbers of guests in attendance at any given event.

“Any event where alcohol is present must have a guest list. A guest list must be prepared & submitted to FLSD [Fraternity and Sorority Leadership Development] at least 24 hours in advance of the event and contain the names of all guests. Within 48 hours of the completion of the event, a final guest list indicating who was in attendance at the event must be submitted to FSLD,” the document states.

The university, as a result, will be able to keep a record of student attendance at Greek parties.

Last year, the school was already criticized for intruding on students’ sex lives when it asked them to disclose the number of sexual encounters they have had by requiring them to take an online mandatory Title IX training. The school later apologized for the intrusive nature of the survey and regretted “any offense or discomfort” it caused.

Now the school is requiring “women/men” to remain in “the public areas of any fraternity/sorority until 8:00AM the next morning on occasions when alcohol is being consumed,” seemingly attempting to limit sexual encounters.

“In addition, no woman/man shall be permitted beyond the public areas of a fraternity/sorority if either the visitor or any host of that visitor shall have consumed more than two standard-sized drinks in the preceding four-hour period,” the new procedures demand.

The new policies also require fraternities and sororities to hire a minimum of one bodyguard per every 50 anticipated guests at any party where alcohol is served.

“If alcohol will be present or if there are 400 or more expected guests, the chapter needs to arrange for unarmed security guards that are able to demonstrate current licenses and permits as required by applicable laws,” the policy states.

According to a former member of a fraternity at USC, who spoke with Campus Reform but wishes to remain anonymous, the cheapest security guard he has heard of costs $150 a night. For most parties, he said, fraternities will be required to have an average of 8-10 security guards.

In addition, Greek houses are no longer allowed to advertise their events “to the general public” but must spread the word through “invite only.” Fraternities cannot use “open Facebook groups” to promote the event, or any “fliers, sidewalk chalking and banner displays.”

The university is also prohibiting fraternities and sororities from holding themed parties that may be considered inappropriate or racially insensitive.

“Event themes must be appropriate and reflect the best interests of the university community and Greek community,” the handbook states.

While these new restrictions are being passed down to fraternities and sororities, USC’s Model United Nations club hosted a theme party this past weekend called “Castro’s Cabana: Sex, Drugs, and Trap Music” in celebration of an end to “years of cultural isolation” in Cuba.

Other new policies being imposed on Greek organizations include:

— No social events on study days or final exams

— Non-alcoholic beverages and food must be continuously served in ample supply any time alcohol is present. It is recommended each event provide non-salty food options and a separate water station located away from the bar.

— A layout or map of the venue is required, including the locations of restrooms, bars, DJ stages, water stations, security fences, and security guards.

— Social events where alcohol is served by the host student organization are only permitted Thursday until Midnight and Friday and Saturday until 2 a.m.

— Alcohol service must end by 1 a.m. on Friday and Saturday nights

— Alcohol must not be the main “focus” of the event

— Hard alcohol is not permitted at fraternity or sorority chapter houses

The Office of Fraternity and Sorority Leadership Development at USC confirmed the authenticity of the new rules with Campus Reform.