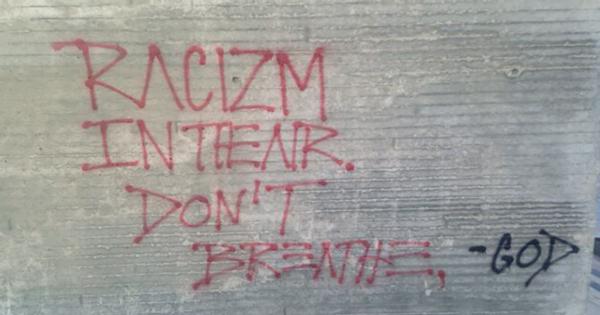 The recent arrest of an alleged college vandal has caused an uproar at the University of Wisconsin-Madison (UW), where students are calling his arrest an act of white supremacy and racism.

Student Denzel McDonald, who goes by the pen name “King Shabazz,” was arrested last week on 11 counts of vandalism, along with one count of disorderly conduct for threatening a bystander who attempted to intervene, a UW police report confirms. According to the report, McDonald threatened to kill a bystander if he called the police.

"You are the bright and morning star of their fondest hopes and we are proud of you.”

“Fuck the police,” “White supremacy iz a dizeaze,” “Death to the pigz,” and “The devil iz a white man,” were just a few of the many messages McDonald allegedly painted.

The damages cost the university over $4,000 in repairs.

The police report states that the UW police department had been investigating the string of graffiti for six months and had attempted to contact McDonald several times over the past two weeks, but multiple visits to his home and several phone calls went unanswered. The evening before officers made the arrest, two more instances of “the same form of graffiti were found” on campus.

Consequently, officers located McDonald in a classroom at UW and asked him to step into the hallways to talk with the officers. McDonald then requested that the conversation be moved outside to which the police officers complied. There, McDonald was arrested.

But now, students are ridiculing the police officers for arresting McDonald “in front everyone” even though the police report states that the arrest was not only made outside of the classroom, but outside of the building—and only after a long conversation between McDonald and the officers.

"I think it's ridiculous that they would disrupt a class and arrest him in front of everyone when the classroom is supposed to be a place that students feel safe," one student told The Daily Cardinal.

Some students have even started a crowdsource to support McDonald financially. Thus far, 58 contributors have raised $1,902 in just 7 days, possibly to cover McDonald’s bail.

“UW campus is not a safe space for students of color,” a page for the fundraiser states. “Recently a fellow brother, King Shabazz, fell under discriminatory discretion of UWPD and the state of Wisconsin. As we work to unite our community and forge collective political agency and love-fueled resilience, it is pertinent that we support him financially.”

A few of McDonald’s professors have also come to his defense, calling on the administration to provide “emergency mental health support” to “all students affected by recent events” in a letter obtained by The College Fix.

“We love you, value you, and trust that you’ll survive as your parents survived the malevolent neglect of the 1980s, your grandparents survived Jim Crow, your ancestors kept faith when it seemed impossible. You are the bright and morning star of their fondest hopes and we are proud of you,” it continues, seemingly equating McDonald’s arrest for being a suspect in a criminal investigation to the racial segregation under the Jim Crow laws.

Other faculty members have even asked that McDonald be given “immunity from expulsion” and called the police department’s response overzealous, according to Fox 29.

Meanwhile, several hundred students will be participating in a campus-wide walkout Thursday, which is titled “We Are God: A Day of Disrupting white Supremacy & Anti-Black Racism at UW-Madison,” presumably in celebration of McDonald, who signed his alleged graffiti with “God.”

His peers, however, were quick to clarify that they in no way were associating McDonald with what they call the “anti-racist art” found on campus over the past several months, which was featured on the Facebook page for the protest.

“This event and photo is in no way meant to associate King with the anti-racist art displayed above, but to associate the message of the art with the anti-Blackness that was rooted in the violation of his rights as a Black student,” a description for the event states.

Prosecutors have not yet formally charged McDonald, who has been released on bail.