The Weekly Roundup: Trigglypuff used Tantrum! It's not very effective...

Campus Reform Staff Director of Journalism Training @SterlingCBeard on Apr 30, 2016 at 9:08 AM EDT 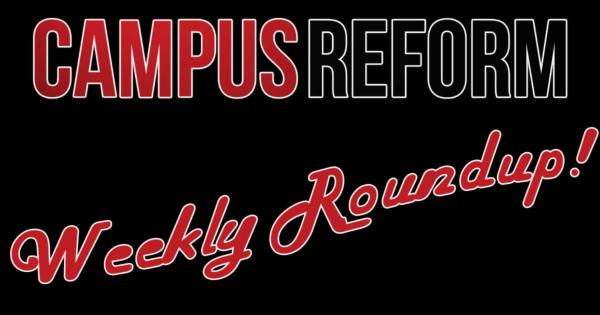 They kept referring to “womyn,” which to us seems dangerously homonymous with the word they’re attempting to excise. Just to be safe, they should consider switching to “wopersons.”

Sure, but as a general rule, they kind of have to be, don’t they? Just imagine how their membership would dwindle if their supporters were to hear the other side of the argument.

Opponents have dubbed the bill an assault on free speech, which is strange, because we thought liberals were pretty adamant that money doesn’t equal speech.

At least ol’ Abe didn’t have to look at them anymore after that.

Clemson prof. tells protesters they have nothing in common with MLK’s legacy

The protesters assure us that he was just blinded by his white privilege, causing him to overlook the myriad revenge fantasies peppered throughout MLK’s speeches.

Disgraced ex-Mizzou prof: I was fired because I’m white

No, you weren’t. You were fired because you were more of an embarrassment to the school than the protesters you were defending. That, plus the whole law-breaking thing.

In all fairness, hating white people might actually be a good strategy for succeeding in college nowadays.

Administrators thought it was a great idea, but then, they didn’t hear anything after “raise ticket prices for athletic events,” so mesmerized were they by the dancing dollar signs in their heads.

Alt: Wait, we thought the sports teams were diversity initiatives.

The Mega Evolution of the Jigglypuff line, the rare and elusive Trigglypuff is identifiable by its wild arm-flailing and inability to comprehend basic constitutional rights. Trigglypuff’s vocal chords can freely adjust the wavelength of its voice, which allows this Pokémon uses this ability to yell at precisely the right wavelength to make its foes annoyed with the concept of social justice.

Despite enticing the creature with rare candies, event organizers were unable to successfully capture it, having no master balls in their inventory.

Even if one accepts the argument that Al Capone is irrelevant because the professor “wasn’t alive at the time,” how does he explain away Wesley Snipes?

Phew! Dodged a bullet, there. The left won’t dare push the idea if there’s a chance that the evil millionayuhs and billionayuhs will benefit from it.

Or was it because their mission was too broad? Or because it overlapped with other clubs’ missions? Or because the group’s founder is pro-life? It didn’t really matter, just as long as everybody could find at least one reason to reject TPUSA’s application.

And the professor just can’t understand why anybody would object to playing the song “Fuck the Police” right after screening a video of the Rodney King beating.

It’s one thing to implicitly condone hostility toward law enforcement, but how could this woman in good conscience subject her entire class to the “music” of Rage Against the Machine?

Yale manages to alienate everyone with naming compromise

In case you need the translation: “Too Eurocentric” means “having any reference to Europe whatsoever.”

But if they don’t learn about the Europeans, against whom will the students direct their hatred?

Somehow, discussing social issues, being “condescending,” or having a political bias never seem to be disqualifying factors for liberal student groups…

Over 100 colleges to host separate ‘Lavender Graduations’ for LGBT students

So much for “inclusivity,” huh?

Well, the game-design students may have missed a chance to meet and learn from their professional idols, but you can bet they learned a valuable lesson about making sure the characters in their games are adequately diverse.